7 Kommentare June 18, 2019by Tim
Hey, guys! Just a heads up: The linked offer is already a bit older and the price of the gadget might have changed or it might not be available anymore.

The manufacturer 360 Mobiles is known as a producer of smartphones, but now also wants to establish itself on the vacuum robot market. For this purpose, the company makes use of the latest achievements and technologies that household robots can bring with them. This could already be seen in the 360 S6 review. With the 360 S5, 360 Mobiles would like to continue the success of the first model and (purely optically) build very close to the Xiaomi models.

At GearBest the robot was officially launched on 15.04. and we already have a test model here. Our first impression. 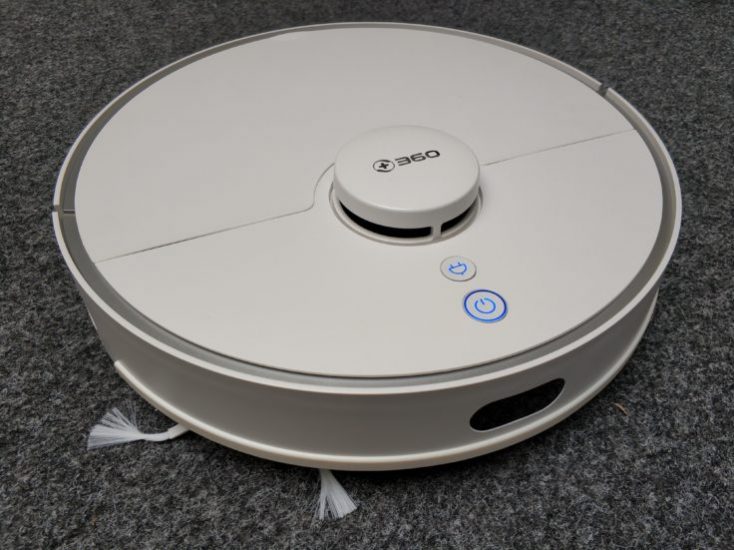 Why does the S6 become the S5? Normally, one number is followed by another number in technology production. In addition, the difference to the Xiaomi models, which also start with “S5”, becomes much more complicated. As can be seen from the technical data, the suction power of the S5 is even higher than its predecessor – and reaches the current best value of the RoboRock S50.

Although the model is only officially available in the shops today, there was no plastic smell when unpacking our test model. Although the robot is brand new, the materials used seem to be of very high quality, so that it doesn’t smell of plastic at all.

The scope of delivery includes besides the vacuum robot:

The scope of delivery is very minimalistic, only the absolutely necessary is included in the package. Therefore no spare parts or accessories are included, this will be available in a short time at GearBest. Nevertheless: It would have been nice to have at least a few additional brush heads as replacements.

The 360 S5 looks like a mixture of 360 S6 and RoboRock S50. Already with the S6 I had the feeling to test a new Xiaomi vacuum robot. But every company does a little copying and the design is quite appealing.

The laser distance sensor (LDS), with which the vacuum robot measures the premises and draws up a map of the four walls, is moved from the back to the centre on the top. The two operating elements have been placed one above the other, and the functions of these have remained the same. A power button to switch the robot on and off, to start and stop it manually, and a button to send the robot to the charging station to charge the battery.

Due to the LDS on the upper side, the robot measures 35 x 35 x 10 cm, which is quite high. Here you have to cut back in favor of the most sophisticated version of the navigation and measure various pieces of furniture before buying. If the robot is to vacuum under the sofa, for example, it must be at least 11 cm above the floor and so on.

The workmanship is as flawless as the predecessor, nothing jolts or wobbles where it should not (at the bumper in front it should of course jolt a bit). As with the Xiaomi models, Qihoo, the manufacturer, didn’t save on material. High-quality plastic with individual metal elements – that’s how I praise it. To the other manufacturers: Feel free to imitate. The 3.5 kg weight are average, in general the robot is rarely lifted as soon as it is connected to the app.

First impression when unpacking the charging station: The charging station is very chic, but also really huge! In terms of size, only the models with an extraction station can keep up. But the station has some practical features. Everybody knows the main function by now: This is where the vacuum robot moves when the battery power decreases (with the S5 at 20% remaining battery power). Thanks to the laser distance sensor, retrieval is very fast and unproblematic.

The underside of the charging station is covered with rubber, which ensures a safe stand on almost all surfaces.

Also nice: As with all top models, the cable can be rolled up at the rear of the charging station. So it does not get in the way and offers no risk of tripping.

The most exciting part of the charging station does not bring any real advantage, but it is very unusual and funny to look at. The 360 S5 has the contacts for charging the battery in the back instead of in the front. In order to be able to bring the charging plates to the station’s sensors, it has to park backwards as soon as it locates the charging station using the LDS.

How does this work? See for yourself:

As mentioned, it looks very funny, but is not a technical advance. Much more practical: The robot continues cleaning as soon as the battery power decreases and continues to work. Provided, of course, that the working time of 2 hours is not sufficient to complete the work on the premises. The loading time of 3 hours is very short and exemplary for a robot. Normally two hours longer.

Performance and operation of the 360 S5

On “normal” ground, i.e. hard floors, the suction power of the robot is always between 1200-1500 pa, on carpets the robot increases the suction power to 2000 pa. The latter value is still the ultimate for all models available so far. The BW-VC1 from BlitzWolf is about to top this value, and according to the technical data sheet Viomi is also bringing even more to the scoreboard with their new robot. However, these values still have to prove themselves in the test.

The obstacle overcoming of 2.5 cm is also a strong value if it occurs in practice. The same applies to gradients of 25°, which the S5 should be able to take on. However, we will check this in detail in the next few days.

The S5 works with only one brush head, as we know it from the Xiaomi vacuum robots. This is not a disadvantage, as the robot drives the entire premises on the right (turns to the right etc.) and then sweeps dust and dirt with the brush head in the direction of the intake hood on the underside.

In the Quiet, Standard and MAX suction modes, the robot works its way through the four walls. Of course, the suction power varies depending on the mode, and the operating volume also goes hand in hand. According to the sound level measurement, the operating volume at the highest suction level is 65 dB, whereas in quiet mode it is only 45 dB.

If the robot works while its owner is on the road (for which one has a vacuum robot), of course the highest suction level is recommended. If you are at home, however, and want to keep your peace AND let the robot work as much as possible, the Silent Mode is of course recommended.

As is so often the case with vacuum robots, a SLAM algorithm (Simultaneous Localization And Mapping) works inside the robot to optimize navigation and the creation of a map of the premises. Three different suction modes can be selected manually and used autonomously:

The most exciting feature: With the 360 S5, a completely individual cleaning plan for the home can be created with all imaginable specifications. However, this requires the app control, so that you can also define no-go zones, different cleaning modes at specific locations and virtual walls on the map created by the mapping. This comes very close to the dream of a perfect cleaning result for your own living space.

How well this works, we will still test in detail, as mentioned we got the robot delivered only today. Fact is: To create such a cleaning plan you need the app control. More about that now.

The same procedure as when testing the 360 S6: The App 360Smart (Android, iOS) again demands all imaginable permissions from the user, even access to photos or phone calls. But the nice thing is: You don’t have to grant the app any of these permissions permanently, almost everything works without them. If you don’t need a picture of yourself or something similar in the app, you can save data here.

To register you need a mail address (best use disposable mail address) or your phone number. If you dial the latter, it is advisable to use a fake mobile phone number for privacy reasons, which you can find with a short search query on Google (various providers). Don’t forget to select the correct region from a list here. Then you get a six-digit verification code via SMS to login. Once you have entered everything, you can start the connection with the WLAN.

Connection with the WLAN

The next step is to connect the robot to the WLAN and thus to the app. After downloading the app and complete registration, the following steps will guide you to your goal:

Connecting to the app is all in all very quick and easy. Only the data collection rage of the manufacturers is annoying again, that’s how it is nowadays.

Functions within the app

After the somewhat annoying processes, the app now gives us an overview of the functions and setting options of the robot. Very clear interface, the symbols clearly show what is behind which click.

The functions within the 360Smart App listed:

Draw No-Go zones on the created map, save the maps and generally the app control is included. This allows the vacuum robot to be started and stopped from anywhere. Of course, you are also informed about the current status of the robot via push notification. As you can see, the top features are all there again. Here is a first impression of the mapping, including no-go zones and go-to zones (zones that the robot should particularly travel through):

The obstacle detection is almost optimal, you don’t have to worry about crashes with pieces of furniture. Finding the charging station again is a matter of seconds, the live mapping as such works perfectly and there is nothing to complain about when it comes to processing. Of course, it has to be said that the wiping function is missing, which is not always bad considering the mostly weak wiping function of a vacuum robot.

The 360 S5 is a serious Xiaomi competitor to the suction robot throne and is in no way inferior to its predecessor, the S6. The relatively low price is a price you can pay with a clear conscience for a vacuum robot with such a range of functions. This means that it is currently only slightly more expensive than the Mi Robot. For me currently a top 5 model, which doesn’t have to hide behind Roborock and Co. On the contrary.

Is the 360 S5 a potentially interesting model for your four walls?