0 Kommentare September 3, 2019by Tim
Hey, guys! Just a heads up: The linked offer is already a bit older and the price of the gadget might have changed or it might not be available anymore.

In my home the 360 S6 has been working for a long time, followed by the S5 and S7. A few days ago I wanted to check for a firmware update and discovered the following:

Is the 360 S7 Plus just an optimized version of the 360 S7 or a stand-alone model? When asked by the Chinese tech giant Qihoo, who is responsible for the 360 vacuum robots, we were informed that a press release on the model will be issued on September 19. But we couldn’t wait that long and searched on our own. Here you can find all known infos. 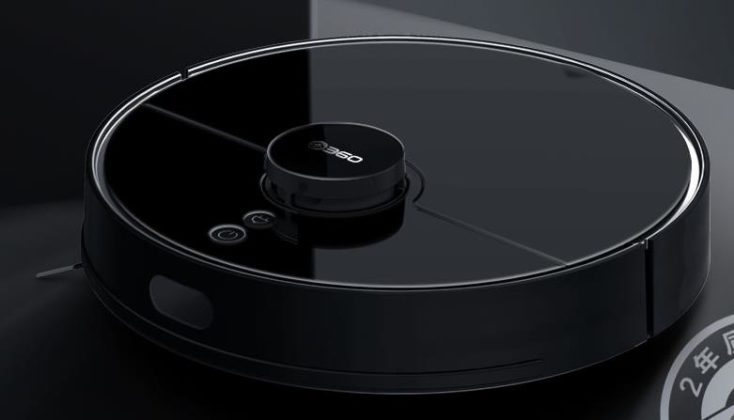 There is no precise information on the S7 Plus for carpet detection with the wipe function attached. However, it can be strongly assumed that this technology will also be installed as with the predecessor. The Alexa controller will only be available when the robot is sold outside China. Since all models of Qihoo 360 had a CE-mark so far, one can expect this good conscience also here. Provided that the S7 Plus is even conceived as an international model (which is to be assumed).

The obvious first: Compared to the S7, the S7 Plus is kept in black. It looks deceptively similar to the Deebot Ozmo 950 and the Roborock S6. Personally, I think it’s a bit unfortunate that the manufacturers are squinting so much at each other, on the other hand it’s common in the industry.

Within the app you can probably set the amount of water that should drip from the water tank onto the microfiber cloth. It is not possible to say exactly what the wiping modes are all about. We assume that the robot, like the ZACO A9S, has a vibrating base plate on the underside, a kind of “vibration water tank”. Accordingly, the wiping modes are presumably three steps different depending on how strong the vibration is to be exerted.

What I don’t like at all: Disposable wipes are included (where does this trend suddenly come from?), which I didn’t like with the Roborock S6 either. This is absolutely not environmentally friendly. But the included plastic pad for the charging station, which is familiar from the Roborock models, is practical. This prevents the robot with the wet microfibre cloth from forming puddles on the floor in front of the charging station.

Apart from that, there are a few marketing promises that need to be examined more closely. According to this, the “cleaning efficiency was increased by 10 %”, which means that the robot should need up to 20 minutes less for cleaning. In addition, it should be able to “master problematic situations faster and better”, which is not more precisely defined. In other words, he should be able to free himself better when, for example, he is fighting with the clothes rack or something similar.

The latest feature of vacuum robots is floor storage. This allows house owners to use their vacuum robot on up to three floors at the same time. Of course, this can also be done with other vacuum robots, but the highlight is that the visually created maps are stored. So the 360 S7 Plus always knows where it is, can independently optimize the cleaning path on the respective floor and the user can draw virtual walls and even “non-wiping zones” on the map. This allows the user to define areas that the S7 Plus should not cover. And that for every floor.

The software package also includes the room layout, which is provided by current high-end models. The robot divides the four walls into the individual rooms on its visual map. In this way, it is possible to have the household helper clean individual rooms at different times. In addition, a sequence can be defined if all rooms are to be processed one after the other.

f the floor storage works as easy as the new Ozmo 950, the feature is definitely a selling point. The price for the S7 Plus is also lower than that of the 950.

Not so much is known yet, we expect more information in the next weeks. 2599 Yuan, that is $364, costs the vacuum robot for the Chinese market. Of course the price for the device in the China shops will be above $400, but Qihoo 360 is also known for a good price level. With a little luck, the price is also lower. When the device will be listed in the shops is still unclear, we expect it from mid-September, as we were put off by the manufacturer himself for this time.

But not to mention the price, the S7 Plus has a real bulwark of functions, especially the floor storage. In fact, the technical differences to the 360 S7 are marginal, but this will also have to prove itself in practice. We at least liked the Qihoo 360 models so far, because the price-performance ratio was right and the robots are very mature.

What do you think: Does the 360 S7 Plus have a chance on the vacuum robot throne?