0 Kommentare April 27, 2022by Anita
Hey, guys! Just a heads up: The linked offer is already a bit older and the price of the gadget might have changed or it might not be available anymore.

First, you take a desk lamp, a Bluetooth speaker and a cell phone holder. Then add a wireless charging function. If you mix everything well, you get the 4-in-1 desk lamp from EZVALO. But do you get a small multitasking miracle for $43.69 or only half things delivered after all?

Not only my eyes sparkling when I opened the box, but also the packaging itself is decorated with sparkling and matte gold accents. The combination of turquoise and gold looks classy and the box makes a solid impression as well. If you wanted to give the multifunctional lamp as a gift, you would only have to stick a bow on it. The box contains the gadget, a USB-C charging cable, and a small user manual.

EZVALO has not only gone all out with the packaging. The table lamp also convinces with a minimalist and modern design and could easily come from a Swedish furniture store. When folded, the gadget measures 8.6 x 7.8 x 2.4 inches. If you fold the lighting arc upwards, you get a total height of 5.7 inches. The whole thing weighs around 29 oz. But let’s start from the bottom: The 4-in-1 lamp rests on four synthetic legs.

Each leg has a small silicone foot tip. These give the whole item a secure and stable stand. On top of the legs is the circular 360° Bluetooth speaker, which is covered by a mesh material. The next and final “layer” is the wireless charging station. It is made of plastic, in the middle of which is the charging pad.

This is marked with an X-shaped symbol made of silicone. On the edge is a button (also made of silicone) for operating the device. Finally, there is the illumination arch, which is made of metal on the outside and bright plastic on the inside. The lighting arch is attached like a kind of handle and can be swiveled by 180°. The whole thing is illuminated with the help of LED lights.

Obviously, before you can use the gadget, the first thing you need to do is charge it. If you want to listen to music, you have to turn on the table lamp first. This is done by pressing and holding the “Play” icon for about three seconds. You are greeted by a melody that tells you that the lamp is on and ready for use. Next, you have to turn on the Bluetooth function in the phone settings and connect to the box called “EZVALO Lydia Pro”.

Pairing is very quick and uncomplicated. If you want to skip a song, you can do that by holding down the “plus icon”, click on it briefly, then increase the volume. The whole thing also works with the “minus symbol”, only that you reduce the volume or jump to the previous song.

To use the lamp, you need to tap the lighting arc, which is adjustable 180 ° and, incidentally, also acts as a cell phone holder. The light of the lamp is really pleasant. It is not a glaring white, but rather goes in a warm direction. Even in a darkened room, such as a YouTube studio😉, the light does not seem too bright or intrusive. The light is also dimmable. Touching it once equals 30% brightness, touching it twice equals 70%, and touching it a third time equals 100%.

The lamp turns off the fourth time you tap it. By the way, you can also use the lamp independently of the jukebox, the other way around is also possible, and you can use both at the same time if you want. And if that’s not enough multitasking, you can also charge your smartphone, if it is compatible with Qi charging by simply placing the phone You simply have to place your phone on the charging pad. In addition, the gadget has to be connected to the power socket, otherwise you can wait a long time for the phone to charge.

The sound quality of the 4-in-1 desk lamp leaves something to be desired. Especially when you prefer to enjoy music quietly, a distinct humming can be heard. The higher you turn up the music, the more this whirring disappears. Speaking of turning up the music: The volume that the device reaches is, in my opinion, quite decent. Partially even so loud that I found it unpleasant, but that’s probably because I’m simply too old for loud music.

The sound itself seems a bit scratchy compared to the Tribit XSound Go, whose sound was much smoother and velvety in a direct comparison. In return, it cannot keep up with the volume of the table lamp speakers.

However, what surprised me about this gadget was the Bluetooth range. According to the manufacturer, the range is 10 meters, but even at 20 meters (including a wall and a sliding glass door), the music continued to play unhindered. Another positive thing I noticed was that the Bluetooth battery level was displayed on my phone’s screen. That’s convenient, because you can see directly when you run out of battery power.

The manufacturer states that the lamp should shine for around 24 hours before it needs to be recharged. We did not test it in 24h continuous operation, but even after 5 h I did not have to recharge the lamp, but could simply continue to use it the next day. Listening to music for several hours was no problem either. After a little less than 5 h, the speaker then gave up. So exactly as the manufacturer has also indicated.

Of course, wireless charging only works with smartphones that also support Qi charging. If you do not know whether your phone supports this type of charging, you can check the manual or Google it. If you use an 18W charger like this one from TOPK, the Ezvalo 4-in-1 table lamp allows an output line of 10W – standard. So in the test with the Xiaomi Mi 11, you can charge it wirelessly, but not at full speed. Sure it takes longer than with a quick charger, but it works. Just remember that the gadget has to be connected to the power supply. 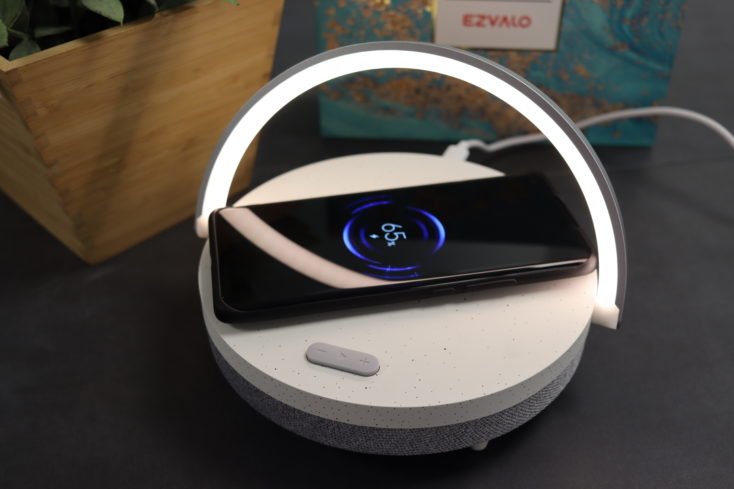 II think that the device really makes something visually. It looks really chic and doesn’t take up much space either. If you fold in the lighting arc, it also fits easily on the bookshelf (vertically) or in a backpack. I find the lighting very pleasant, as it emits a warm white. It invites you to relax in the room in the evening, with your favorite drink in hand while listening to your favorite podcast.

I would give the speaker an “OK” for the sound, since you can hear a whirring at low volumes, which should not be the case, of course. Nevertheless, you can turn up the speaker properly. And the range of just under 20 m I also find very impressive. If sound is your top priority, you should rather go for the Tribit XSound Go. It is handy and offers a really nice sound.

All in all, the 4-in-1 desk lamp has convinced me, it keeps what it promises and partly even more.

I love everything that is practical and makes everyday life easier. No matter whether smart technology or curious gadgets. For you I plunge into the vastness of the World Wide Web and research the latest trends.