2 Kommentare November 13, 2020by Tim
Hey, guys! Just a heads up: The linked offer is already a bit older and the price of the gadget might have changed or it might not be available anymore.

Electric air pumps such as the Mijia version have their right to exist on the road. So you can quickly inflate your bicycle tires and, depending on the model, even car tires. They must be small and easy to transport. But why do you need a small wired compressor? We have tried the 70mai compressor. 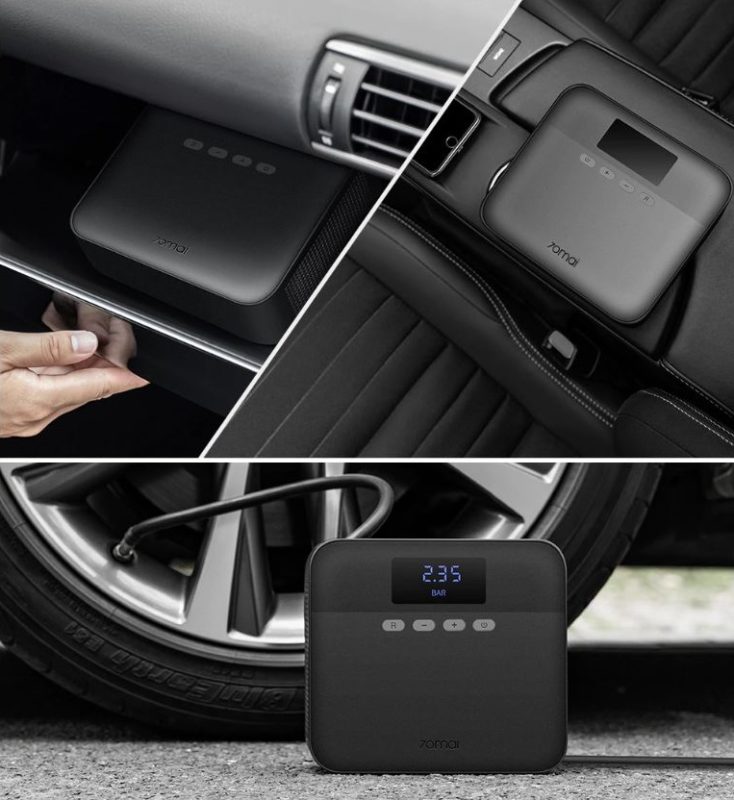 The name 70Mai did ring a bell. How do I know them? A quick look and I discovered: Yes, this brand is also sold by Xiaomi, even though they really only appear here as dealers in the form of their Xiaomiyoupin online platform. But that explains the fancy product photos, which are always at the top of all articles on Xiaomiyoupin.

Scope of delivery, design and processing

Compact, beautiful and affordable – this is the claim 70mai pursues. This is also true for the scope of delivery, which includes the compressor itself as well as an English operating manual.

You don’t need more to operate the small compressor. Everything is self-explanatory, the manual is small and fine, but also not necessary. Depending on what you want to pump up, you will of course need different attachments. These can be found “inside” the compressor, so to speak, on the bottom side when you lift the flap there. 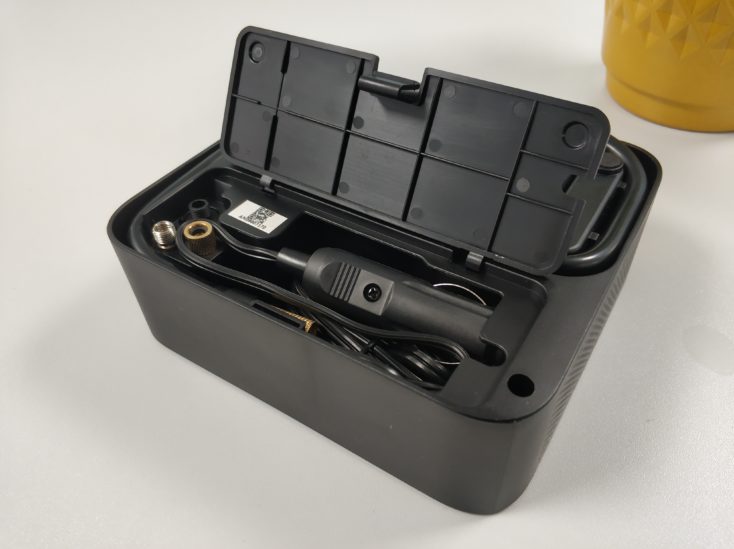 The design of the Xiaomi air pump appeals to me more personally, the 16.4 x 14.8 x 5.4 cm small block has rounded corners, but still looks very angular and clumsy. The weight of less than 3 kg allows it to be taken along on the road, but it should be a little lighter. Due to its shape, the compressor does not fit into the bike’s cup holder, but that’s not what it was designed for – it’s for the car.

While the Xiaomi and Roidmi air pumps could also be designer models, the 70mai version of an electric air pump is more functional.

We probably don’t need to explain the term “electric air pump” in more detail, but let’s simplify it anyway: Compression is used to generate compressed air in electric air pumps and compressors and enables the inflation of bicycle tires, balls, and the like. So you don’t have to pump yourself, you only have to charge the compressor battery from time to time. But now the 70mai model is wired. The 3.7 m long cable is cleverly concealed and pushed into the background on the product pictures, but plays an important role in the purchase decision.

The 70mai pump is advertised as being easy to transport in a car, so that you could test the air pressure or even inflate the tires in between. A car adapter is also included. Thus a small unique selling point among the devices of this kind, which we tested so far. Which becomes clear when opening the flap: The 70mai pump can only be used in a car.

No battery, no other connection possibility than the car cigarette lighter – ergo only usable in the car. That’s a bit of a shame, because not everyone takes their bike with them on car trips. But well, let’s hope that the compressor does a good job as a car gadget. For the car it remains practical, of course, especially since you don’t have to worry about a dead battery and the device is almost always ready for use.

The operation of the pump should not overstrain anyone. Plug the 3.7 m long cable with car adapter into the cigarette lighter, select one of the three attachments, pull it out and screw it onto the longer, thicker cable.

Then just switch on the compressor and let air in or out using the controls on the top (plus or minus button).

At least according to the description the 70mai pump has more power than the Xiaomi version. They both have a pump pressure of 150 psi (10.3 bar), 70mai comes up to 160 psi (11 bar). Values that we cannot measure, but the difference is not too serious. So with the 70mai pump you can pump up bicycle and even car tires.

According to the manufacturer, a “medium size tire” is fully inflated in less than 5 minutes. When the preset pressure is reached, the compressor stops by itself.

With an operating volume of 78 dB, the device is not exactly quiet during inflation, but that’s what compressors are supposed to do. For the time frame I don’t find this really disturbing or too relevant.

You have to be a bit careful with the cables, I almost slammed the car door when trying out the device. Just keep that in mind 😉

The electric air pump from 70mai does what it should. It is also available in stylish and wireless from Xiaomi. But the 70mai version is a bit cheaper and comes with a car adapter, but can only be used in a car. It’s not really the most innovative device, but the price is reasonable and the compressor is usable, fulfilling its purpose without solving an everyday problem significantly. Whoever can use such a device, does not do anything wrong with it.

Practical if you can save yourself the trip to the gas station to fill up the tire pressure. This is also an emergency solution on the road, in case there is not enough air in the tire. The price is also fair. Nevertheless, it must be said that comparable models are also available at Amazon.

Who of you has an electric air pump at home?