0 Kommentare November 9, 2018by Thorben
Hey, guys! Just a heads up: The linked offer is already a bit older and the price of the gadget might have changed or it might not be available anymore.

Somewhere it is in the nature of humans (especially men) to duel, be it by drinking beer or at the console. From time to time you want to let your fists fly, but this is neither clever nor legal. If you are still looking for a cheap gift for your younger relatives or a job in between, you should take a closer look at the 777-615 RC combat robot. Time for a duel

Of course, the purchase of the robot does not really make sense, especially not if you only order one. To be able to fight, you need an opponent of course, accordingly you can also buy the robot in two color directions (black and white). Or you can let the 777-615 (what a name) compete against the DIY 004 boxing robot, it probably has no chance against the Geio fighting robot. 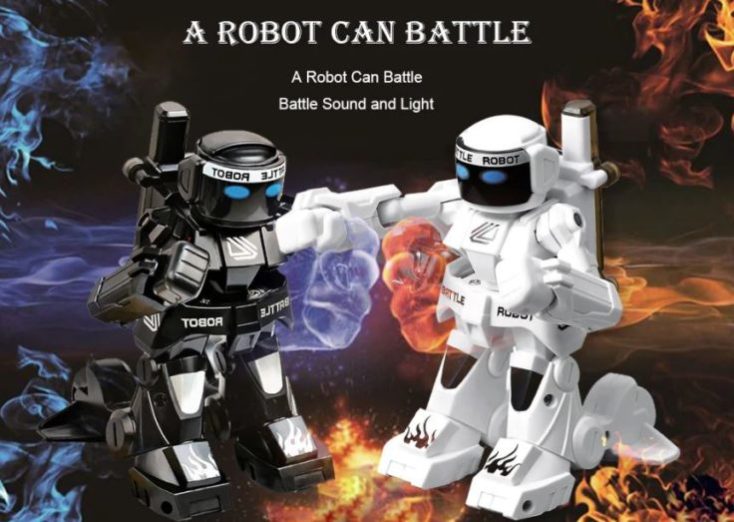 So let’s assume that we have two of the powerful robots at hand: by remote control we let the two robots perform boxing blows and direct their movements to a distance of 10 meters. In a blow test, the 20.5 x 19.5 x 9.0 cm small robot combines light effects with sound noises.

A hit on the opponent’s robot will result in a change of the glowing light on the robot, five hits will end the fight and the robot will switch off. The working time of the 777-615 is 25 minutes, so you can also fight longer fights. Otherwise the charging time is only 25 minutes and you can get back in quickly.

For the charging transmitter you need four AAA batteries, which as so often with China orders are not in the scope of delivery.

Is the 350 g light robot the ideal toy for the little ones? We would say: Yes. It’s certainly fun to fight with two robots against each other, but the fun will probably will only last for a short time. In addition, you need two models, so the price for two robots isn’t that low after all. But: For a cheap fighting robot you get quite a lot here.