0 Kommentare August 8, 2019by Jens
Hey, guys! Just a heads up: The linked offer is already a bit older and the price of the gadget might have changed or it might not be available anymore.

Everything on this little loudspeaker screams “Retro”! The design alone makes the hearts of video game fans beat faster from the very beginning. We ordered the “Retro Cube Speaker” from 8Bitdo ourselves and listened to it to see – or hear – if it is also suitable for sound. 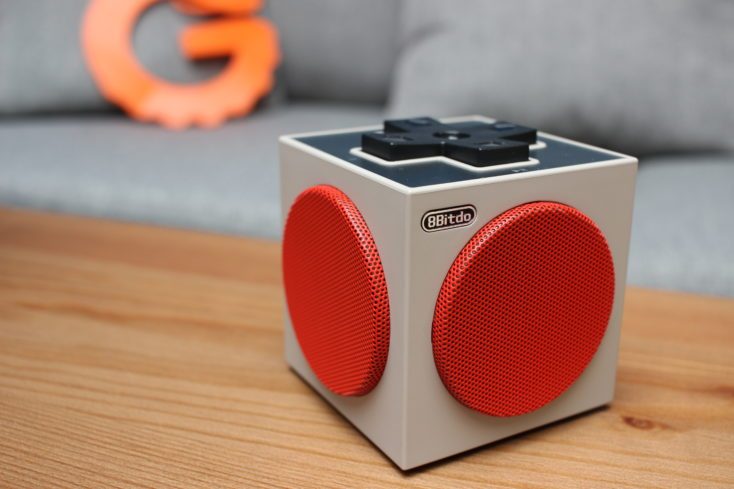 If you’ve heard of 8Bitdo before, it’s probably because of the Bluetooth controllers that the Chinese company normally makes. We’ve already tested some of these controllers that work with smartphones, laptops or even Nintendo switches. Especially the retro design is very popular, but also the functionality is convincing.

Here we have a Bluetooth speaker that, how could it be otherwise, is also based on the design of classic Nintendo controllers. The speaker is no longer a new product, but has found its way to us only now. Let’s take a closer look anyway.

Those who made their first video game experiences with the NES like me hopefully are also impressed by the look of the speaker. The controller may not have been ergonomically designed, but we didn’t need it back then. The main thing was that it got along with the fingers that were greasy with chips and also survived the fall to the floor caused by frustration. 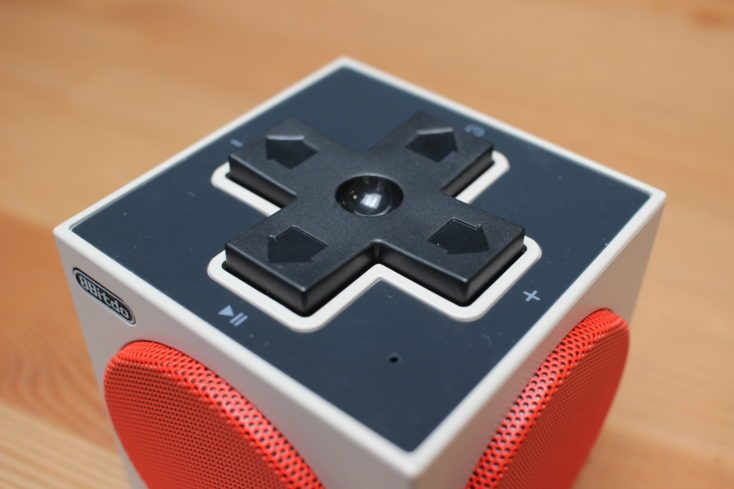 Here the “boxes” are the buttons; the controls are based on the control pad, and reflect the look of the original very well. The red covers conceal 2 1.5W speakers and the built-in 900 mAh battery provides up to 8 hours of battery life. By the way, the red covers are made of metal, the actual cube of plastic. There are two connectors, a micro-USB slot for charging the battery and a 3.5 mm jack plug.

The workmanship is good to very good. There are only noticeable gap dimensions on the underside, the keys can be pressed pleasantly and the surface also feels good. We didn’t do a break test, but I can imagine that the speaker doesn’t stand up well to crashes on hard surfaces. So be careful with it – even if this is true for all Bluetooth boxes, of course. 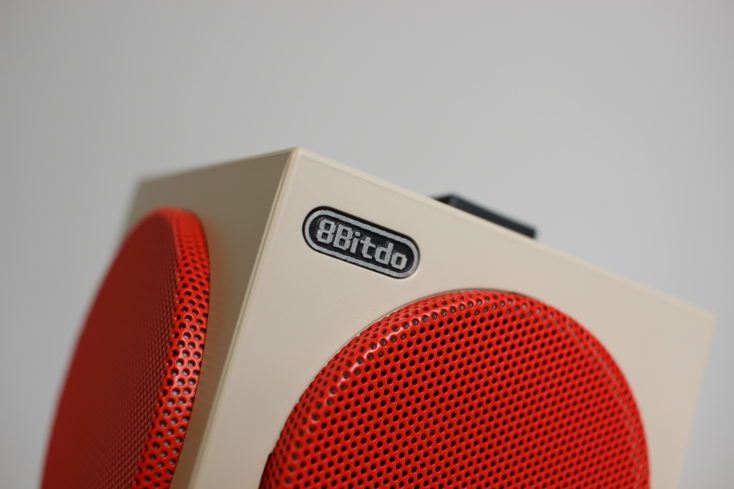 All in all, the Retro Cube Speaker is simply a really nice loudspeaker that should appeal more than fans of the old consoles.

The whole speaker comes in one of these hard plastic packages in which small electronics or tools are often packed. I hate these packages because they’re the ones where you can get bloody hands if you open them carelessly. With bare hands this is almost impossible, and even with scissors it doesn’t work immediately. And of course there is no question of reusing them. Just quickly away with it.

The small cardboard box containing the cable and instructions is really nice. It’s based on the old NES console and looks really nice. It would be a shame to throw this part of the packaging away. 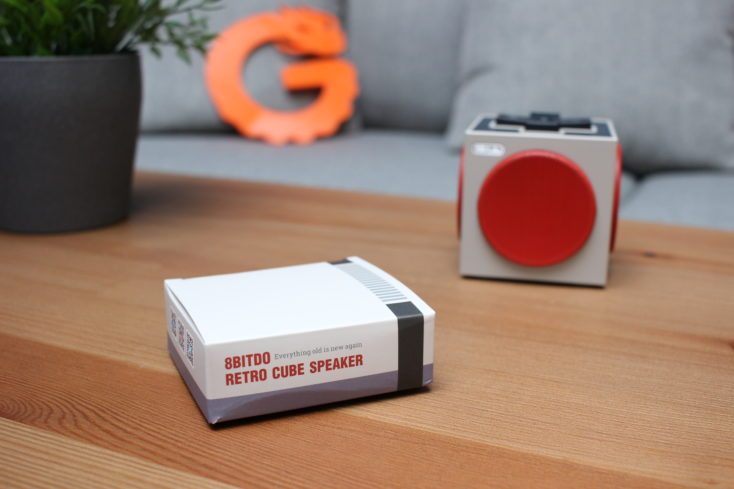 Music can be played both via Bluetooth from your smartphone, and via included audio cable. All in all you can’t expect any sound miracles, but if we are honest, this speaker is also bought more because of its cool looks. The sound isn’t bad, though. The sound never gets scratchy, even at high volumes, it just stays a bit flat. Of course you don’t get a booming bass here, but there are other models for that. Have a look around under our Bluetooth speakers.

The Retro Cube Speaker can theoretically also be used to answer calls by pressing the Play button. Since a microphone is built in, you can also make phone calls and hang up by pressing the button again. Nice function, but also almost standard even with cheap loudspeakers.

A small personal highlight doesn’t have much to do with the actual sound of the speaker. This is the short jingle that is played when the speaker is switched on – a short, sung “8Bitdo”. I listened to it 20 times in a row at the beginning, and still think it’s great.

In terms of sound you get what you expect from the price. The speaker is not a party machine, but a loudspeaker for relaxing on the sofa or balcony alone or in pairs. In addition, there is the really charming exterior, which for most people should be the main reason for a purchase. Not everyone has a speaker in this design ?

If you’re looking for a loudspeaker that can also create the atmosphere at your house party, you can take a look at the Anker Soundcore Motion+.