4 Kommentare April 21, 2018 by Maike
Hey, guys! Just a heads up: The linked offer is already a bit older and the price of the gadget might have changed or it might not be available anymore.

The SF30 Pro does the same thing as the other models from the Chinese gamepad manufacturer. In addition to its cool retro design, it is compatible with most devices and operating systems. We received a gamepad from Rosegal and tested it with a smartphone and switch. 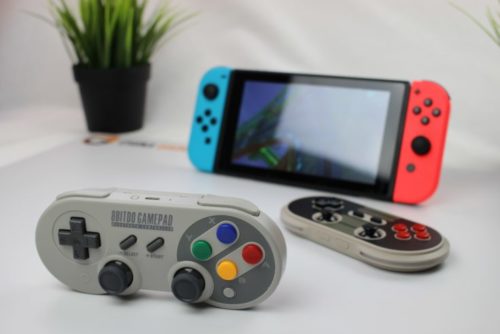 There are two almost identical controllers with the names SN30 Pro and FN30 Pro. The only discernible differences between the two are the colouring and the curvature of the round buttons. Both are very similar in design to the NES30 Pro. The number of keys is the same and almost the same. The most noticeable change compared to the original SNES gamepad is the two control sticks, which are more like a Playstation controller. 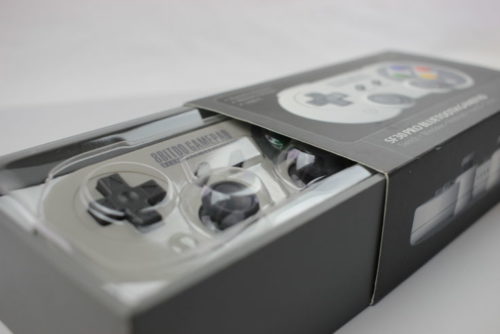 Experience has shown that 8Bitdo, which specializes in controllers, has a good to very good workmanship. Here again, we have no reason to complain. 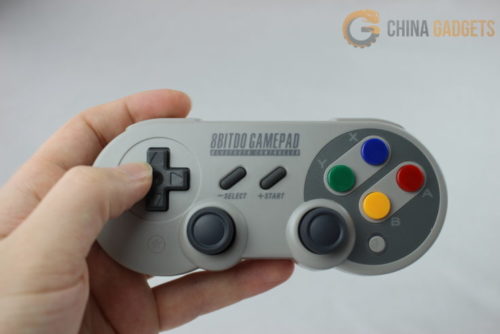 However, the FN30 Pro is slightly larger and fits better in the hand. The sticks are also slightly larger, which makes them easier to use. The shoulder buttons are also placed one behind the other instead of next to each other, as you are used to with consoles, and can be pressed much more comfortably. Especially these two points make the FN30 Pro the better controller.

It is charged via USB-C cable, which is also included in the delivery. The built-in battery has a capacity of 500 mAh and lasts up to 16 hours with one charge. There is a rumble function, but it is not HD rumble and not supported by all games. For me personally, the vibration is a bit too strong and too loud. But I’m someone who always turns off the rumble function when I have a choice. Those who basically like the option might see it differently here as well. 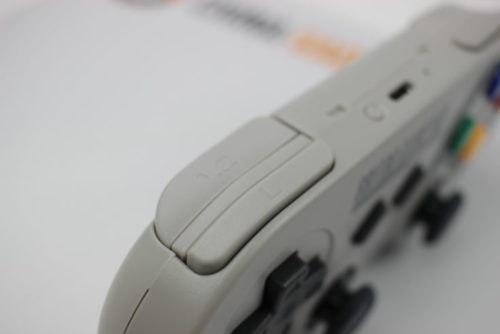 According to the manufacturer, the controller is compatible with Windows, Android and macOS. In our test with the NES30 Pro, the connection with iOS did not work, but everything else did. Switch on Bluetooth on the mobile phone, switch on the controller, and after a few seconds it appears as “Pro Controller” in the list of available Bluetooth devices.

This model can also be used with the Nintendo Switch. I still use the NES30 Pro as an additional controller for my switch. The NES30 Pro video shows you how to connect to the switch:

With the SF30 Pro it is even a bit less complicated. I was able to connect it to the console immediately after unpacking. The pairing took about 3 seconds and we could start immediately.Of course, we also tested using both controllers simultaneously with the switch. There were no problems in the game with two Joy Cons and one NES30 Pro and one SF30 Pro each.

8Bitdo or Pro Controller for the switch?

The controller is with $30-40 clearly cheaper than the official Nintendo controllers. However, there are copies of the Pro-Controller for similarly much/less money, and they are even better in the hand because of their size. However, the quality of third party manufacturers differs widely. 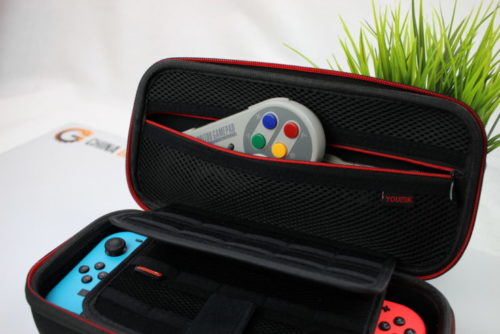 The 8Bitdo controllers have the retro design that many fans appreciate. Especially the SF30 Pro is hardly inferior to the larger controllers in handling, and the smaller size has another advantage. If you have a suitable transport box/bag for the Nintendo Switch, you can easily stow away the controllers. So if you value portability higher, the 8Bitdo gamepads are definitely something for you.

Here you will find even more accessories for the Nintedo Switch, such as hardcases or charging stations.

Deciding whether the controller is for you is actually quite simple. You like the retro design? Are you looking for a gamepad for gaming on your mobile phone or an additional controller for the switch? There’s nothing wrong with the 8-bitdo models. Only iOS users will have problems.