0 Kommentare December 18, 2021by Tim
Hey, guys! Just a heads up: The linked offer is already a bit older and the price of the gadget might have changed or it might not be available anymore.

With the ADO A20F, we’ve had the fun of trying out an e-bike again after a long time. It comes with pretty fat 4 inch tires and pedal assistance up to 25 km/h. How the construction looked and for whom the e-bike pedelec is worthwhile, we clarify here!

We received the ADO A20F directly from the German warehouse with fast shipping. It is very well packed in the large carton, padded and tightly lashed with cable ties. In the box is not only the bike itself, but also an instruction manual, assembly tool, an air pump, cell phone holder and charger with EU plug. 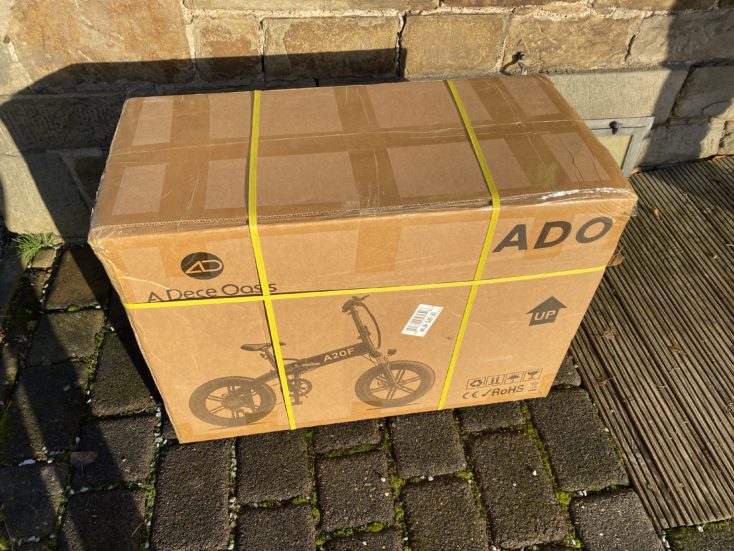 The assembly tool does what it is supposed to, but is then also ready for the garbage can. At least the multitool is not really high-quality, but the Allen wrenches are okay. However, ADO could have saved the air pump and the cell phone holder. The two accessories are so poorly manufactured and made of such cheap material that the actually good first impression of the bike itself is spoiled rather than an added value.

The assembly of the ADO A20F e-bike takes about 15-30 minutes. After unpacking and removing all the foam material, the handlebars have to be aligned, the pedals screwed tight, the chain greased and, if necessary, the gears adjusted.

The 10 cm wide off-road tires must also be inflated with two bars of air pressure. However, you should not use the included air pump for this. We can recommend the Xiaomi Mijia 1S electric air pump. A standard hand pump will also do, but not the one from the accessories.

For the sake of testing, we used the supplied tool for assembly, but I would not recommend it. The material from which the tool is made is much too soft and bends too quickly when tightening.

The pedal assistance is adjustable in three different strengths. While the international supports up to 35 km/h or accelerates in e-bike mode up to 35 km/h and at 500 watts of power without pedaling, the EU version is throttled. This performs a maximum of 250 watts and the motor works only supportive, so the ADO A20F falls under the Padelecs and is legal in Countries like Germany, without registration, as a normal bike, usable.

Even with the first test ride, it is noticeable that the motor starts a bit sluggishly. Compared to other e-bikes that I have already been able to test, the motor, which is located in the rear wheel, takes about two seconds longer until the support kicks in.

Due to the compact foldability of the e-bike, you don’t exactly sit sportily here. Riding without motor support is not much fun, also because the ADO A20F weighs 34 kg. Due to the horizontal position, pedaling is particularly strenuous.

The ride itself, on the other hand, is comfortable with the assistance switched on. The fat tires absorb bumps on all kinds of surfaces. You will not be shaken here. Even off-road, in the forest over hill and dale, is both the downhill, as well as uphill effortlessly to cope.

With the installed suspension fork, it is a cheap steel spring model. During the ride, even off-road, this but practically never bounces, because the tires of the ADO A20F are already capable of absorbing virtually all shocks. Unfortunately, there are no options to adjust the sensitivity of the suspension fork, and its workmanship is also rather average.

The Japanese manufacturer Shimano is the measure of all things in terms of gear shifting of bicycles. The ADO A20F has a 7-speed gearbox from the manufacturer, which is probably not the most expensive version, but it seems to be a solid version in the test. The e-bike shifts through the gears cleanly, I have nothing to complain about here. 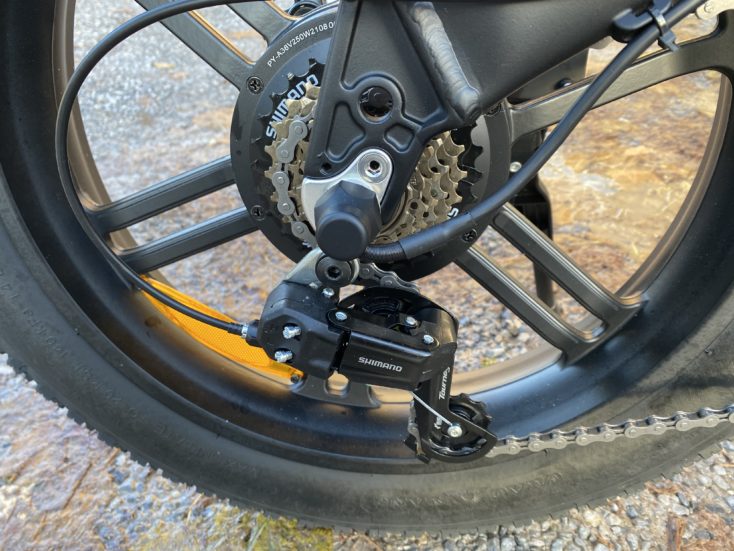 Due to the fact that this is a pedelec, I have further gears also not missed and the 7 gears are quite enough.

The 374 Wh battery pack sits in the frame and can be removed when the bike is folded. However, it is also possible to charge the battery directly in the bike. In the test, in the mountainous country, the battery was sufficient for about 30-60 km, depending on the support mode and distance.

It simply depends on where you are traveling with the pedelec. On vacation in the flat Netherlands, with a tailwind, the remaining range dwindles very slowly, while it goes much faster in mountainous regions. The charging time of the battery is a bit more than seven hours in the test, so it is recommended to charge the battery overnight.

The ADO A20F is a thoroughly off-road folding bike with its oversized tires. Thanks to the extra EU version with 250 watts of power and only a supporting motor up to 25 km/h, it can also be legally moved as a pedelec in Germany.

In itself, the ADO A20F makes a solid impression on me. It is overall well made, the frame is cleanly welded, the gears do a good job and the motor has enough power. Compared to other pedelecs I have ridden so far, however, the motor is a bit slower in response.

The solid impression is somewhat marred by the tools that you can throw in the trash after assembly at the latest and the accessories, such as the air pump and the cell phone holder, which have €1 store character.

The question remains, who exactly is the target group of the ADO A20F. Few people in Germany will need a folding bike with fat tires and solid off-road capability. At most, it makes sense in the countryside, for example, if you commute by train and the way to the station leads through a forest. Otherwise, I don’t see any reason not to simply use a “normal” folding e-bike or a real bicycle, especially since it is only conditionally easy to transport with its weight of 34 kg despite the folding function.