3 Kommentare June 22, 2019by Jens
Hey, guys! Just a heads up: The linked offer is already a bit older and the price of the gadget might have changed or it might not be available anymore.

The small drone AIR PIX wants to revolutionize the way we take pictures. The project is looking for supporters via Indiegogo. What is it about the small flying camera? 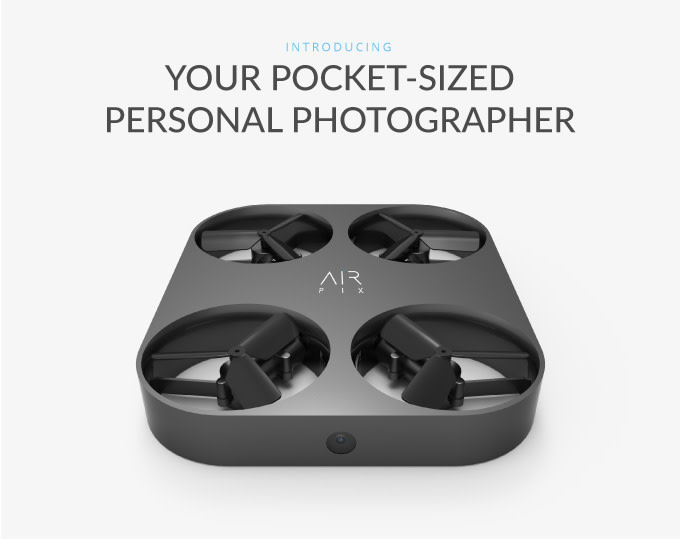 Small, lightweight, easy to use and a good camera – the AIR PIX is designed to combine all of this. At least the first two points can be confirmed. With just 102 x 85 x 13 mm it is smaller than a smartphone (good, a bit thicker) and with a weight of just 52 g it is also much lighter. The advertising trailer shows how you can imagine this: You just have the drone in your pocket and can take it out if you need it to take a quick snapshot.

In addition, operation should be child’s play. The drone should start with just one push of a button and take a photo independently. It is also equipped with face recognition and gesture control. Of course, it can also be operated via smartphone, which gives you even more control. The range is given as 30 meters, a realistic value for a WLAN connection in the open air.

And apropos smartphone: You should be able to easily share the photos you have taken via your favourite social media channels, directly from the AIR PIX app. The camera makes videos in Full HD / 1080p or photos with a resolution of 12 megapixels. And it is even advertised to be able to start a livestream directly with the camera of the drone. However, this must not take too long, as the flight time should be in the mid, single-digit minute range at most. Probably not without reason there is no information on battery size or flight duration on the campaign page.

That all sounds very good, and at least theoretically you can imagine doing a selfie with the small drone. However, the idea of a Selfie drone is no longer new. Even under the same brand, an almost identical drone called AIR SELFIE appeared two years ago. The AIR PIX is now much cheaper (99 USD) and much lighter. With the usual “Super Early Bird Discount” you can even support the Indiegogo campaign for 79 USD and secure a drone. The project seems to meet with enough approval, because the self-set financing target has already been exceeded by far.

But will the concept prevail? We really like the idea, but how well it will be implemented remains to be seen. What do you think of AIR PIX and would you try such a selfie drone?