0 Kommentare May 16, 2019by Tim
Hey, guys! Just a heads up: The linked offer is already a bit older and the price of the gadget might have changed or it might not be available anymore.

The Amarey A900 is an all-rounder for the household, which wants to score particularly with its 360° obstacle detection and a variety of features. Sounds pretty exciting at first, but the vacuum robot available since April 2019 also costs around $350. We’ve tested it and tell you if it’s worth the money. 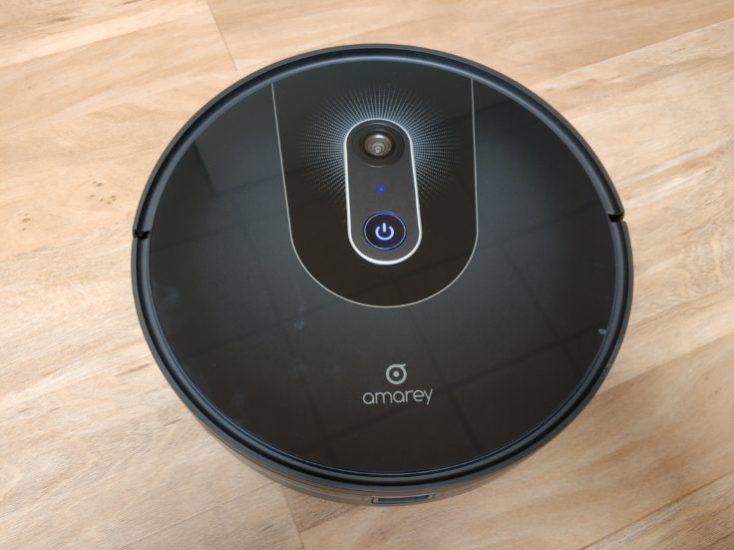 You are accustomed to other vacuum robot articles always having the comparison to one of the top models prepared directly in tabular form. However, the Amarey A900 is difficult to compare with the current top models, as it is in a league with the Roborock S50 in terms of price, but technically not as good as the vacuum robots in its price class.

Nevertheless it has to bear the comparison to the a little bit cheaper Mi Robot. Although you get the Amarey with fast Amazon shipping, warranty and CE mark, from my point of view this is not enough to justify such a price difference.

Whoa, after looking at the technical data sheets it looks a bit gloomy for the Amarey A900. Can it still shift up a gear in terms of navigation, operation and performance? Let’s first take a look at the scope of delivery.

The package is relatively small for a vacuum robot packaging in which the robot can be easily transported or given away. But then you open the box and are extremely annoyed: Although everything is finely packed, there is a fat plastic sticker on the vacuum robot itself, which you have to remove extremely carefully in order not to completely disfigure the look of the A900.

The scope of delivery includes the vacuum robot:

As with its predecessor, magnetic tapes can be laid to prevent the vacuum robot from crossing certain areas. According to the manufacturer, however, the system behind it has improved compared to its older brother, who already had it in the software package. It would be simpler to be able to draw prohibited areas into the map, as with the RoboRock S50 or 360 S6.

When it comes to design and workmanship, there’s not much to complain about, but nothing to emphasise either. With a height of 7.5 cm, the robot is quite flat compared to the models with laser distance sensors (~10 cm). Thus it fits under most pieces of furniture (sofa, chest of drawers, etc.), but it makes sense to measure it before buying. The weight of 2.58 kg is also a normal value and feasible if you want to lift the vacuum robot.

All individual parts are cleanly processed, but the robot generally looks rather cheap. This is due to the plastic used, so we are used to better quality from other manufacturers. The on-off button is located on the underside, which makes switching on a bit annoying. So you have to lift the Amarey to switch it on.

Positive on the underside: In addition to the two brush heads with which the robot pushes the dirt into the intake hood, there is also a middle brush above the intake hood. Compared to the Narwal vacuum robot, this is the only advantage of the Amarey A900: instead of a direct suction system, the central brush on the underside of the hood improves the floor quality. In addition, coarser dirt is filtered again before it reaches the HEPA filter and then the dust chamber.

To be honest, I am slowly losing interest in including charging stations in the evaluation of a vacuum robot. Here we have the usual cheap plastic construction, from where the vacuum robot starts its work and returns there when the battery charge level drops to recharge the battery. This happens after a working time of 100 minutes. After a charging time of 4-5 hours it is ready for use again.

To download firmware updates, the A900 must also be on the charging station so that it does not lose too much battery power during the download.

Features of the Amarey A900: An all-rounder for the four walls?

The predecessor model A800 enjoyed great popularity with various YouTubers and bloggers, only among the users the Chinese manufacturer Amarey is still a blank page. That’s about to change with the new model, which is why the A900 offers a multitude of features:

Now we know the functions, but they still have to prove themselves in practice. Let’s start with the analysis of the camera navigation.

As you could read recently in our guide to the navigation methods of vacuum robots, camera navigation is not the latest way of orientation. Not the best either. With its camera, the Amarey A900 scans the ceiling of the apartment. The ceiling is then converted into floor plan and route. Since the vacuum robot assumes that the ceiling has the same floor plan as the floor area (which is usually the case), it orients itself on this. The camera does not take optical pictures, do not worry.

The Amarey A900 runs the apartment in straight, targeted lanes. The 360° obstacle detection ensures that the robot gets through complicated areas (such as under tables with chairs) particularly well without hitting obstacles. This detection means that the vacuum robot does not run the risk of falling down stairs or anywhere else.

In addition to the usual vacuum robot features (finds charging station automatically and recharges battery, working times can be scheduled etc.), the A900 creates a map of the four walls with its built-in SLAM algorithm (Simultaneous Localization and Mapping) and displays it in the app. More about this now.

The app “Amarey”: Registration and connection to WLAN

After downloading the app (Android, iOS) you have to register as usual by mail, whereupon you will receive a confirmation code to this mail address. So you can use a disposable mail address (which most people should have), but not a complete fake mail. After this step you have to assign a password. For the registration a mail address has to be entered again.

It is nice that the app is also available in German, as in our example pictures. Not so nice is the implementation of the use of the German language. You can see it on the screenshots below. The English translation is not too bad.

As always, the note at this point that vacuum robots can only be connected to 2.4 GHz networks. Most WLAN modems today support 2.4 AND 5.0 GHz. If this is not the case, simply start a search query at the search engine of your choice. In the next connection step, the device must be added to the WLAN and in the app. Of course, the smartphone and the Amarey A900 must be in the same WLAN to be paired.

Because many people make the same mistakes all the time: If something doesn’t work with the connection right away, it can also be because you simply entered the wrong WLAN password. With the Amarey A900, integration into the WLAN is very simple and really fast.

Functions of the Amarey A900 within the App

The functionality within the app is manageable, especially when compared to the Xiaomi Home App or Ecovacs Home App. All functions are very easy to find, the remote control of the robot is obvious.

The functions are listed briefly for the sake of clarity:

Especially interesting here is the mapping, which you wouldn’t want to miss since models like the Xiaomi Mi Robot or Deebot Ozmo 930. But how well does creating a virtual map with camera navigation work? Isn’t that just something for laser room surveying?

Mapping and obstacle detection of the Amarey A900

The map I created (see screenshot) strongly reminds me of a retro console game. In fact, the mapping works pretty well! As soon as the vacuum robot hits an obstacle with its bumper, it recognizes this as an outer wall and draws it in accordingly. Live, of course.

In fact, you can’t do anything else with the mapping, you can’t draw in virtual walls or no-go zones. So you do get a floor plan of your premises – which is cool – but you don’t get anything out of it. The only conceivable purpose is that you want to understand what your robot is doing while on the move. But otherwise … hmm.

But the obstacle detection is to be emphasized positively, even if with small compromises. The vacuum robot detects every obstacle, but always docks it lightly with its bumper. That’s probably what’s wanted. Accordingly, extremely sensitive objects or furniture must be removed before cleaning. But nothing can happen to the robot with its front bumper. It also only slightly moves against it.

Most vacuum robot manufacturers, who include a remote control in their scope of supply, have probably oriented their design to the 90s. Amarey also seems to have looked around for TV remote controls from another century. At a distance of 7 m, the robot can be operated from above.

Since the functions will probably not be familiar to everyone, I have labeled a picture of the remote control:

If you don’t want Amarey to collect app data from its owner, you can only control the robot by remote control. Scheduling working hours and mapping is then no longer necessary. I always think it’s good to have a remote control included for these reasons.

Voice control of the Amarey A900 via Alexa and Google Home

Also owners of Amazons Alexa can be happy, because the round helper can be commanded with it. Up to now, however, the functional diversity of the Alexa control system has always been very limited in robots and hardly went beyond starting and stopping the cleaning process. If something will happen in the future, the Amarey will certainly also benefit from this.

To use Amazon’s Alexa and Google Home you need the Tuya Smart App (Android, iOS). Possible commands can be starting, stopping or scheduling working hours. The range of functions is still somewhat limited here, which can change naturally still in the course of the time.

“Life can be so easy with Amarey”. So it says on the packaging, but it becomes easier with other manufacturers. Especially in the price range over $300, models like the 360 S6 or the RoboRock S50 simply play a too dominant role. As an entry-level model you could really use the Amarey A900 – if it weren’t for the price.

The A900 reminds me rather of an ILIFE or a Haier XShuai, which mostly charter under $200. At this price the Amarey would also be absolutely okay, there is not much to criticize about the vacuum robot. Apart from the fact that in its price class there are strong models on the road that offer much more for $350.