0 Kommentare September 21, 2021by Tim
Hey, guys! Just a heads up: The linked offer is already a bit older and the price of the gadget might have changed or it might not be available anymore.

Heart rate sensor in the ear? That must be the new Amazfit PowerBuds Pro with ANC, numerous fitness functions and IP55 water resistance. The perfect partner for sports enthusiasts, we tried out the new headphones. 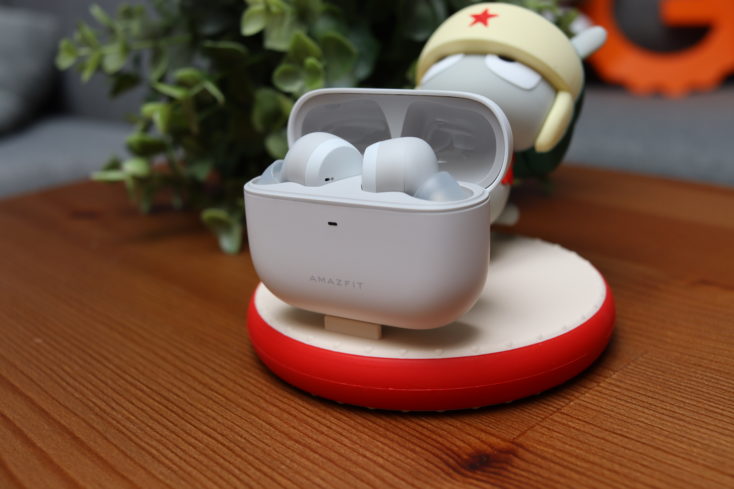 The Amazfit PowerBuds Pro come in a rather small but chic box, whose surface feels very special. Inside the box, you will find the headphones themselves, ear pads in a total of four different sizes, a USB-C charging cable, and a user manual. 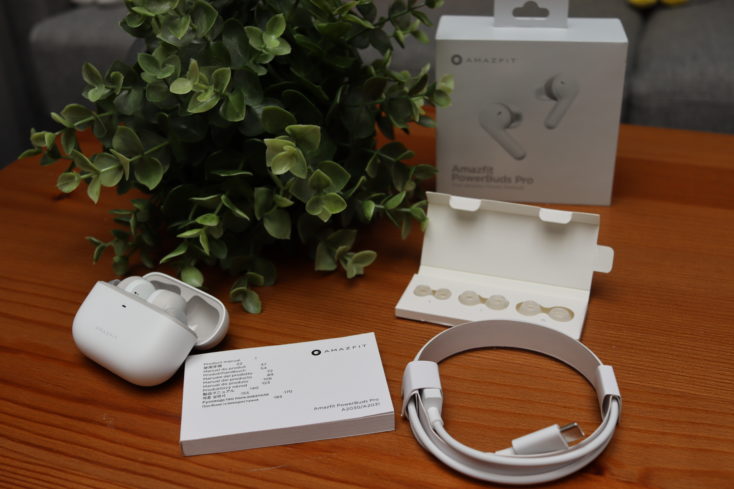 I like the design very much, you definitely have the feeling that you are holding a high-quality product in your hands, but if you look at the price tag, you also know why that is.

The Amazfit PowerBuds Pro with stick design are remotely reminiscent of the Apple AirPods Pro. Size and stick length are roughly identical here. Color-wise, the earpieces are white at first glance, but at second glance it’s more of an eggshell color on the outside, so a bit darker. The inside, on the other hand, is even darker and in a kind of champagne shade, which I like. 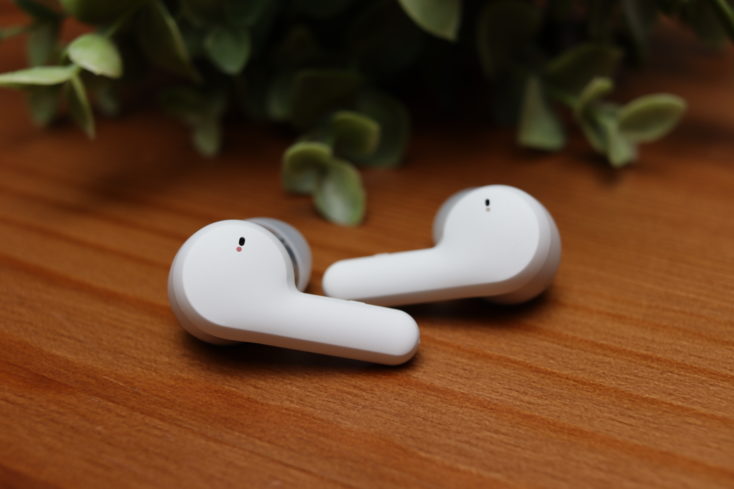 With a weight of 6.7 g per earpiece, they are slightly above average, but I do not feel that this has a negative impact on the wearing comfort. The charging cradle, on the other hand, has a normal weight of 42 grams.

The somewhat elongated shape of the charging cradle also reminds me of the Apple AirPods Pro. However, in order to create a slightly different look, we decided to position the earpieces with the ear pad on the outside instead of on the inside. Thus, you have to turn the earpieces 180° between removing them from the charging cradle and inserting them into the ear, which is a bit awkward in my opinion. 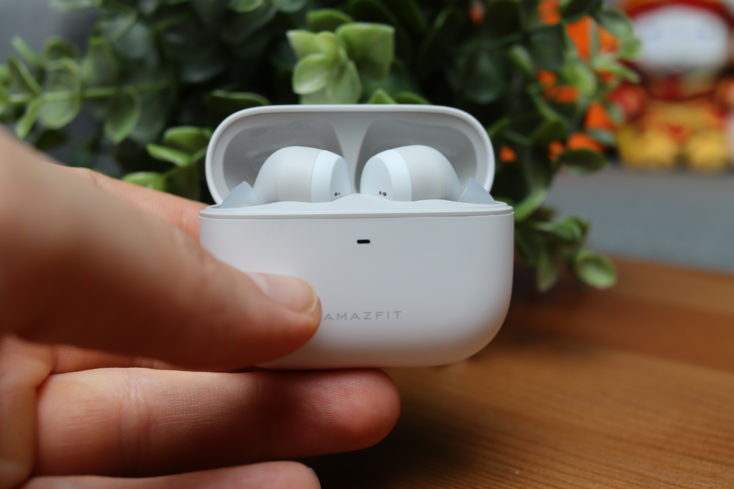 The headphones make a very high-quality impression, as already described in relation to the packaging. The plastic used simply feels better than in a 30-50€ headphone. I also like the use of different colors for the outside and inside of the earpiece and the charging box.

In terms of workmanship, I could not find any flaws or other defects. The Amazfit PowerBuds Pro are glued cleanly and there are no gaps – very good!

Sound of the Amazfit PowerBuds Pro

The Amazfit PowerBuds Pro are equipped with a dynamic driver, whose diameter the manufacturer unfortunately keeps to itself.

With the first few hours of trial listening, I like the sound of the headphones. The in-ear has a quite detailed high frequency, nicely tuned midrange and solid bass for the fact that only one dynamic single driver is installed.

Unfortunately, it can’t quite keep up with the Soundcore Liberty Air 2 Pro in the sub-bass department, but here again it’s a matter of taste whether you prefer bass-heavy sound or rather a moderate low-end.

On our trip to Berlin for the Xiaomi 11T Pro launch event, I already had the opportunity to try out the ANC of the Amazfit PowerBuds Pro headphones on the train.

The Amazfit PowerBuds Pro are equipped with a total of six microphones, also thanks to ANC. Which work with an AI-controlled background noise suppression during phone calls.

In the test – also on the train – my conversation partners could understand me well. The in-ear headphones reliably reduce or cancel the noise of the train while you do not speak, but the other person does. 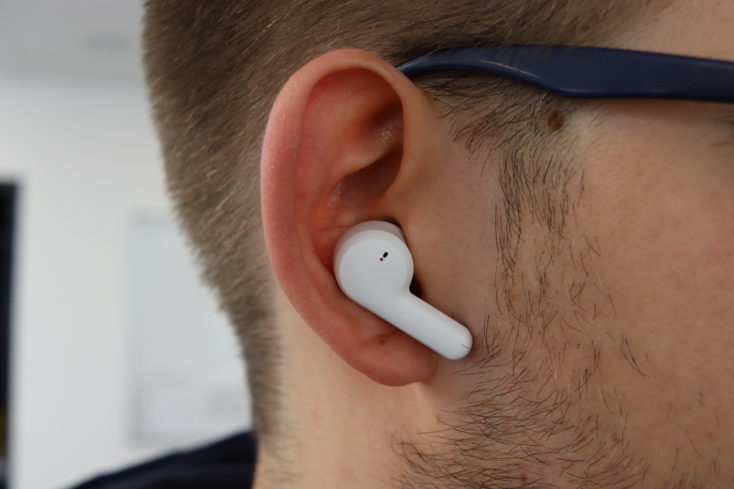 The user’s voice is clearly audible to the other person, but background noise is muffled depending on the volume. Thus, the Amazfit PowerBuds Pro are quite suitable for making calls, but there are also cheaper headphones with a better headset like the Huawei Freebuds 4i or the Soundcore Life P3.

The Amazfit PowerBuds Pro are equipped with touch sensors. These are not located on the back of the earpiece, but in the bars – like Apple’s AirPods Pro. Thus, the stick has to be pressed together slightly with two fingers to trigger a function.

In total, there are three four to choose from:

The “long press” function cannot be customized; it can always be used to switch between ANC, transparent and off mode.

The remaining gestures can be customized in the ZEPP app. Play/Pause, next/previous track and voice assistant are available. The option to adjust the volume via headphones is unfortunately not available, until now. Hopefully, Amazfit will add this feature via an update.

In addition to the active control options, there are also proximity sensors in the Amazfit PowerBuds Pro. With these, the music is automatically paused or resumed when you take the earpiece out of your ear or put it back in.

Some of you probably already know the ZEPP app from various Amazfit smartwatches. After the Amazfit PowerBuds, Amazfit has now also implemented the Pro version. Compared to the Soundcore app, the Zepp app for the Amazfit PowerBuds Pro seems a bit overloaded, but it also offers more functions and information.

Whether these are useful in everyday use remains to be seen. Compared to other apps, the translation is not flawless, which should not be the case considering the price of the headphones.

Overall, however, a mobile app is always an advantage. This way, the manufacturer has the opportunity to continue to improve the headphones and provide them with updates even after they have been sold to the end customer.

Compared to other headphones, the Amazfit PowerBuds Pro offer several sensors at once for recording speed, heart rate and altitude meters. Since the sports part is still untested, we will follow up here with how trustworthy the results and metrics of the headphones actually are.

The headphones are equipped with a Bluetooth 5.2 module. In testing, I was able to achieve a range of just under 20 meters in open spaces and a correspondingly good connection indoors.

However, it remains to be seen how stable the connection is in practice during jogging, for example. We will of course test this in the review. However, I am very confident in the first impression that the connection remains stable even during sports.

It is a pity that Amazfit only uses the SBC and AAC codec. Experience shows that higher-resolution codecs, such as the aptX codec, are often accompanied by an even better connection stability.

In terms of sound, ANC and Bluetooth range, they are already convincing. However, I personally think the ZEPP app is a bit too overloaded and the partly unclean translation should not be the case for a 130€ headphone.

I am curious how well the headphones perform in the sports disciplines and can really offer added value here. If it can really replace a fitness tracker, it could actually score with arguments that are not found in the competition.