0 Kommentare February 18, 2022by Jens
Hey, guys! Just a heads up: The linked offer is already a bit older and the price of the gadget might have changed or it might not be available anymore.

The latest Anbernic console RG552 can be ordered since the beginning of December 2021. It is bigger and more powerful than previous models and relies on an Android operating system for the first time. In return, the price is significantly higher than that of past models like the RG351P. We got ourselves a model and tried it out. You can read what we think of the RG552 here. 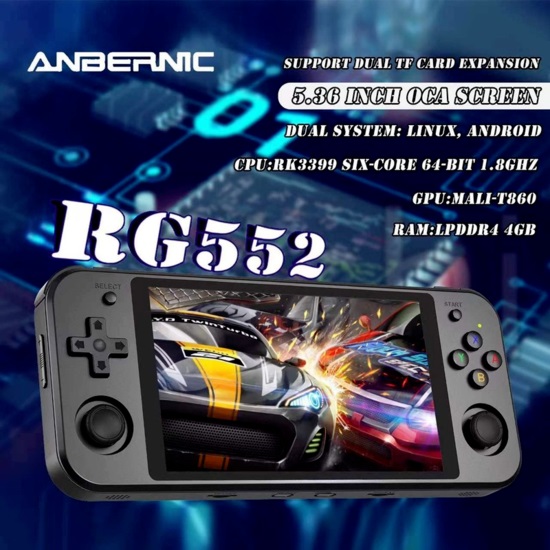 Anbernic hasn’t just been making consoles since yesterday, so everything should actually be perfect here. Well, I would have a few small suggestions for improvement, but one thing at a time. First of all, the RG552 is very well manufactured. The console feels high-quality and only has very small gaps. The keys are well-made and have very pleasant pressure points for my taste – with the exception of the shoulder keys, which I will get to later. 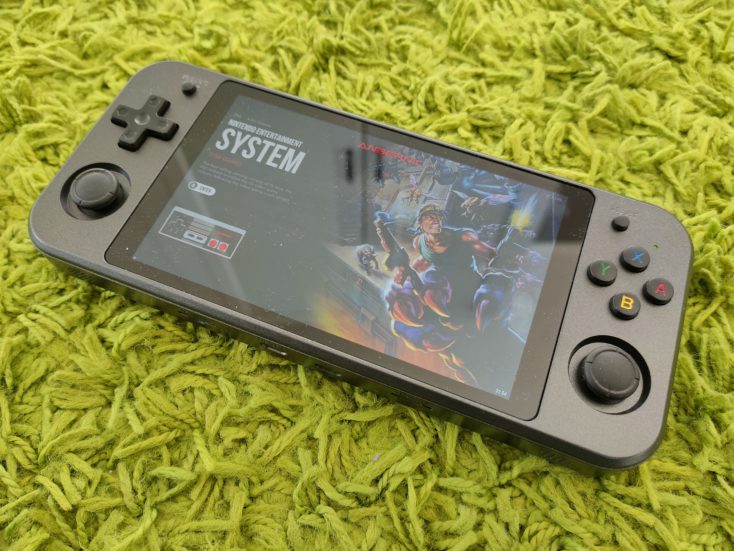 We have everything the heart desires in terms of ports. Charging is done via USB-C and there is even a second USB-C port for data transfer. There is a headphone jack and even a mini-HDMI output that allows connecting the console to the TV. Two micro-SD card slots allow for memory expansion, but the console is also shipped with two cards. 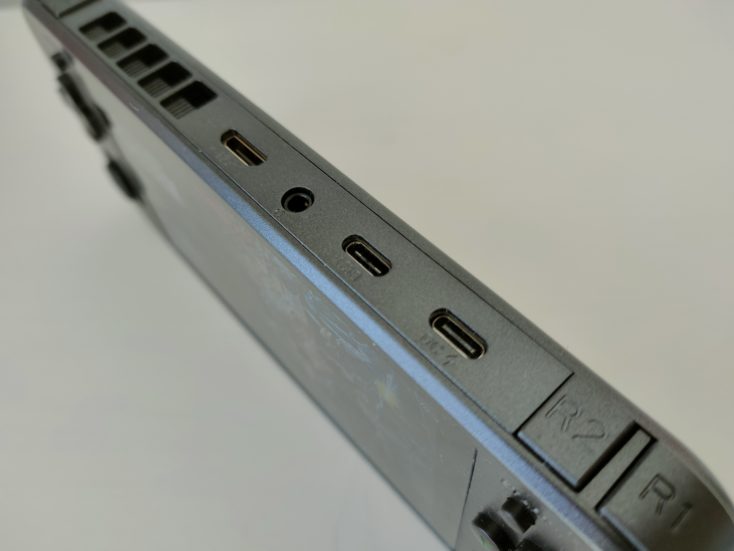 Position of the keys – not always optimal

There are two analog sticks and two shoulder buttons per side. Unfortunately, these do not get along optimally with each other. If you hold the console so that your thumbs are perfectly positioned on the sticks, it is very difficult to reach the inner shoulder keys (L2 and R2) with your index finger. This is almost only possible if you move your hands around the console a bit and reach the sticks with your thumbs from the side. But then you hold the console in a “claw” that is unpleasant for the hands in the long run.

If you have very large hands, you might have fewer problems, but the arrangement is not optimal for averagely long fingers. Fortunately, this is not too bad, since most older games do not require two shoulder buttons. 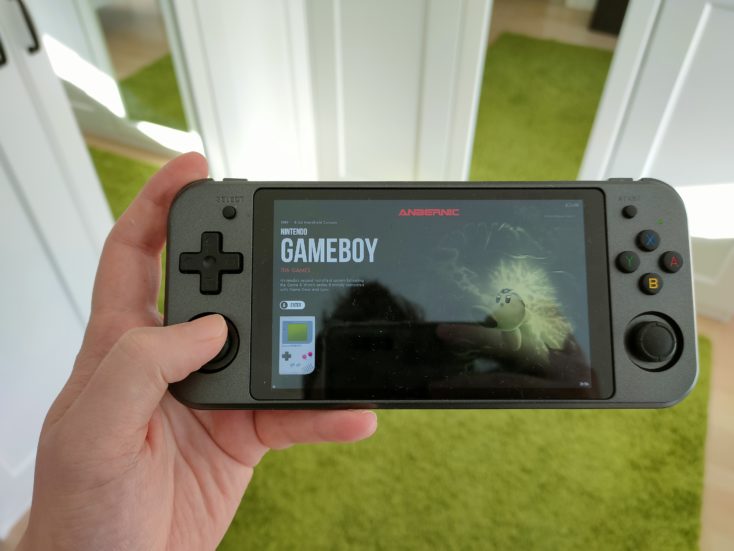 The sticks themselves are also a bit short, but this can only be blamed to a limited extent. They probably wanted to keep the console as “flat” as possible and have already let the sticks into the case a bit. Thus, they do not protrude further than the other keys. That’s just a compromise that has to be made. The sticks are basically precise, though, and I don’t really have anything to criticize about the controls. 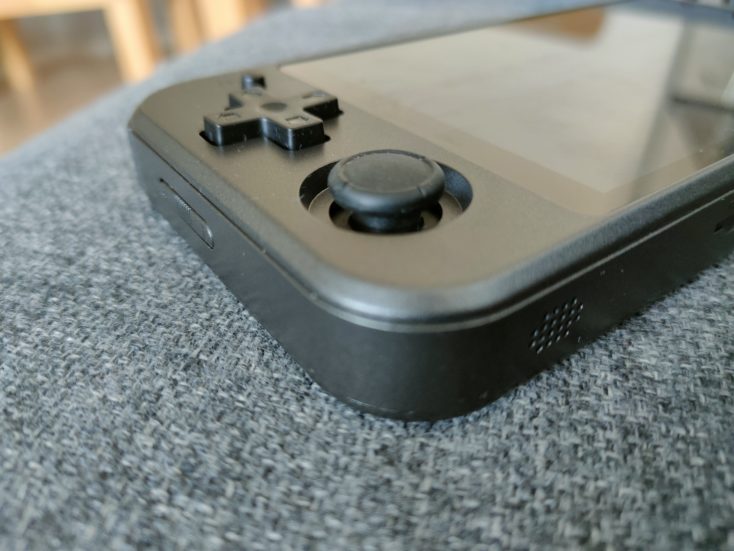 Another button that is not optimally placed in my opinion is the power button, which turns the console on or turns the display off when the button is pressed briefly (on Android) (just like on a smartphone). This button is located on the right side, and it happened to me a few times while playing that I pressed it by mistake. This happens easily, especially when you reach around with your hands or put the console down or pick it up. Not really a big problem, but I would have liked the button better on the upper side.

The display has grown considerably compared to the previous models, the RG351 devices. It is almost 2 inches larger and now measures 5.36 inches with a resolution of 1920 x 1152 pixels, slightly more than Full HD. This now looks like a mid-range smartphone and makes games look really good. The colors are great, the brightness is also very good. It only reflects very strongly in a lot of light.

It is also a touch display with 10-point multi-touch. Thus, all games could also be played with on-screen keys, among other things, but that does not make much sense. However, I almost exclusively use the touch display in the menu and the keys almost not at all. Apart from the “main menu” with its tile view, the entire Android is also designed for this operation. This is different under Linux, where I do not use the touch display at all.

More performance – at least on paper

Due to the somewhat stronger processor – compared to the previous models – N64 and PSP games should now be played even more reliably. Additionally, there is 4 GB of RAM, also a significant difference. In fact, I didn’t notice any or hardly any performance problems with the N64 titles I tried out. On the PSP or DS, things look different, the games are all playable, but sometimes struggle with reduced framerate.

I still have a special relationship with the N64 as my first own console from 1997 and am happy to be able to play the games here in really good quality on a handheld.

According to the description, NGC and Wii games are also playable; a corresponding emulator (Dolphin) is also preinstalled. But here I have to say clearly: This is wishful thinking. Windwaker does run, but it struggles with severe stuttering and sound problems and is actually unplayable. With F-Zero GX (which, by the way, has received far too little attention and is, in my opinion, one of the best racing games of all time), the game already craps out in the menu. With Gamecube and Wii, unfortunately, you can’t do that anymore.

Everything below that that doesn’t rely on 3D is playable without any problems. Again, I could of course only test a selection of games, but never had any problems. Playing 8- and 16-bit games smoothly is no longer an art nowadays and should be a matter of course.

There are two batteries with 3,200 mAh each, which are supposed to provide up to 6 hours of runtime. As always, this depends on the usage, but I am satisfied with the runtime. The battery can also be charged quickly with up to 30W. There is also 64 GB of internal storage as well as the option to expand it via SD cards, of course. 2.4 GHz wifi is supported, but there is no Bluetooth.

Android 7.1 is installed on the eMMC storage. So far, there have always been Linux-based systems. However, that is not ruled out here either, because we speak of a “dual” operating system: Linux can also run on the device via the memory cards.

Android, albeit in an outdated version, offers all the advantages that are also known from smartphones. In fact, it can be used almost exactly the same way. Additional emulators can be downloaded from the Playstore, Chrome is a browser, and games designed for smartphones can be downloaded easily.

The emulation is sometimes a bit cumbersome, you have to reorient yourself with every emulator. The Linux-based Batocera is clearer. Linux boots automatically when the second SD card is in the left slot. If you leave the card out (or just swap the slots), Android starts. You also have direct access to thousands of games on the second SD card. The emulation is almost the same, but the games occasionally perform better under Android. Gamecube and Wii are completely missing under Linux, but as mentioned, they are also unusable under Android.

The official Anbernic store on AliExpress offers the console in a hundred different packages. They mainly differ in the included adapter. You should therefore look out for the corresponding EU plug when buying. Some packages also include a case for the console, and the console is also available in two different colors. You can also choose whether an SD card with games is included. Strictly speaking, you can do without it if you have your own ROMs or know how to get them.

Evaluation of the Anbernic RG552

Personally, I’m a bit torn. On the one hand, I like this kind of “retro” consoles very much (own one from Anbernic myself). The fact that more games are now supported due to more power is nice if you don’t only want to play SNES titles. And especially the very good display with over 5 inches is a welcome improvement, even if it’s mainly due to the size and not the resolution, which most titles don’t benefit from that much. There’s also finally the HDMI output, which was missing from the last generation of consoles.

However, the whole thing also comes at a not insignificant price. For not that much more money, you also get a Nintendo Switch, which you inevitably have to think of with the now even bigger case of the console. Sure, it doesn’t appeal to the same target groups and the games are different, but you have to realize the price range we have reached by now. For 2D titles of the 80s and early 90s, a console for under 50€ is enough. I don’t really see the two operating systems as an advantage, since you’ll probably only use one of them in the end anyway.

The Anbernic RG552 is a “good” handheld console that can play games up to the N64 generation well. However, it takes on a bit much, fails with newer titles (GC, Wii) and might also be a bit too expensive for most.