2 Kommentare May 14, 2019by Kristian
Hey, guys! Just a heads up: The linked offer is already a bit older and the price of the gadget might have changed or it might not be available anymore. 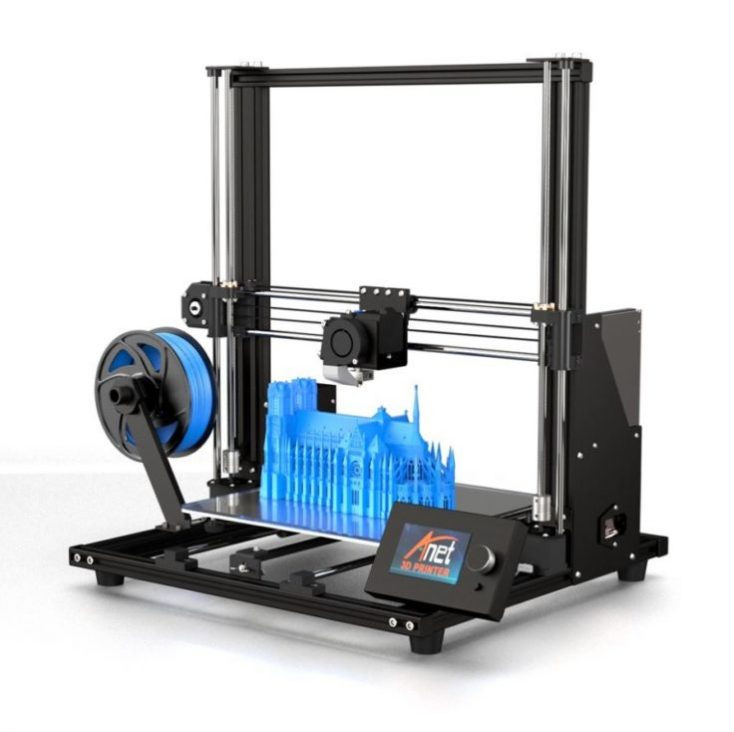 On the paper there are some big upgrades and the screws were screwed where the predecessor often had something to complain about. The acrylic frame has been abandoned for some time and aluminium profiles are used ( since the Anet E10). The Direct Drive extruder is probably a small unique selling point – it is rather rare in China 3D printers.

Scope of delivery and packaging

The Anet A8 Plus is available in two versions: A complete DIY version and a version where some parts are already pre-assembled. We received the partly pre-assembled version, where the heating bed is already attached to the frame and the axles are assembled. Inside the packaging, the individual parts are protected by polystyrene / foam, but here we tried to accommodate a lot in the smallest space – a pity – we know better. With the Creality3D CR-10S Pro each part had its own place and was not placed together with other assembly parts.

Already during the removal of the individual parts the disillusionment came: Individual screws were loosened and lay between the “thrown together” individual parts or stuck in the Styrofoam. So the first task was to locate the screws and put them back in place. It is best to check again if the remaining screws are tight. With our 3D printer, we unfortunately had to retighten the screws in many places.

Getting everything together was a relatively frustrating job and I can imagine: With bad luck you can’t find all the screws and if you don’t have a well-assorted screw box with spare screws … you have a problem.

Two bolts were missing from the nut of a threaded spindle. They could be found, but when I tried to fasten the screws, I noticed (after a process of exclusion) that one of the two screws was shorter than the other. At this point it’s not really tragic, but it doesn’t exactly speak for Anet.

And when you’re about to retighten all the screws, of course you take a closer look at the 3D printer. So various covers (yes, I know, “beauty stuff”) were not printed cleanly and/or even damaged.

Included are the “classics” – these are:

The Anet A8 Plus 3D printer arrived partly pre-assembled, saving some work. Only smaller parts, like the X-, Y- and Z-axis limit switches and the electronics including the LCD monitor, had to be mounted. In addition, the complete electronics had to be wired together. Sounds simple, but is very time-consuming – especially if you want to make it nice.

The assembly and operating instructions are available as a PDF file on the enclosed Micro SD card. This was not really easy to read and so I had to switch to the Youtube tutorial from the manufacturer. If you perform all assembly steps exactly as in the video, nothing should go wrong. However, the lady in the video is a bit quick to assemble. Therefore it is worthwhile to press the pause button briefly after each step so that you don’t make any mistakes.

What else had to be done during setup?

It doesn’t sound like much, but for a beginner the wiring of the whole electronics will take a lot of time. Unfortunately the whole thing ends in a tangle of cables, which was better solved by the competition, e.g. Creality3D with their CR-10S Pro. There a flat ribbon cable is used, which prevents a lot of cable clutter. After all, the Anet A8 Plus comes with cable ties and a winding tube, with which you can create some order – but getting the cables properly into the winding tube is very time-consuming.

The mainboard of the Anet A8 Plus is an Anet3D V1.7 board that offers overvoltage and short-circuit protection this time.

The LCD screen is attached to the holder by magnets and is removable, so to speak – no idea what this is good for. I would rather prefer a firmly screwed on display. Why? Because despite the magnets, the display still has plenty of room to move. It wobbles, sits crooked with time and vibrates during printing. Annoying. 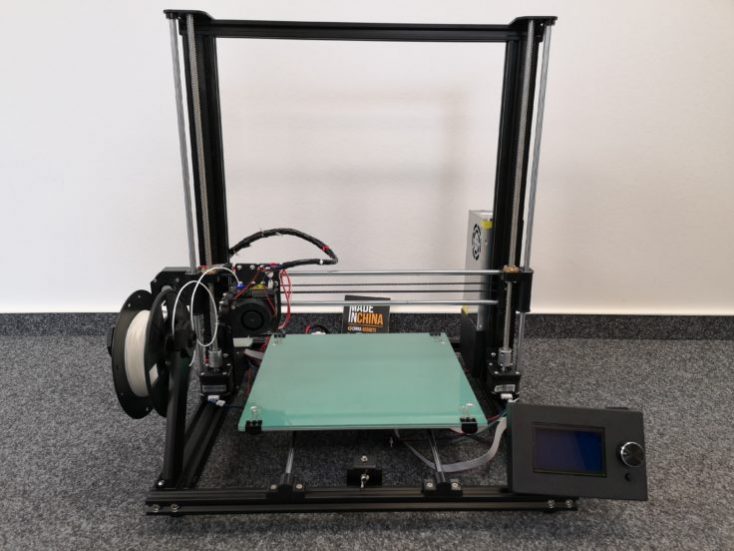 After about an hour all cables were where they belong and the rest was screwed on. Now the Anet A8 Plus is ready for commissioning.

Anet A8 Plus: The first print

After the start, a short loading screen appears and then the display lists current information about the hot end and heating bed in English. As with many other 3D printers, the control console is operated via a rotary wheel on the LCD display. After pressing the button, you land in the main menu.

Before printing, the first preparations are made under the menu item “Prepare“:

The heating bed must be levelled in order to avoid problems with material that does not adhere to the heating bed during printing. Position the nozzle at each corner of the heating bed and lower or raise the heating bed using the leveling wheels at the bottom. These are quite small on the Anet A8 Plus – they could have learned more about them in all these years ;-).

The nozzle is preheated and the filament is introduced into the feeder through the opening above the extruder. The 3D printer has an automated filament feed, which is a nice extra. But here comes the next problem with the Anet A8 Plus.

In order for the mechanism to work, the filament must first be inserted into the opening of the feeder. And this is exactly where the problem lies. After you bring the filament through the first opening, you have to hit the opening underneath. I have used several attempts to hit the opening. You can’t see exactly where it is. The whole thing develops into a trial-and-error marathon. Fortunately, as soon as the filament is in the right place, it moves on fast. The mechanism takes hold and the first filament is already extruded beautifully smooth.

Printing process of the Anet A8 Plus

The Anet A8 Plus prints via a micro SD card. There are already some test files on the enclosed micro SD card that are just waiting to be printed. The card is connected to the motherboard via the appropriate connector. Here one or the other could get excited about the processing of the case from the motherboard. The milling on the case is slightly larger than the micro SD slot itself. This may cause the memory card to slip out of the hand into the case. Annoying, because you have to unscrew the case again to fish out the lost micro SD card.

Quality of the printing units

The cube was printed with a layer height of 0.2 mm. You can see exactly that the printer had problems with some layers. The dimensions of the cube also clearly show that some fine-tuning is needed. Otherwise, the print image is solid. 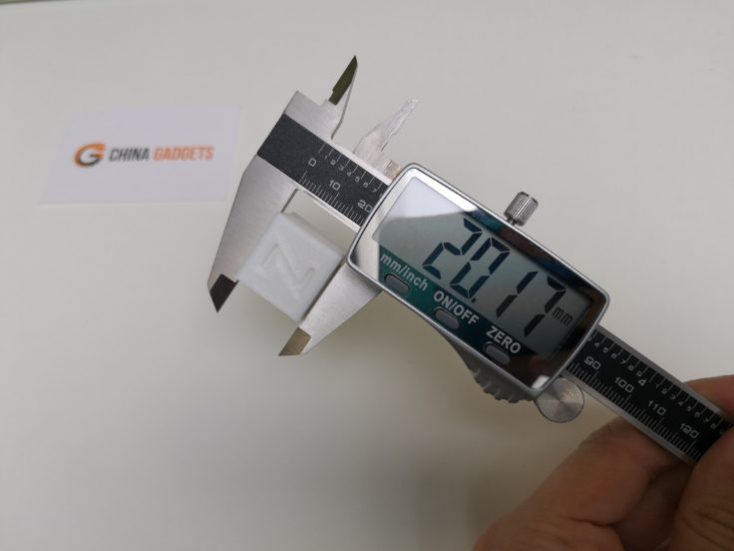 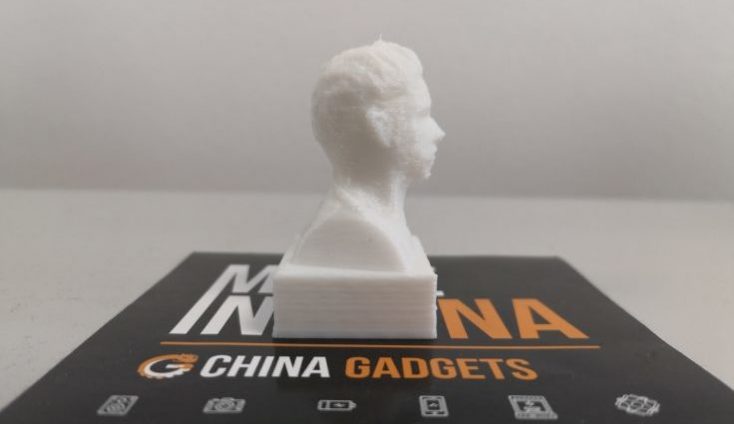 The result clearly shows the problem areas. Although the majority of the bust was printed well, the details clearly show that the 3D printer had difficulties. Especially with larger prints, the print image definitely suffers from all the jarring of the printer.

Of course you can tweak a lot here … but why? For the money there are simply better 3D printers.

The Anet A8 Plus definitely can’t build on the success of its older brothers. The attempt to eradicate old weaknesses and “inspire” the competition was not successful. Instead of following in the footsteps of the competition, they rely on components of inferior quality. The Anet A8 Plus is a 3D printer that is simply not up to date. Due to the pre-programmed cable clutter, the construction is particularly nerve-racking for beginners.

Despite the aluminium frame, it also feels very rickety, which is also noticeable during printing – and the print image also suffers as a result. In my opinion, the wrong corners and ends were saved here and instead extras were used that are nice, but not necessary (see detachable LCD screen).

The Anet A8 Plus is definitely not worth its price and there are much cheaper 3D printer alternatives with the Geeetech A10 or the Creality Ender 3. Although they have a smaller printing area, they are still better suited for getting started. Or you put something on it and get the Creality CR-10S Pro. Yes, it’s more expensive, but you save the whole cable tangle, as the printer arrives almost completely assembled and has a high-quality 3D printer, which, out-of-the-box, delivers excellent print quality and offers great extras.

It’s funny how a good brand with a head start can ruin it … What a shame!