0 Kommentare September 15, 2018by Kristian
Hey, guys! Just a heads up: The linked offer is already a bit older and the price of the gadget might have changed or it might not be available anymore.

“Who is copying whom?”, was my initial thought. The very successful Anet A8 and Anet A6 (my low-budget recommendation) lost ground against the Creality CR-10. There were several reasons for that: the bowden-extruder enables faster printing and a very solid aluminium-frame and the bigger printing area are some other of the top 10 reasons.

Anet anthicipates a comeback with its newest model, the Anet E10. Therefore they use a similar construction as the CR-10 and feature some improvements, but they also make some unnecessary mistakes. This is our Anet E10 review: from frustration to positive surprises. 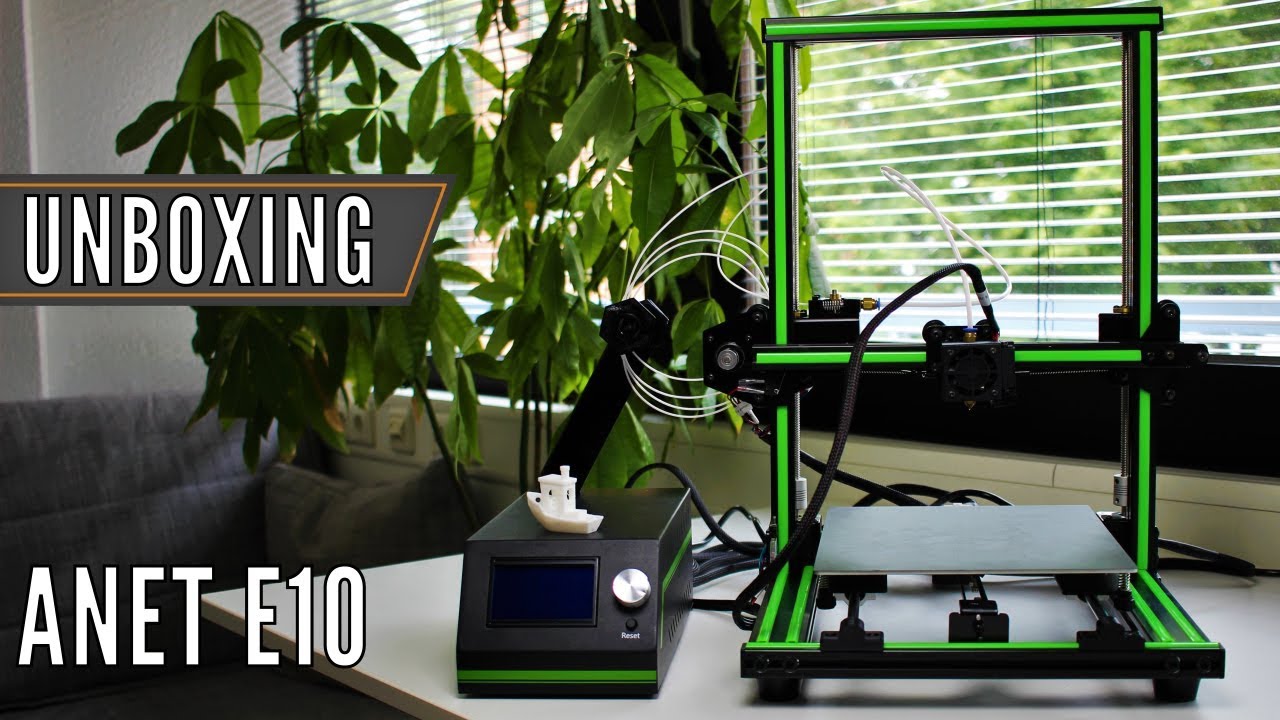 It is nice to see that the Anet E10 was well packed, like nearly all 3D-printers from China. A sturdy carton and well-fitted foamy material protect the 3D-printer against bumps and collisions. Because the E10 consists of an aluminium-frame, there won’t be any acrylic component that is endangered to crack. Unfortunately there were some loose screws in the carton, that fell out when I openend the package. At first I couldn’t assign them to where they belong.

After I did some research it was obvious that the heatbead is not preassembled which causes the problem of the loose screws. Few people complained that this circumstance resulted in a broken heatbed. Wether the preassembled screws are too loose or way to hard (more on this later). On the other hand the company took the trouble to secure the whole printhead onto the x-axis and the hotbed onto the y-axis for the transport. That definitely is a positive aspect. 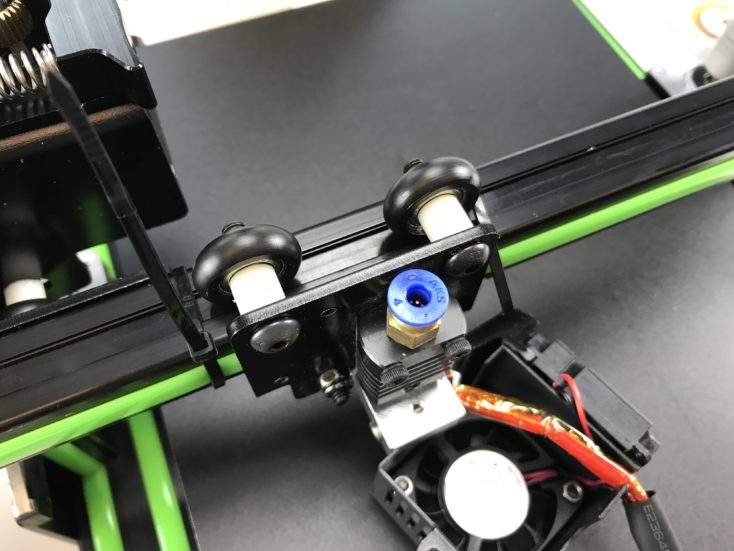 While it was not clear during the release, how much the consumer has to assemble on its own, it is now known that the Anet E10 comes in two big, preassembled parts (base and construction). The third part is the external power supply (+ board), which comes in a metal case. The cables just have to be plugged in during the last steps of the construction. 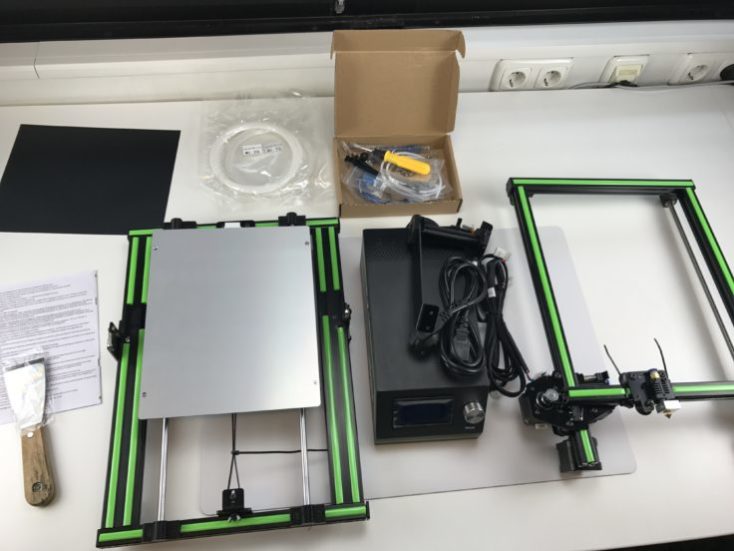 Similar to the Anet A8 and Anet A6 Anet provides a 8 GB microSD-card which can be used for your first prints or to have a look at the setup manual. We have uploaded the most important files for you, after running a virus scan. So you can get a little preview or use it after you have already ordered your example.

Furthermore there is Cura (version 14.07) – but we recommend you to download the recent version 2.6+ at Ultimaker.com. This comes along with the Cura settings that we have embedded on this page for you. Who has not worked with Cura yet: it is a solid foundation – but I used my CR-10 configuration to start off.

In addition to that we have some USB-drivers, some STLs and GCODE-files (unfortunately no benchy or calibration cube including the correct slicer settings). So far, so good. Now the construction can begin!

My expectations were high, because the Anet E10 is my 7th (or 8th ?!) 3D-printer from China. Instead of assembling everything for four to six hours (Anet A8), the E10 can be just tucked together because of all the preassembled parts. Is it possible that one just needs about 30 minutes for the complete setup?

Long story short: no! Despite the good and short English manual, there are some unnecessary flaws that slow down the whole process. But let’s take one thing at a time.

The attached manual (8 steps) is completely sufficient. You don’t need an extra tutorial that you watch on YouTube while assembling everything. Still, as a matter of fact the CR-10 just needed four steps to be finished. The actual problem with the E10 is the following:

For example, the two steppers are, although they are better than the one on the CR-10, assembled the wrong way. This means that the power connection would be stuck at the two hotbed-screws. However, the frame for the steppers is preassembled very tight, which causes that you can’t unscrew it with the Allen key, that comes with the printer. 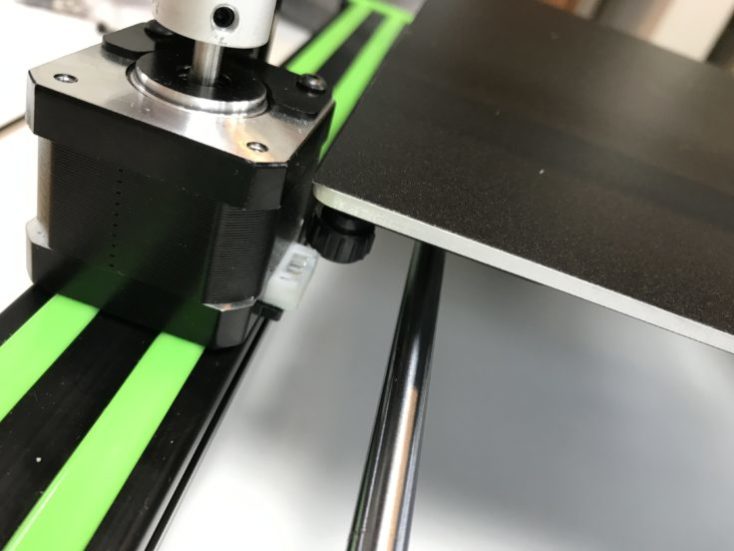 Of course we have other and better tools at hand (the solution was a good Allen Key + wrench), but this means that Anet doesn’t provide everything that you need. By the way, why did they connect the steppers with the couplers and the thread? The leverage is pretty high and one would be able to do the same construction in about one minute. 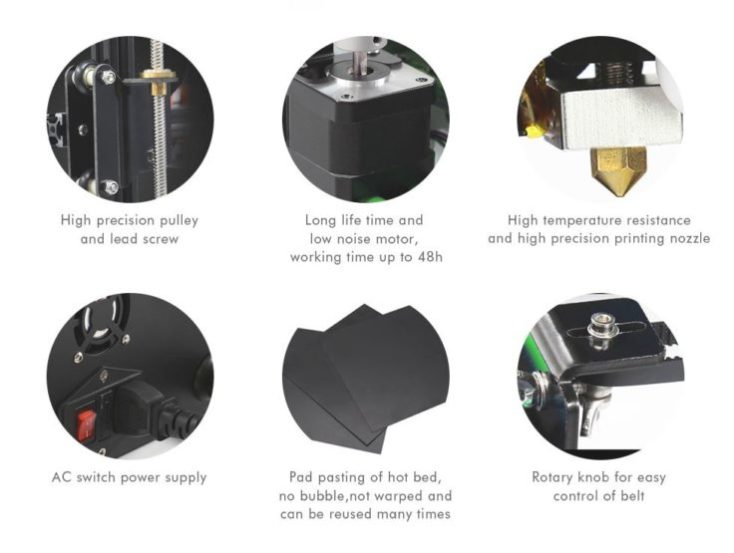 Because the wrong position of the stepper is shown in the manual, it rises some questions about this circumstance. However, in general the manual is well written and easy to understand.

What really frustrated me was the fact, that some screws were rusted. Also, 1-2 screw heads were already battered – how is that possible?

Nearly perfect were the axial-limits during the setup: the cable endings just have to be plugged in.

This is much better than my experience with the Anet A6 and A8. Nevertheless, the CR-10 uses real connectors. Furthermore, the picture shows that firstly, one screw head is battered and secondly, that you can’t simply plug in the cable, because there is a screw.

In addition to that, I don’t really like the x-axis mount of the screw head. This comes with one screw and a nut in the right height located on the T-frame.

Anet struggles here – the nut looks battered. By the way: the package does not contain an open-end wrench but instead we get a filament-scraper to scrape off the filament-leftovers on the hotbed. Well, okay?! 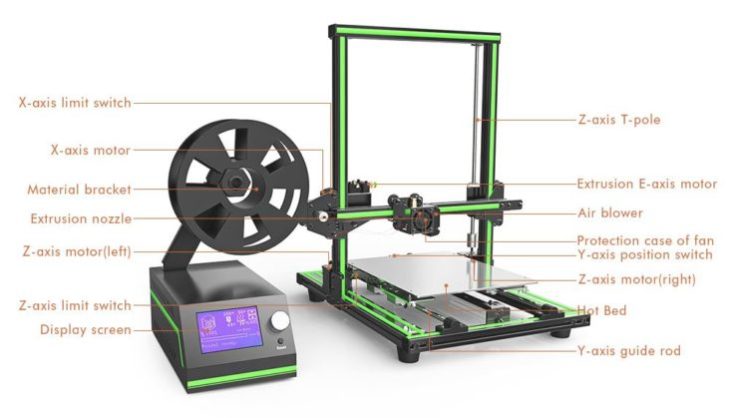 Alright, in the end the whole setup took me about 60 to 80 minutes, because of very unnecessary reasons. This resulted in this article’s critical tone, that you might experience here. This is just because I think that it could have been way better. I see a lot of missed opportunities here. 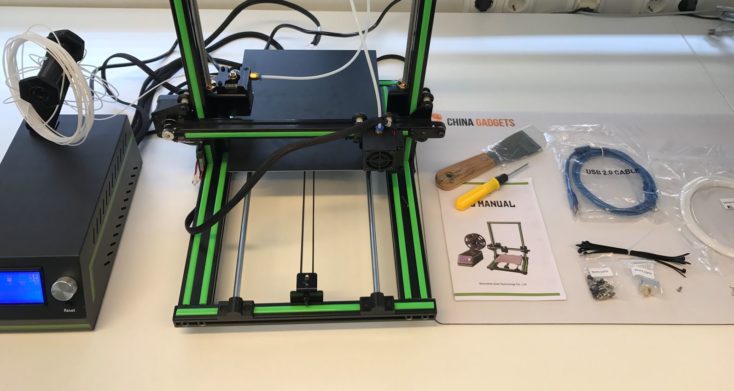 However, the whole setup is easy and, compared to other models, still quickly done. That the build quality is very good is something you will recognize during the construction. It is not perfect but also definitely not as bad, as some people on YouTube suggested.

The frame is in fact very solid and some details like the rubber feet and the drivebelt turnbuckle are great and show: Anet put some thought into this one. A solid foundation for a nice 3D-print is existent.

We have predicted it in our previous 3d-printer reviews: the bowden extruder will supersede the direct-extruders in the consumer area on a long term. The bowden extruder allows significantly faster prints and moves the whole hardware on two single areas. You can find more about the advantages and disadvantages in our extruder-comparison. That I can say: the extruder works very well – more on this later.

The first (and second) print with the Anet E10

Contrary to some Youtubers we were reserved with forecasts. What is the crucial quality of a 3D-printer? Exactly – the print quality. Without a 3D-printer there is no print and no decent review.

After we assembled the E10 completely we plugged it in the power outlet and it worked. This is always a great feeling. I quickly went into the configuration and selected the axes for a short function test. I recognized that I made a mistake while mounting the y-axis but the problem was quickly solved. Then I started a print of the calibration cube after leveling it with my sense of distance and using a quick-and-dirty Cura CR-10 configuration.

Usually I use another filament with the CR-10, the printing speed was 70 mm/s and the travel speed was 140 mm/s. For a first test and as a benchmark, this was way too high but the outcome was very good. Especially when you consider that I haven’t done any precise adjustments and did not use the right configuration.

The single layers are hardly visible, there are nearly no ghosting-effects and the layers are flush. When this would not be the case, it would be a first sign of possible vibrations. Even the volume was okay. The printer and especially the external power supply are less noisy than the CR-10, but if you want to you could exchange the fan which would result in a similar loudness. After the first printing I continued with a benchy with a 75 mm/s print speed.

For me, the filament string in the door you can see in the picture is a minor problem. But I guess that is a result of a bad configuration (keyword: flow, retraction & travel speed).

Personally, I really like how Anet solved the friction bearing of the heatbed, which is, like I assumed, better than Creality’s approach with the CR-10. Also I appreciate the plastic foil for the heat bed, that is similar to Buildtak or Loktak. It fits well and the prints  on the bottom side are smoother. Still, the glass sheet the CR-10 uses enables even smoother results. Nevertheless, the traction is better as with a glass sheet and the prints can be removed very easily – perfect for beginners.

Conclusion: Shall I buy the Anet E10?

To be honest, I expected that either Anet won’t match my expectations at all, because of all the presumptions that rumored in the internet, or they will deliver a better version of the Anet A6. Both scenarios are not the case. This is why my conclusion comes off pretty mediocre. 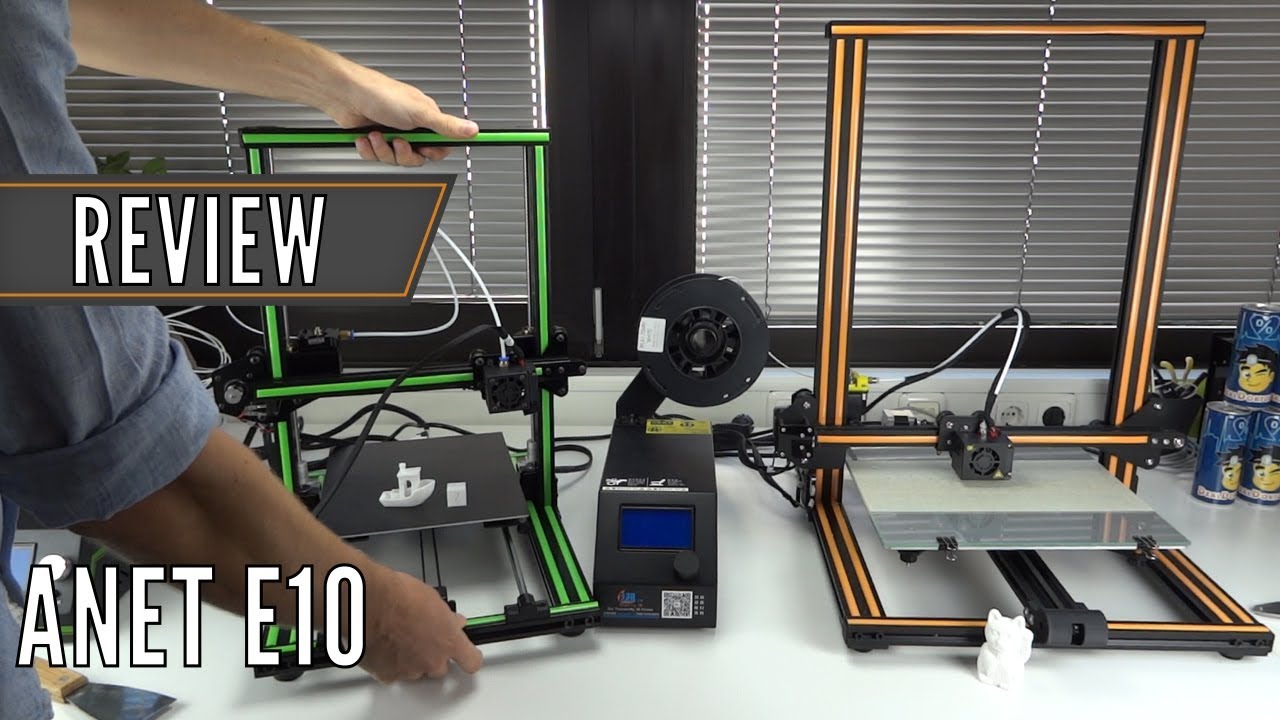 I am a little bit upset about the rookie mistakes, that Anet usually should be able to avoid. It is not their first 3D-printer, they have some experience and so it seems as they would have tried to catch on the hype of the CR-10. The whole setup was a little bit frustrating, just like the setup of the Tronxy X3 or of the Tevo Tarantula. That could have been better.

On the other hand, the print quality and the results are very good, even out of the box, without applying any optimizations. In the meanwhile I did about ten prints and when you do change the configuration in the slicer you can get an even better print quality. The Tronxy X3, which has similar measurements, doesn’t come close to these results. Furthermore, the used hardware is not on the same level as the hardware of the E10.

If you are on a strict budget, buy the Anet A6. But this means that you have to live with a longer setup time (which doesn’t have to be negative point), slower printing speeds and a little bit more configuration time.

If you want a big build volume and a very solid construction…take the Creality CR-10.

In terms of price and in terms of the features, the Anet E10 is located exactly between both 3D-printers. In case you don’t need the big build volume the CR-10 has to offer and you can spend more than 150€ – the Anet E10 is a good choice!