0 Kommentare April 30, 2019by Tim
Hey, guys! Just a heads up: The linked offer is already a bit older and the price of the gadget might have changed or it might not be available anymore.

The future of vacuum robots lies more and more in voice and app control. At the latest since the RoboRock S50 can be controlled via Google Home, the function has found more and more followers. Now the Chinese technology manufacturer Anker has the eufy RoboVac 30C on Amazon on offer. We have tested it. 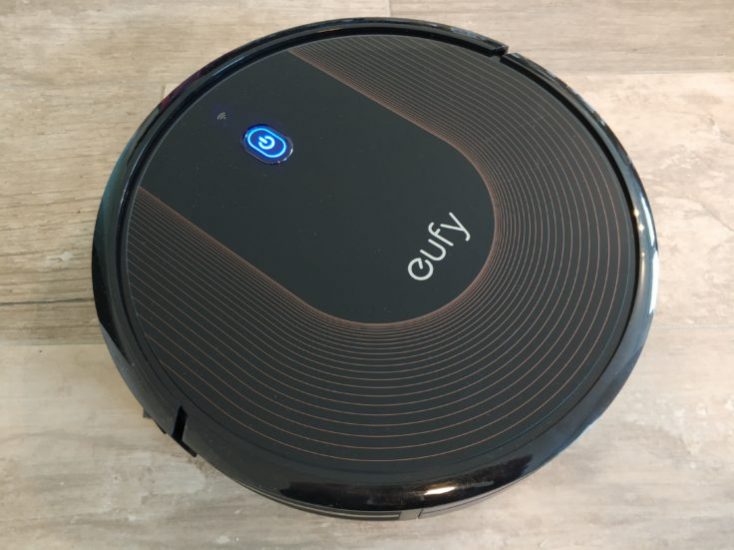 A comparison of the technical data with the Mi Robot already makes it clear: although the RoboVac 30C is the flagship of eufy, Anker’s SmartHome subsidiary, the Chinese manufacturer is not targeting the vacuum robot throne. To put it mildly: the 30C is probably intended for those who don’t want or need the maximum in technology, but place more value on simple and well-functioning operation.

Part of the smart eufy home

Before we start with the scope of delivery, a small classification of the RoboVac 30C in the product range.

The RoboVac 11 couldn’t really convince us and couldn’t be integrated into the Smart Home due to a lack of app control. The RoboVac 30C can be seen as a further development of the RoboVac 30. It also brought with it a suction power of 1500 pa, the second generation of BoostIQ technology (increases suction power if necessary) and App control.

The nice thing about Anker is that it is constantly showing positive developments in its models. Each new model brings a further improvement; the focus of the 30C is on simple operation and pets. Like all manufacturers, Anker also promotes allergy-friendliness.

First of all I would like to praise the packaging, that’s how it has to be: A small, handy package that can be given away both visually and in terms of dimensions. At this point, as always, I would like to point out: Yes, you can also give away vacuum robots for festive occasions. It all depends on the packaging – and that doesn’t mean the cardboard box. ?

Now for the scope of delivery. Besides the vacuum robot you can find it in the well-assorted package:

Positive: A remote control is also included. So you don’t have to use the app to control the robot. For a vacuum robot that does not have a mapping with room partitioning, the 4 m magnetic tape is fine in the scope of delivery. But of course you also have to want to install the magnetic tape in your home, as it is only possible to hide it visually to a limited extent. But you can define areas that the 30C shouldn’t cover.

Especially practical is the low height of 7.2 cm. This makes the 30C one of the lowest models we’ve tested so far. The vacuum robot therefore fits under every conceivable piece of furniture such as the sofa or the chest of drawers. Where it doesn’t fit under it, other models won’t fit under it either.

Even if you look at the processing, you can’t complain. All components are cleanly processed with each other. The design is, of course, a matter of taste, but the robot can certainly be said to have a modern look. However, the chosen black colour is quite susceptible to dust, you have to wipe it over often (provided that it disturbs its owner).

In addition to the points mentioned above, the 0.6 l dust chamber is also an advantage of the vacuum robot. This chamber does not have to be emptied by hand during the 100 minute working time (depending on the condition of the four walls, of course), but only afterwards.

Emptying the chamber is contactless, so allergy sufferers do not have to come into contact with the collected dirt and dust. But at some point you have to clean the dust chamber, where direct contact can only be avoided if you use the dishwasher gloves.

The charging time at the supplied charging station is an average of 5 hours. After 100 minutes of working time, the robot returns autonomously to its station. However, this did not always work in the test, which is due to the chaos principle of navigation. If the robot was in a different room, the infrared sensors no longer aided the robot in recognizing the charging station. Since the robot does not remember the distance travelled from the station, the search for the station can take up to 10 minutes.

The operating volume of 55 dB is absolutely humane, making the vacuum robot one of the quieter models. However, this value only applies if the available suction power is not pushed in the app with “BoostIQ” or “Maximum mode”. At the maximum level, you get just under 65 dB, which again corresponds to the robots with more power. In general, 1500 pa suction power in maximum mode is sufficient, but more would have been nice for carpets.

Speaking of carpets. The robot can handle inclines of up to 12°, and the same applies to 1.6 cm high obstacles. But that is absolutely over, so you have to measure your carpet edges and door thresholds before you buy. Or you can use an alternative model such as the RoboRock S50, which manages a full 2.5 cm.

There is also a third possibility: A ramp. This can either be ordered directly or – if this is understandably too expensive – printed on a 3D printer.

You have a few more possibilities besides the automatic mode if you use the included remote control.

The remote control of the eufy RoboVac 30C

Optically early 80s TV remote control, content at the beginning of the 21st century. The included remote control of the RoboVac 30C is an alternative for those who do not want to use the app for various reasons (data protection?). Or for whom it takes too long – or is too complicated – to reach for the smartphone when the app is opened. In fact, here we have the typical operating functions that we already know from dozens of other models.

If the terms shown do not directly mean something to you, here is the explanation of the terms again:

The first step should be clear: Download and install the App EufyHome (Android, iOS) for free. It doesn’t get much more complicated during the connection process.

Integrating a vacuum robot into the WLAN

Even though the performance of the RoboVac 30C is no longer quite up to date, the connection of the vacuum robot with the app is as simple as with no other model we have tested before. Yes, as always, you have to enter a (disposable) e-mail address for registration (which you never need again afterwards). Yes, the app requires various permissions. But then it goes really fast.

As always, note that vacuum robots can only be connected to a 2.4 GHz network. Nowadays most network providers offer 2.4 and 5 GHz at the same time, otherwise you have to change the WLAN settings. This is easy even without a lot of know-how with the help of search engines.

After switching on the vacuum robot on the underside (stupid place for an on-off switch), the app finds the robot automatically. Just click on it, wait a moment, the connection to the WLAN is established. I really like the interface of the app, it is lovingly designed and easy to use. Why not always like this?

In the app, different suction modes can be selected, which we already know from the ILIFE models:

In addition, the working times can also be scheduled here (unfortunately not several times a day) and the robot can be located (to find the robot again, it makes sounds). In addition, the robot sends push notifications to the user and informs him, for example, if it should get stuck somewhere or starts loading. Firmware updates must be downloaded from the charging station, as otherwise there is a risk that the robot’s battery will run out before major software updates are made.

Small tip before cleaning: Since the RoboVac 30C navigates according to the chaos principle, it is advisable to decide in advance whether automatic cleaning in the four walls should really be combined with BoostIQ or maximum mode. After all, the robot only drives as long as its battery power is sufficient and then returns to the charging station. The two modes with more suction power cause the battery power to drop more quickly : Do you have several carpets to clean? Coarser dirt is present? Combine. If this is not the case, avoid the two more absorbent modes.

In general, the range of functions within the app is quite poor, but everything can be found quickly and is chicly designed. The app control is therefore also something for less technology-savvy, more functions, however, the technology nerd would be quite happy.

The vacuum robot can be controlled via voice control, for which Amazon’s Alexa and Google Home are available. But Anker would prefer to use the in-house Alexa alternative.

Possible commands can be to start, stop or schedule working hours. Exactly the list of possible commands looks like this (always starts with the activation word “Alexa, tell RoboVac to…”):

Instead of “RoboVac” you can alternatively select another name, which you can change in the app settings. In fact, only the manufacturer claims this, possible tests with other names only led to a lack of understanding on the part of Alexa.

The first vacuum robot from Anker could not convince us, the new model was already doing better. Nevertheless, it is inexplicable to me how the flagship model of a large and renowned manufacturer – like Anker definitely is – can find so little connection to the stronger competition. The chaos principle as a navigation method is not up to date, and the range of functions within the app is also quite limited.

The really simple operation of the eufy RoboVac 30C is to be emphasized positively. Those who don’t want to deal with a lot of technology will get their money’s worth here. But also really in the true sense: For a vacuum robot, just under $300 is generally no usury, but with the low variety of functions and the navigation method, it does not make sense to use this model instead of making a larger investment.

Who has nothing against chaos principle, gets here a solid model, which is well suitable for not too technology-mad people.