1 Kommentare March 5, 2020by Tim
Hey, guys! Just a heads up: The linked offer is already a bit older and the price of the gadget might have changed or it might not be available anymore.

Smart scales currently exist like sand at the seaside, the measured results go from extremely accurate to assumptions and estimates. Recently, a model has become available that does not only seem to be visually appealing. The eufy Smart Scale P1 comes with a large number of measured values. Can it work as well as it is advertised? 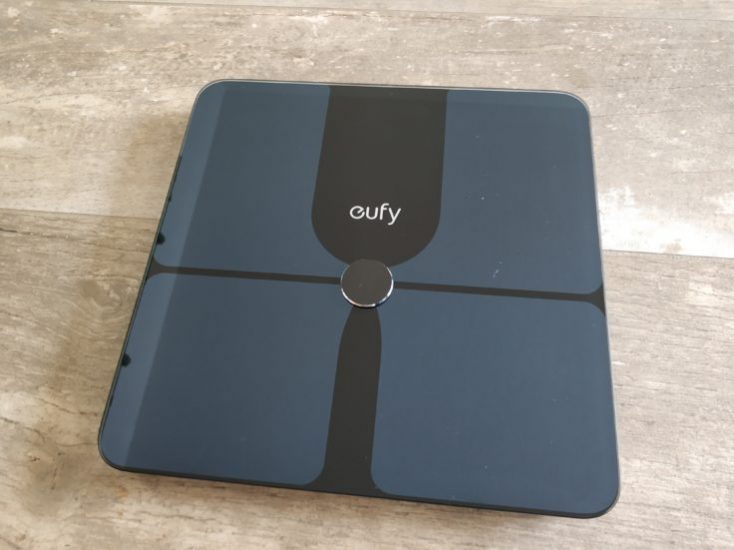 Packaging and scope of delivery of the eufy Smart Scale P1

Since I’m usually used to testing smart household robots, I often carry huge packages of vacuum robots. The P1, on the other hand, is lightweight and nicely packed to save space. The packing is at least not ugly and therefore the scale could be given away well. Whereby the giving away of a scale is probably evaluated as an affront by most, so be careful here. ?

In the scope of supply you will find the scale:

The measured values of the Smart Scale P1

The smart scales from eufy record the following 14 body measurements (at least in theory):

This may sound like the ultimate all-purpose weapon for the bathroom, but it must be viewed with a doubtful eye. Body age? Visceral fat? Metabolic rate? All of this should be determined when I stand on the eufy scale? Just because of the four spiral-shaped sensors? There must be more to it than that.

I find the design of the scale very appealing, it looks modern and makes a difference – for the fact that most scales on the floor are not noticed at all.

When it comes to processing, one can also look forward to the usual good quality of the Anker subsidiary. Nothing jolts, the scales do not take off when placed on top – everything is fine. The CE mark is also part of the package – to be found on the back of the scale.

The App “EufyLife”: Connection via Bluetooth

The personal scale is synchronized with the EufyLife App (Android, iOS), so that you always have a good overview of your data. In addition to the in-house app, the data can also be tracked with Apple Health, Google Fit and Fitbit. Up to 16 persons in one household can use the scales alternately in one user account.

As always you need a mail address for registration – here you can also use a disposable/spam/fake mail address. As long as you don’t forget your password, you don’t need access to your e-mail account.

The app would like to get answers to some questions about gender, age and size. Of course, this makes sense if the app wants to evaluate health conditions and the like.

Then it is necessary to authorize the app on the smartphone to use Bluetooth and location. Bluetooth is used to establish a connection between the app and the scale. This also works very simply and quickly: In the app, the (switched on!) scale is found and connected within seconds.

You don’t have to do anything more than stand on it and see the results on your smartphone. You can change the weight to kg, the default setting displays the weight in pounds.

Everyone knows the principle of a scale: Stands in the bathroom, you stand on it and are happy about the result – or starts crying. A precise measurement should be possible at 5-180 kg. Everyone will find themselves in this grid. Admittedly we could not test this point exactly, because I do not weigh enough and there is not enough space on the scale for objects up to 180 kg.

The following measurement results came out within a few seconds standing time on the scale:

Short explanation to the “report list” at the screenshots above: A friend of mine has also placed herself on it (sometimes with a smartphone), which explains the different results. Using the scale of several persons (up to 16 in number) is simple: Simply enter a new person with age, weight and name in the app and then connect it to the scale.

Measurement results and assessments in the app

On the screenshots you can see as well: The scale measures almost everything that can be measured on the body – and evaluates it. Each result can be clicked and provides an explanation as well as a precise assessment.

My “normal” scale without smart functions always displays 0.4 kg more than the eufy Smart Scale P1 (no matter who placed himself on the scale as a test object). In fact, I find that quite irrelevant. With any value you start from where you want to increase or decrease. Plus or minus 0.4 kg play a subordinate role. You just need a starting value. Of course, this also applies to those who want to keep their weight.

A friend of mine came across other results that weren’t all green, but still made me envious (#muscle mass). The values measured over the days can be displayed as “trends” and a weight target can be set. So you can keep an eye on your weight in the long run.

And where do all these values come from? The topmost visible layer of the scale is ITO conductive (ITO for indium tin oxide). Indium tin oxide is a semiconducting, largely transparent substance that supports the measurements. Most of the values are collected above this, but it is also questionable: protein content and metabolic evaluations in less than three seconds? Scepticism is not inappropriate here. Or why do you always do all the tests with doctors when you can also use a $45 scale?

To be honest, I find it hard to believe all the functions and readings of the eufy Smart Scale P1. In order to determine whether all these values are true, one would have to compare some laboratory tests and visits to the doctor. Here we are not the right experts for this topic, but it is hard to imagine that such measurements can be determined exactly within seconds. But the most important functions in my opinion are trustworthy.

Optically, the eufy Smart Scale P1 is very appealing, and the many measurement options are also tempting, as I have to admit. Of course, you really have to want a smart scale. Of course, if you simply want to determine your weight, you don’t have to take a closer look at the eufy scale.

Of course, the newly published scale is more expensive than “normal scales” without smart aspects. Other smart scales with similar functionality play in the same league. If you want to get closer to your body values, the scales have a lot to offer you. Of course, one has to take care when evaluating the individual measured values that probably not everything is measured completely flawlessly. But the scale is definitely suitable as a reference point and for the optimization of such values.

Since I find the scale optically really ingenious – and the measurements are somehow also very entertaining and interesting – I will test the scale over a longer period of time. If you have any questions, just put them in the comments.