0 Kommentare April 19, 2018by Thorben
Hey, guys! Just a heads up: The linked offer is already a bit older and the price of the gadget might have changed or it might not be available anymore.

The Anycubic I3 MEGA 3D printer scores (only at first glance?) with a very robust construction, quick assembly and well thought-out extras such as a sensor that monitors the filament volume. But this should not be concealed: The construction resembles the popular Wanhao Duplicator i3 already extremely. On paper that sounds great, some features we haven’t tested out-of-the-box – so here is my Anycubic I3 MEGA review!

Would you like to have English subtitles on our videos?

Shipping and Packaging of the I3 Mega

Even though we (honestly) want a bit more selection/alternatives in Chinese online shops, GearBest once again offered the best price.

Externally the carton made a very good impression: No scratches, dents or similar. Since the printer is made entirely of metal anyway, even a small bump on the carton should not harm the 3D printer.

In contrast to e.g. the Anet A8 or A6, whose housing or frames are almost completely made of acrylic and so a few (albeit very, very few) readers had problems with damaged acrylic parts. What you notice directly when lifting: Whew, the box is heavy! 14.5 kilograms (32lb!) – that gives reason to hope for solid quality.

The inside of the carton was also directly convincing when it was opened. The I3 MEGA is packed in two layers of foam very well.

When unpacking, my judging thoughts already fly through my brain and I adjust myself to what awaits me during the next hours of the test. How long do I have to assemble the 3D printer? Are all important accessories included? What about the processing quality? The first seconds are enough for that. The Anycubic I3 MEGA starts directly with a first good impression in the further test process – not every China 3D printer can claim that -).

The cable management looks really good, the timing belts are tight (but not too tight) and the metal of the frame makes a very stable impression.

Anycubic I3 Mega: Set-up in 5 minutes!

The structure – a more difficult topic. I know: I order a DIY kit, e.g. the Anet A6, the setup takes 4-6 hours. If the manufacturer writes that the assembly is done in a few minutes, because everything is pre-assembled, I expect a correspondingly short assembly. All the more frustrating was the Anet E10 body, for example, where I had to loosen pre-assembled steppers, the Allen wrenches broke while trying and I had to retighten all the other screws after all. Instead of the “few minutes”, I was full of surprises and frustration at “few hours”. 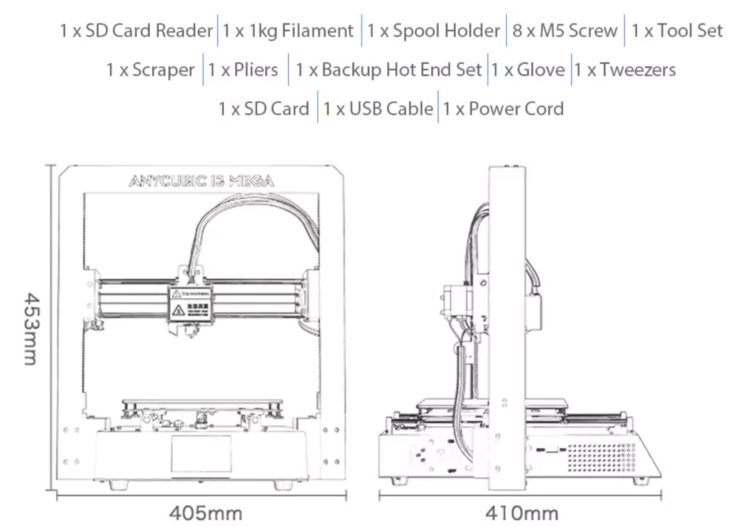 The Anycubic I3 MEGA is different. “Metal-U”, i.e. X- and Z-axis screwed onto the base or Y-axis, cable inserted… ready. I only needed the 5 minutes because I couldn’t really believe it and really meticulously looked for (and didn’t find) loose screws.

Anycubic did good when they set up the content of this package: Since the threads and motors are lightly greased, the manufacturer has packed us, besides all kinds of tools (Yes! The Allen keys are long and stable!) also a pair of rubber gloves. The details create a harmonious overall picture.

A total of only four plugs – one of which is the mains plug – have to be plugged in. Due to the different sizes a confusion is impossible.

I would like to give you some stumbling blocks, tricks or mistakes at this point – no – there simply is no such thing. If one wants to be quite petty now, one could criticize that the assembly instructions are not included in printed form like e.g. the TEVO Tarantula (but it is bad to moderate) or also the CR-10.

As usual, a microSD card with SD adapter (as usual) and a USB card adapter (the first time) with a very good “manual” as PDF is included. The quotes come from the fact that they are only four simple steps for which you probably wouldn’t even need a manual. We uploaded the assembly instructions (included on the 8GB SD card), which contain everything for the first print (leveling, trouble-shooting, etc), after a virus check.

The English is good to very good, version 2.3 is now available (yes, you also maintain your product after the release) and even with the Cura configuration for the first one you are taken by the hand.

For the first prints we use either the Calibration-Cube and Benchy, or included G-CODE files. This time we decided on the well-known owl, which was already included as GCODE on the SD card. Why? Because the manufacturer himself will have sliced the STL with the corresponding configs and of course will try to get the best possible print image.

Before the very first print, of course, the leveling, i.e. the alignment of the hotbed, is imminent. Between nozzle and heating bed should fit max. one receipt – at all four corners and of course also in the middle. If that is not the case… believe me… the pressure will be modest. Anycubic has already stuck a matching paper on the glass plate (another tiny bonus point). This step is described in detail in the user manual or in various test videos from us.

The navigation through the menue is done via the touch screen, the English is absolutely understandable, the operation is well thought-out and so the leveling is already done after about 3-4 minutes. The touch screen can also be used to preheat the bed, deactivate the steppers or e.g. “eject” the filament, as is usual with other 3D printers from China.

So quickly guide the filament through the filament sensor to the stepper and let the filament draw in by menu option. It comes with 1kg of black filament. Running. Other 3D printers sometimes included a meager 10m or no filament at all. So with the Anycubic you can really get started right away (and with 1kg of filament you can print a lot). The first printing of the “owl_pair.gcode” is started from the SD card.

Although the hotbed has a glass plate (for smooth undersides), it still has a special coating, so that the print also holds without problems the first time. Amycubic calls this “Ultrabase”.

When I waited for the hotend fan to start up (mostly from layer 2) – I was disappointed. The fan or the whole 3D printer is amazingly quiet. This is probably also due to the stable construction. Vibrations do not occur, so that the pressure ultimately also benefits from it. At the second press I listened very carefully: You can actually hear the hotend fan from layer 2 turning off quietly.

The menu can also be used to pause and resume printing. I tested the feature the first time I printed it and there is nothing to complain about. 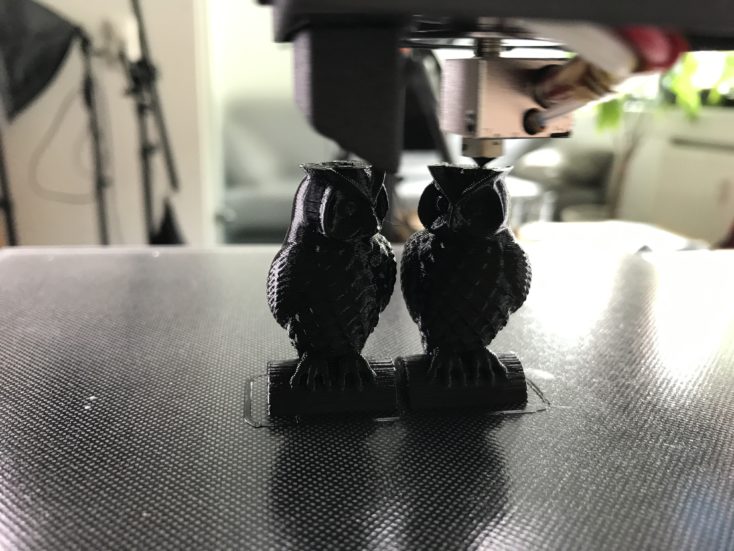 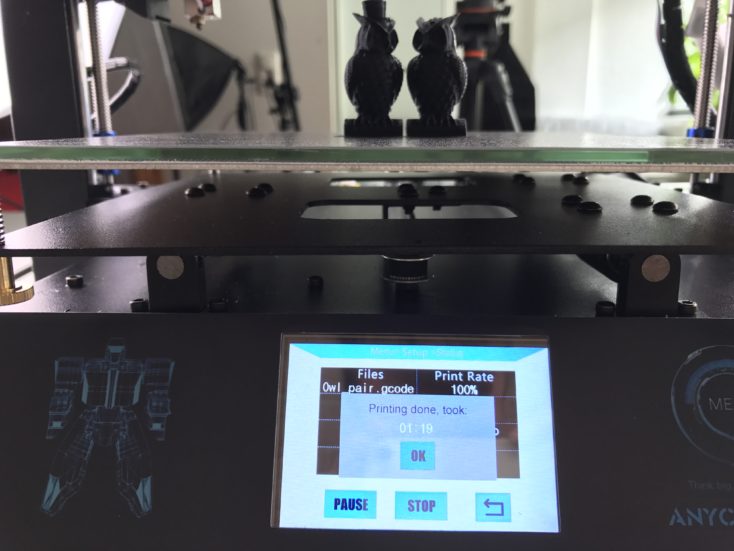 The two owls look really good (for the first print). Even the contours of the “branches” are recognizable. The back has become so smooth that it shines. There were 2 very thin threads between the two owls, which required a minimal adjustment of the flow parameter. 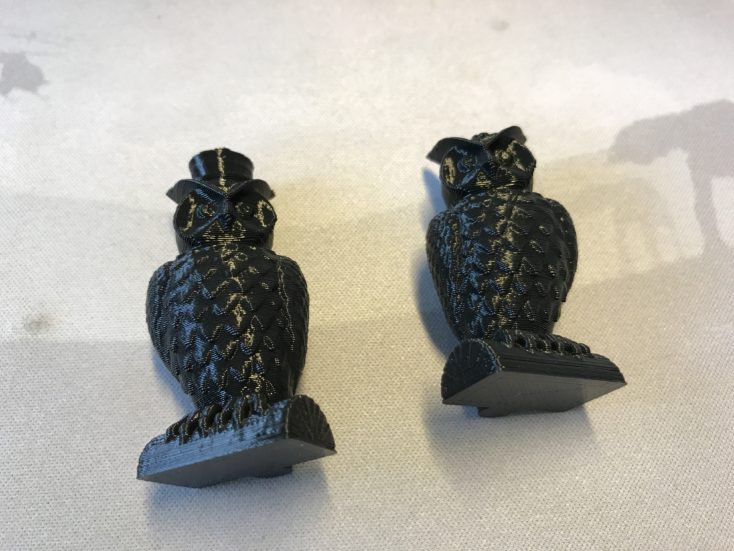 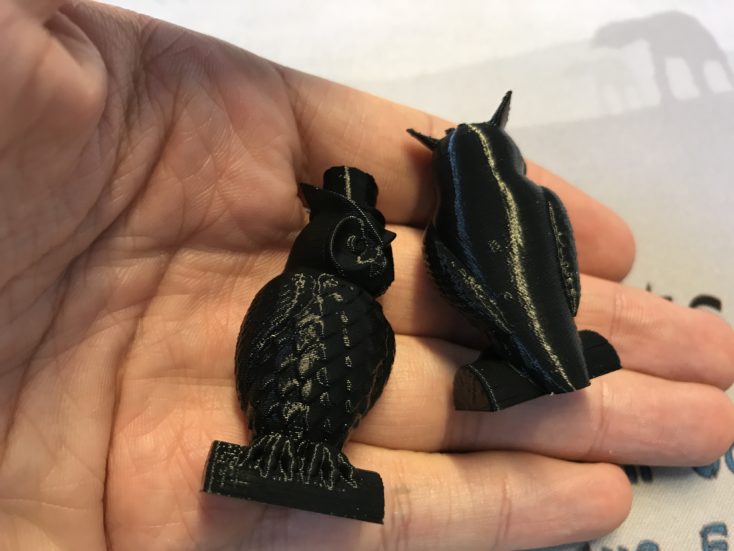 The print could be very well removed from the glass after cooling down. The enclosed “scraper” (spatula) was still not used after 10 more prints and should be the last resort of choice anyway.

In how far the second stepper for the X-axis, so that it does not “sag”, is responsible for the good print image, I can’t clarify without doubt – but there is already a reason why e.g. Creality has missed an update for the CR-10 with the CR-10s. This one has a second stepper. Of course: a second stepper, a second bracket, a second end stop also costs money and requires a suitable board.

But you can still put a little love in the slicer program of your choice. I had taken over my CR-10 profile (apart from the pressure chamber sizes) 1:1. The Calibration-Cube looked very good, but is still 0.06mm and 0.04 and -0.05mm above the targeted 20mm. The “elephant foot” also appears on the first layer. However, this can be easily improved by reducing the hotbed temperature and less filament on the first layers. However, to write about these two “little problems” is already whining at a high level.

Should a print really, I mean really, go wrong, a complete hotend is included as a replacement for these cases. With us, a hot end is never so congested – but it is better than necessary. An end stop for one axle is also included as a spare part.

What I really learned to appreciate after 10 prints: The touch screen. Navigating through the menus is much more fun than the hooked plastic buttons and/or wheels of other China 3D printers.

If you use a print server such as Octoprint or similar to print remotely or to monitor the printing process, you can do without convenient operation.

Don’t you want to do handicrafts, want to start printing right away and use a “just round 3D printer”? Don’t use the Tevo Tarantula, don’t use the Tronxy X3, don’t use the Anet E10, use the very Anycubic MEGA I3. After the somewhat mixed experience with the Anet E10, for example, I really enjoyed the Anycubic from unpacking (quality!), through assembly (accessories!), at the first print (accuracy!) to analyzing the first printing results (hardly any upward air). That’s the way it should be.

Finally maybe something very personal: An Anet A8 looks really nice with the “flying around” cables, of course, the Anycubic MEGA I3 is still the “most beautiful” 3D printer for me at the moment.

This is a conclusion that sums up my experience. Of course there are many other (subjective) criteria – so if you have any questions – go ahead!