AreoX U8 Smart Lock with fingerprint sensor for $57.47

2 Kommentare June 30, 2019by Jens
Hey, guys! Just a heads up: The linked offer is already a bit older and the price of the gadget might have changed or it might not be available anymore.

Besides bombing the smartphone market, Xiaomi’s primary goal is to make every part of your home smart. The range already includes a smart door lock, and now the smart bicycle lock. The company cooperates with AreoX and presents the AreoX U8 Smart Lock, which is equipped with a fingerprint sensor. 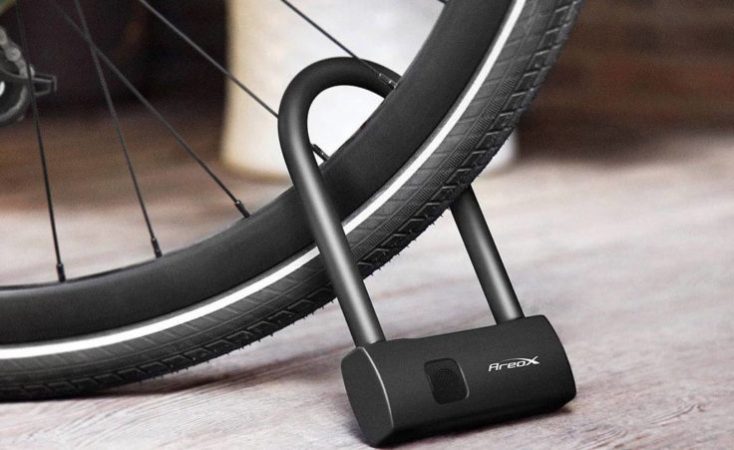 The smart bicycle lock is a shackle lock that works basically like a padlock. We don’t think there’s any need to explain how it works here. The shackle is opened for locking, placed around the spokes or frame of the bicycle and then the shackle is locked. There are probably two different versions: one with a height of 22.48 cm and one with a height of 30 cm. The actual lock on both versions measures 3.2 cm in width and 13 cm in length.

Our model is the short version. However, this is not long enough to connect the front wheel to the frame on most bicycles. And also when connecting to a bicycle stand, fence or lamppost, you are somewhat more limited. If you want to be on the safe side here, choose the large version of the lock that gives you a little more room to manoeuvre.

Apart from that, both locks do not differ, the quality is the same. The small lock offers the advantage of being smaller and lighter, and it costs less.

The handle is of course made of stainless steel to make it more difficult for potential bicycle thieves to break the lock. The manufacturer AreoX also uses a two-way locking system. In other words: both contacts to the lock core can be opened. The locking cylinder is a class B locking cylinder, which is classified as “safe” by VDS. In addition, the AreoX U8 Smart Lock is equipped with an IP65 rating, making it dustproof and protected against water jets. Now that we have used the lock for a while and the wheel has been out in the rain, everything still works as it did on the first day. 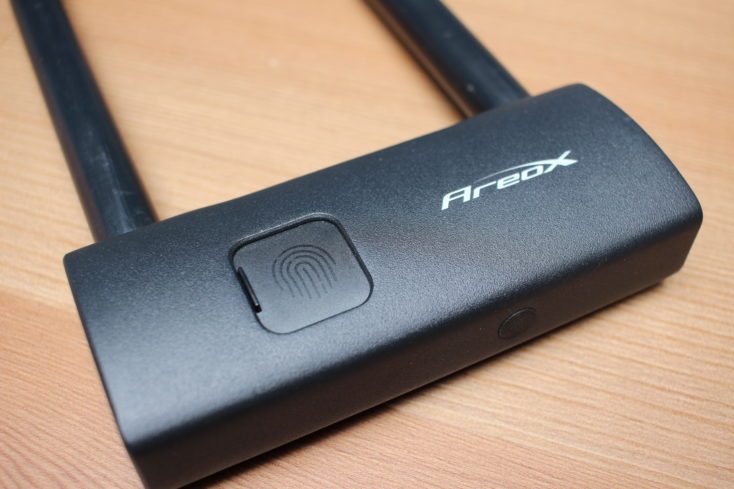 The processing seems very good directly at the first touch. The high weight of the lock is immediately noticeable. The housing of the lock is made of one piece, with the exception of a cover on the back, under which the battery is located. However, this cover cannot be removed without further ado, but more about this later in the “endurance test”. On the underside there is a small rubber plug, underneath there is a classic lock for a key. Yes, there are two enclosed emergency keys with which the lock can be unlocked mechanically if necessary. This rubber cover can hardly be removed without tools.

The most important feature is of course the built-in fingerprint sensor in the AreoX U8. It works exactly as described and unlocks the lock in less than a second. It doesn’t quite reach the speed of the scanners in modern smartphones, but in fact you hardly notice any difference. As soon as the lock is unlocked, the clip is pushed about half a centimeter out of the lock and can simply be removed. 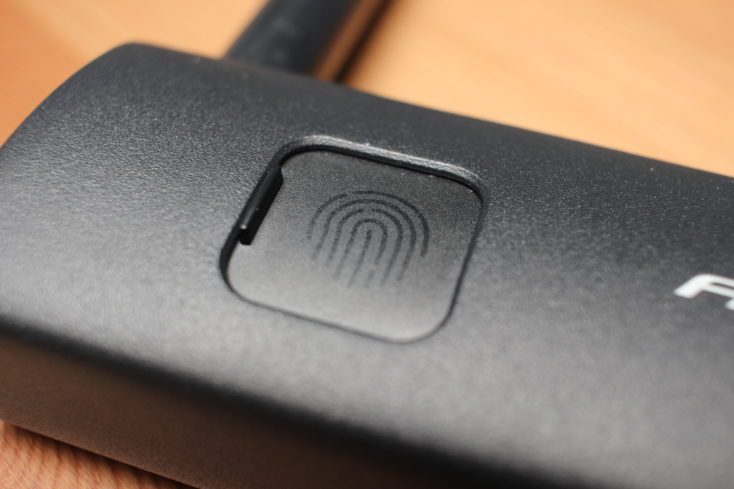 By the way, the scanner itself is located behind a small cover in order to protect it from the weather. Directly above the scanner there is a small LED and the USB-C port that charges the lock. This connection itself is located behind a rubber cover. The LED gives feedback about how you can operate the lock and lights up in red, blue or green. I will explain the individual functions below. According to the manufacturer, the scanner works even in wet conditions. We can confirm this so far, but sometimes it doesn’t hurt to wipe it over briefly if your fingers or scanner are really wet. That the lock couldn’t be unlocked for this reason never happened to us. So at least that’s an advantage over many smartphone finger pressure sensors. We already know a similar concept from Bluetooth padlocks.

But of course you already suspect it: a fingerprint sensor also needs electricity. The capacity of the built-in battery should be 260 mAh. This should be enough to be able to use the lock for a year before you have to charge the battery. If the battery level falls below 15%, you get a warning; in this case the LED flashes green when you unlock the lock. However, we couldn’t try this so far: despite an above-average number of closing operations, it was of course not nearly enough to empty the battery. To charge it, you use the USB type C slot, which is located above the sensor. 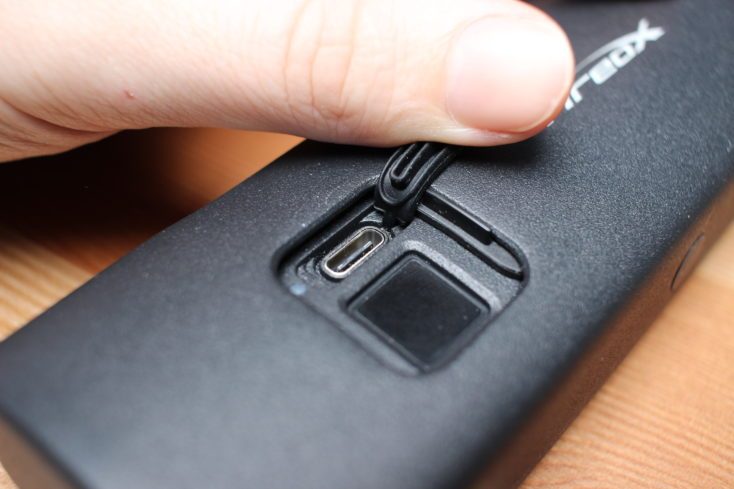 No app is needed to set it up, instead the lock can be fully operated using the fingerprint sensor. The accompanying manual explains this in English or Chinese, but here is the short version again. A total of ten different fingerprints can be registered. The idea, of course, is not necessarily that you scan all your ten fingers, but that the lock can also be used by several people.

In order to register a finger, one holds the finger about three seconds on the scanner. When a beep sounds and the LED starts flashing blue, the capture starts. Press the finger repeatedly on the scanner to capture the print. After ten repetitions, a long beep sounds and the LED lights up blue continuously. The first finger thus captured becomes more or less the “main account” that is needed from now on to register further fingerprints or to delete existing ones. The procedure for further fingerprints is the same, with the difference that the main account must initiate the procedure in each case.

The lock cannot be broken by hand. Pulling and pushing with hands and feet has no effect, and the disguise doesn’t offer a good point of attack to lever it up somehow. But we haven’t used any tools yet.

What is still outstanding is the absolute endurance test. The most sophisticated mechanism is useless if you can cut the lock with a nail file. Admittedly, we are not perfectly equipped for this (in the office) and have not tested a comparable product so far. Before we start with the AreoX U8 with screwdriver and pliers, we would like to ask you the same question: What should we do with the lock? Fire, water and metal – what would be your preferred method?

Conclusion on the AreoX U8 Smart Lock

Of course the AreoX U8 Smart Lock is not a necessary gadget. Nevertheless a certain advantage can be seen: Not worrying about the key or losing it is practical. After all, you always have your finger with you. Especially when you ride your bike to sports, play a little basketball or go for a walk, you don’t necessarily want to have a key in your pocket. And instead of having to share a key, you can simply give family or friends access to the lock.

We can see: All the functions around the fingerprint scanner work well to very well. In this respect, the lock is a thoroughly successful gadget. And let’s be honest, unlocking the lock with your finger is kinda cool and just feels futuristic.

What’s left is a real endurance test. How easy is it to crack the lock? Because only if it can withstand considerable forces and the use of tools, you want to secure your several hundred (or even thousand) Dollar expensive bike with it. In addition, the price is higher than expected and is currently a little under $50. If you are willing to pay for it, and perhaps you prefer a used bike under $100, we can already recommend the lock to you. If you want to be sure that your $2,000 e-bike won’t be stolen overnight at the station, you should be careful and wait.