0 Kommentare February 5, 2022 by Maike
Hey, guys! Just a heads up: The linked offer is already a bit older and the price of the gadget might have changed or it might not be available anymore.

Laser engravers are certainly not a toy or a gadget to be bought lightly. But if you approach it with a minimum of caution, you can make some pretty cool stuff. We got the Aufero Laser 2 and tried it out as absolute beginners. You can find our experience report here. 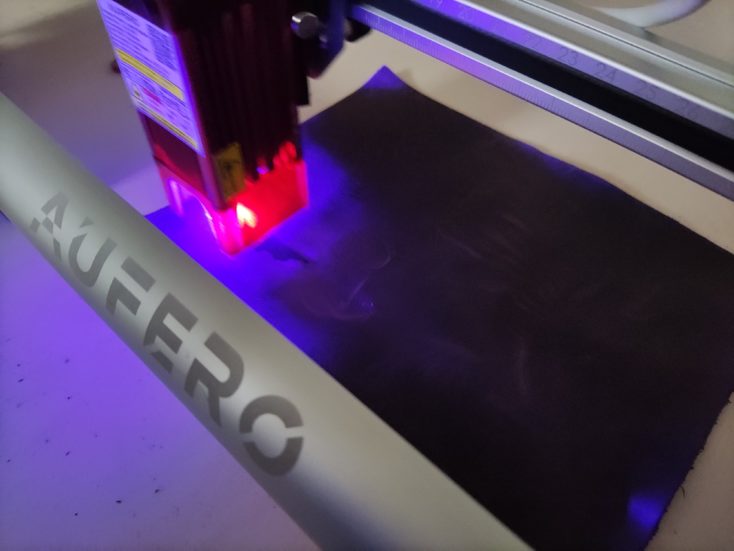 This article is by no means meant to be a 100% correct guide to everything, but an experience report from a beginner, for potentially other beginners. Personally, I’ve always found laser engravers very interesting, but I also have a lot of respect for working with them. Now being able to try out a beginner-friendly device is very cool and I’m looking forward to good tips, suggestions and a healthy exchange of information in the comments 🙂 .

The obligatory note right in front: Laser engravers are not toys! A laser can cause serious injuries to the eyes or even blindness if used carelessly. The engraver should be operated in a separate room and absolutely out of reach of children. Under no circumstances should you look into the laser during operation. Safety glasses and/or an appropriate cover over the unit are strongly recommended during operation. However, when used correctly and with appropriate precautions, engraving is generally safe.

As already written in the article on the Aufero 1, this product series is particularly beginner-friendly, mostly pre-assembled models. We are curious to see how easy it really is to set up and use as a beginner. The Laser 2, on the contrary to the Laser 1, is bigger, more expensive and needs to be assembled by yourself, although not by much. Other than that, there are no major differences.

As mentioned earlier, the Aufero Laser 2 is mostly pre-assembled, just like its predecessor. Everything arrives nicely and safely packaged. Included are three certificates for the device and the laser, makes at least on me a good impression. 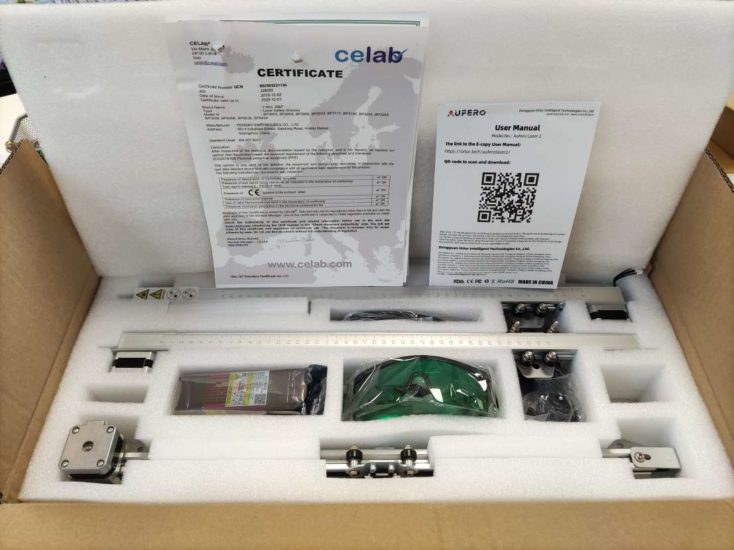 Our Aufero Laser 2 comes in a package with the LU2-4-SF Short Focus Optically Compressed Laser Module and can thus cut and engrave. Additionally included and always important: the safety goggles. We also have a power supply with EU plug in our package.

In this first field report, we will focus purely on engraving for now, even though the laser can cut. However, Aufero itself says that for cutting, the LU2-4 LF laser is more suitable.

Assembly of the Aufero Laser 2

The only drawback is that some of the small screws don’t fit well, the included Allen key is just minimally too small, other Allen keys were unfortunately too big. But with the help of a thick rubber band we managed to fix all the screws.

Fortunately, you no longer have to assemble the rails and everything else, but for these simple connections of the frame parts is enough even the smallest craftsmanship. 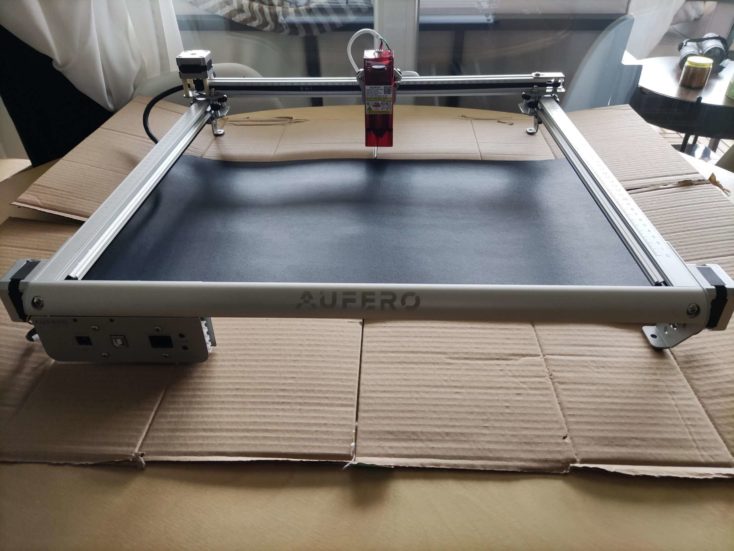 We put a little cardboard under the engraver so the table wouldn’t get pressure marks, but in retrospect I think that’s pretty unnecessary. The entire engraver is not heavy enough to do any damage there, just 4 kilos. For the lasering itself, we then put another small mat over the cardboard and then put our MDF board on top of that. This worked pretty well, since we had to move the board around a few times and it was pretty easy to place. It’s not absolutely necessary, though. In later attempts, I simply placed it on an extra particle board.

Since the laser engraver consists of aluminum parts, the entire part is not particularly heavy, the assembly is very good to create alone. Super relaxed, with video watching in between and me look at everything really carefully, so as not to make any mistakes, the whole thing took me less than an hour. With a little more planning and skill behind it, it can be done much, much faster.

In this section I will briefly discuss the installation of LaserGRBL, because I only used this software and therefore I can only inform about it. LaserGRBL is available as freeware for free. The software can be easily downloaded from the manufacturer’s site. After it has been downloaded and installed, a Custom Buttons Pack has to be downloaded additionally. That’s how it went at least according to the video tutorial of the Aufero YouTube channel, you can also find everything on their homepage.

This gives you the frame button for example, which I used every time later on to position the laser correctly, more about that in the next section. After successfully installing everything, I followed the other YouTube tutorials and initially adopted their steps 1 to 1. Whereas LaserGRBL itself doesn’t seem ultimately complicated either. Aufero offers a short instruction video for many materials. This is very helpful for beginners like me. Nevertheless, these videos do not go into any details, everything is shown only very briefly. Quite sufficient for the first attempts, but I already know that this will not work for the future and larger projects.

Ortur, the company behind the laser engravers, offers not only the tutorial videos but also support via the homepage as well as the Official Ortur User Group and Official Aufero User Group on Facebook etc.. In addition, you can take advantage of a trial program, which means sending Ortur your desired design and they will test it out for you in laser engraving.

In the pictures you can see that the Aufero Laser 2 is able to laser very fine and precise lines (0.4mm exactly), without them disappearing into each other. Likewise, it is able to display the different color levels quite clearly and distinguish them from each other. 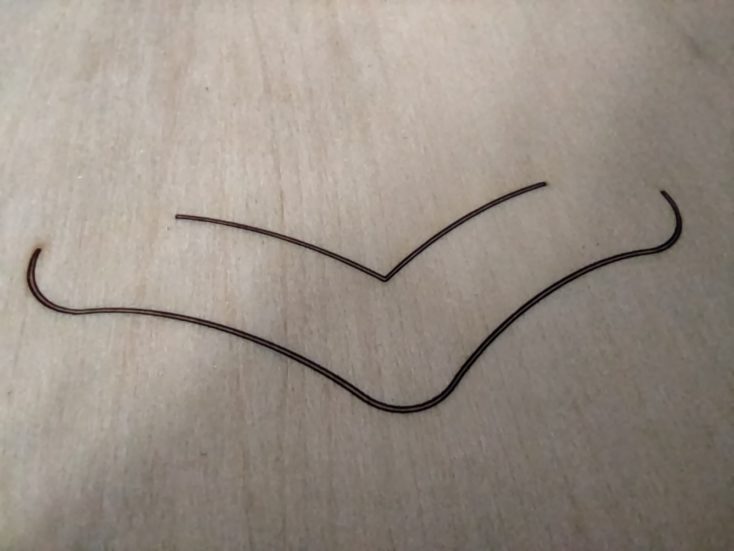 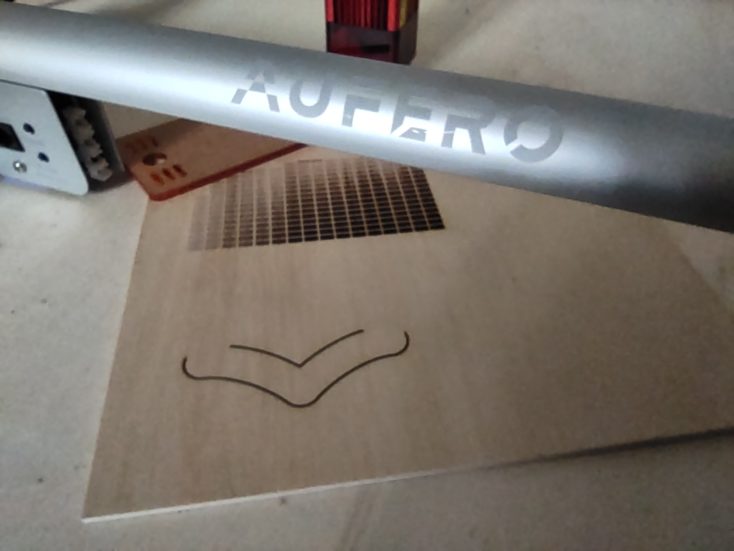 First lasering with the laser engraver

After everything was set up with the help of the videos, I decided to use a photo and a small MDF board. I followed the video’s instructions exactly, imported the image, applied the settings, measured the distance of the laser, and then used the “Frame” button to see that the final result was reasonably centered on the board. In the videos the person just pushes the laser by hand, I didn’t want to do that every time. That’s why I let the laser move the frame by itself in its position and positioned the wooden plate accordingly.

The software says a laser duration of about 1 hour and 45 minutes. After I was satisfied with the position, the process was started. Of course, only with safety glasses on! The laser gets right to work, moving up line by line as specified in the settings. There is smoke rising from the board and a pungent stench. But we were prepared for that. Lasering without good ventilation, preferably probably a whole ventilation system, is not a good idea.

After a quarter of the time had passed, the resulting part doesn’t look very good. Not only was it hard to see anything through the safety glasses and the darkened room, the settings just didn’t fit right. As you can see in the picture, the lasering was way too deep and only the heights and depths made it roughly recognizable what the picture was supposed to represent.

Realization: the settings were perhaps not correct or I was too stupid to recognize the material. The manufacturer’s examples, a few pre-lasered materials, look very different. So I then tried to deal a little more with the software and see if I could fix the error.

And indeed there is the possibility during the import of the image and the following setting options, a little bit hidden, to select presets for laser module and material and to orientate on them. To do this, you have to click on the small book icon on the right in Engraver Speed and another small window opens. 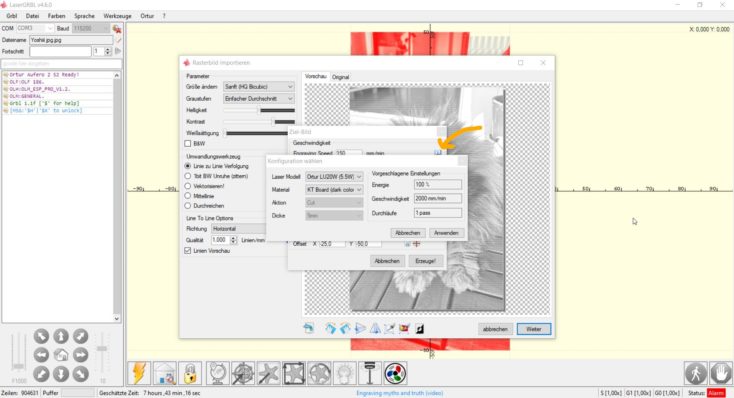 In these settings, the speed of the laser was set to 2000 mm/min. After that, the print took only about 15 minutes – a much shorter time than before. In my eyes, the second attempt turned out much better. 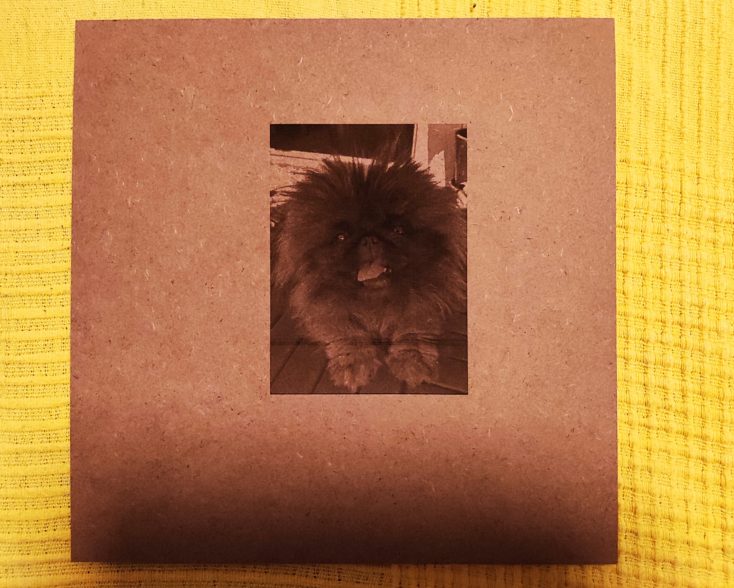 Trying out other materials

After engraving finally worked successfully on the MDF board, I wanted to test out the other materials available to me, no big projects yet, but first get a feel for laser engraving itself.

So I decided to laser our logo on one of the leather pieces. Our logo is not a sophisticated image and relatively easy to see. I thought it would be easiest on a dark material like leather. In my opinion, so far the best result of my attempts:

The process actually only took under 4 minutes, with the leather setting via the little extra menu. Laser leather actually smells strongly of burnt hair, if anyone is interested. But I find the result really very good, clean and neatly recognizable.

Encouraged by my successful attempt, I wanted to try lasering an image onto darker fabric after all. The material package also includes a few pieces of denim. So I took the picture of the dog again, placed one of the metal plates under it according to the video instructions from Aufero and tried to select the remaining settings via LaserGRBL. The problem was unfortunately that no denim was directly available for selection and I then unfortunately selected the wrong material (“non-woven fabric (dark”, the rest is cut off). 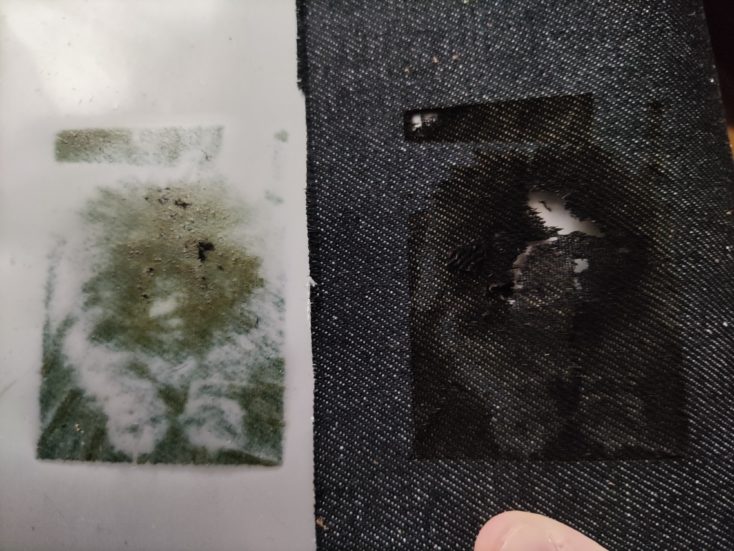 The process took about 10 minutes. While wood just smells burnt and leather reminded me of burnt hair, the smell of “burnt” jeans was just disgusting. It also initially looked like the process had succeeded. I’m not sure why (help, tips & tricks greatly appreciated in the comments), but the laser basically melted the denim and the metal plate underneath got the shadow of the image off, sticky remnants.

A successful introduction to lasering?

Overall, I’m happy with my introduction to lasering. As I said, I really had no idea what was coming. But the setup was fun, the help from Aufero is simple but effective, and I like trying things out (who would have thought). Being able to control and follow the whole process is fascinating and I would love to try more things in the future.

There are a few points that I would like to emphasize again: a laser engraver is not a toy and certainly not a device that you just buy. However, if you are interested in this area and have always wanted to try out an engraver and want to do it as easily as possible, you will find a good device here with the Aufero Laser Engraver.

But you also need the right space for it. I must honestly say that I underestimated the odor development, although expected. You can’t be in a room with the Laser Engraver in process without a decent ventilation system. Even in the next room, the odor wafts through the apartment. With good ventilation for me personally no problem, but it must be considered. Just as always the general precautions when working with lasers.

For the future, I hope to get helpful feedback, of course, but also time for further testing and a plan for a real project. I think after this initial getting-to-know-you phase, there’s a lot more you can discover with a laser engraver.