Augmented Reality pistol for smartphone for $14.25

1 Kommentare May 25, 2018 by Maike
Hey, guys! Just a heads up: The linked offer is already a bit older and the price of the gadget might have changed or it might not be available anymore.

Virtual reality has been booming in recent years, not least because of the many cardboard VR glasses and the flagships of HTC, Oculus and Sony. Through devices like Google Glasses, Microsoft’s HoloLens and apps like Pokemon GO, however, we are increasingly coming into contact with augmented reality. So the extended reality, where the real world is supplemented by computer graphics and information. If you are curious and want to try the whole thing out, you can now simply download a suitable app onto your smartphone and start using this Augmented Reality pistol, for example. 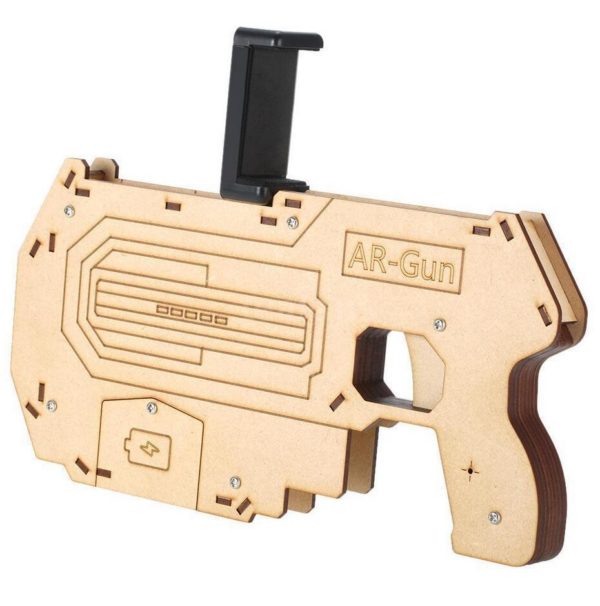 This wood pistol acts a little like the Wii’s controller. The movements from the real world (here the aiming) are captured by a sensor built into the smartphone and translated into the game. The technology in the gun itself is limited to the trigger, which can be connected to the mobile phone via Bluetooth. To get started right away, you only need two AAA batteries. download the appropriate app and mount your smartphone in the holder. For this app “AR-Gun”(Android, iOS) you won’t find too many games yet, but the developer promises more games.

The 28 x 21 x 2.5 cm large and 150 g heavy toy gun fortunately does not look very realistic. But I would still advise against going for a walk in the pedestrian zone.

Whether such a gimmick is something for children, everybody has to decide for himself. At least for adults, it’s cool to get a first glimpse of what augmented reality could soon be. But what about you, do you think AR will be the next big thing or are you more critical of the whole thing?