0 Kommentare July 7, 2018by Thorben
Hey, guys! Just a heads up: The linked offer is already a bit older and the price of the gadget might have changed or it might not be available anymore.

If Aukey had not given the speaker an elliptical form, but a round one, the speaker would inevitably be very reminiscent of a loudspeaker from JBL. The passive speakers are a trademark of almost all models. Can the Aukey Eclipse Bluetooth Speaker keep up? We tested it! 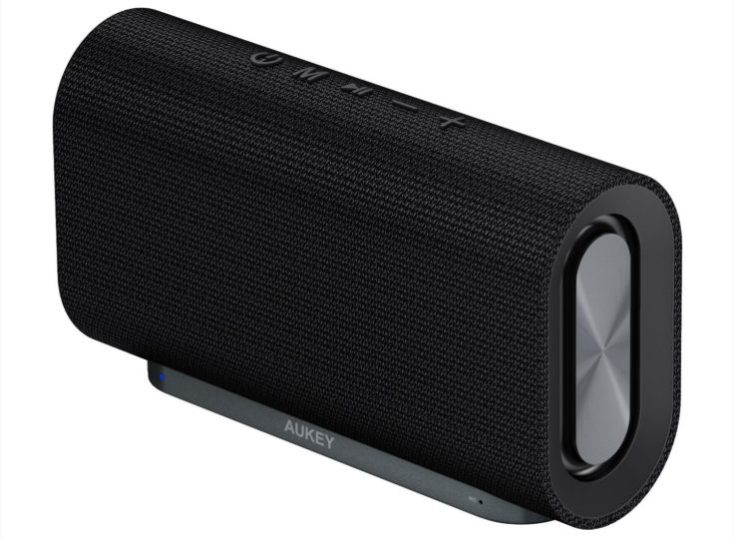 The scope of delivery of the Aukey Eclipse Bluetooth Speaker SK-M30 includes, besides the speaker itself, the typical Aukey accessories, which are included with practically every speaker. This includes a micro-USB charging cable, an AUX cable and an instruction manual with warranty card. 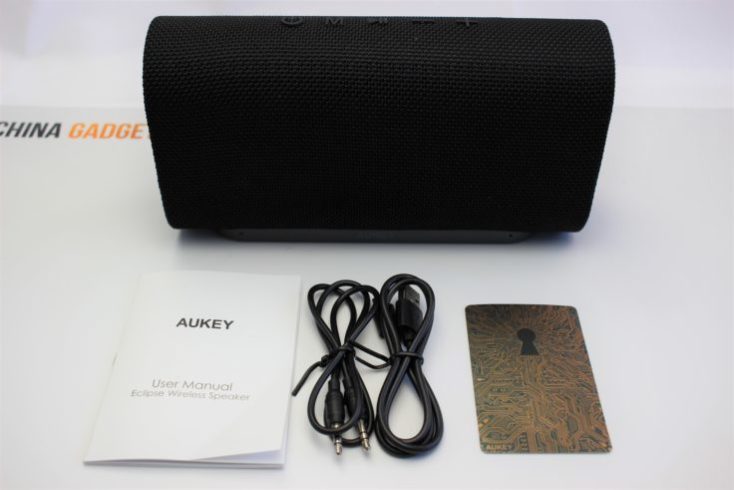 Similar to the Tronsmart T6 Bluetooth Speaker, the Aukey Eclipse SK-M30 is also covered with a textile fabric. Unlike current JBL or UE speakers, however, this is not waterproof. 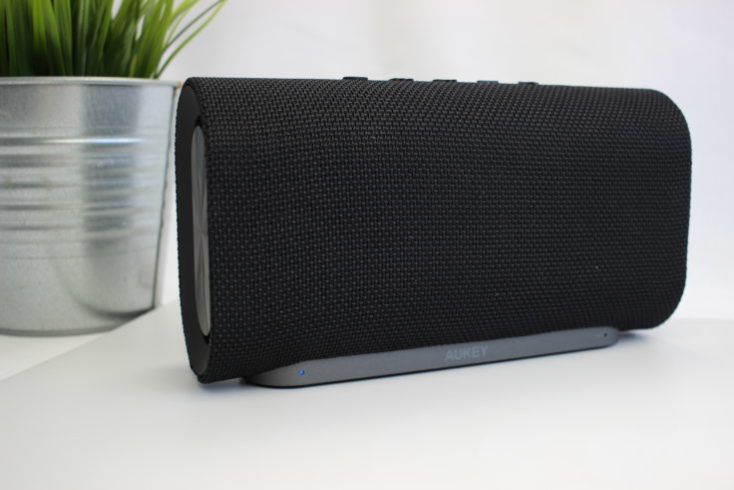 On the short sides, both left and right, are the passive speakers already mentioned, which are characteristic of speakers such as the JBL Charge or JBL Extreme. The passive speakers are made of a flexible rubber, on which a metal cover is glued in the middle – quite stylish in my opinion!

Since the passive speakers are recessed about 4 mm into the housing, they are protected by the outer edge in case the speaker falls down or anything similar. Measuring 211 x 114 x 64 mm and weighing 794 grams on a fine balance, the speaker is quite compact. Unlike the Aukey Radius, it has only a very small base, making it a good choice for excursions or travel.

The underside of the speaker is also completely rubberized, which gives the speaker a firm footing and keeps it calm even with loud music.

All in all I like the loudspeaker quite well, it is solidly processed and shows no processing errors. Its simple design and compact construction make it a companion that can be used both indoors and outdoors. Too bad that an IPXX protection certification is missing.

Sound of the Aukey Eclipse SK-M30

Let’s summarize once again, inside the loudspeaker are two 10 Watt drivers built in. In addition there are two passive speakers, which should give the speaker a good bass boost. This already works very well with the Tronsmart T6. 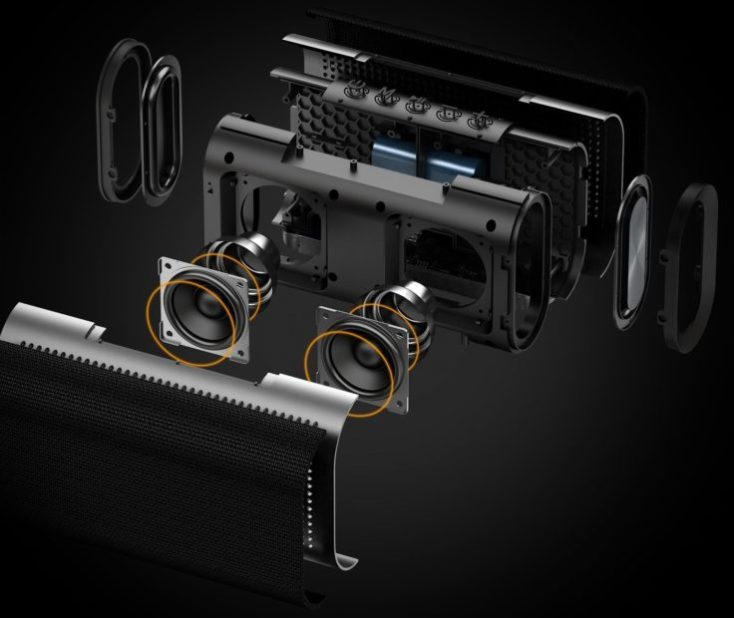 During our tests we compared the speaker with some others. Based on data provided by the manufacturer, JKR KR- 1000, Tronsmart T6, Aukey Radius or Inateck BP2003 are equivalent “opponents”.

I like the speaker especially in the midrange, acapella recordings sound very good! Compared to the Inateck BP2003 the midtones are better, but the highs of the Aukey Eclipse are slightly weaker. Despite the large (and stylishly designed) passive speakers, I am a little disappointed with the bass of the Bluetooth speaker. It looks like an oval JBL charge, but an equivalent tone in the bass range is not achieved.

Compared to the JKR KR – 1000 or Tronsmart T6 the bass of the Aukey Eclipse is also weaker. However, it is also noticeable that the JKR -KR 1000 has a rather lousy midrange and its sound consists almost exclusively of high and low frequencies.

The connection possibilities are unfortunately quite limited, the speaker has, with Bluetooth 4.2 and an AUX connection, only the basics.

For example, if you still want a Micro-SD slot, you should use the JRK KR – 1000, but the Musky DY-19 offers even more connection options.

A total of five control buttons have been installed, these are located underneath the textile jacket and are marked from the outside by rubber logos. 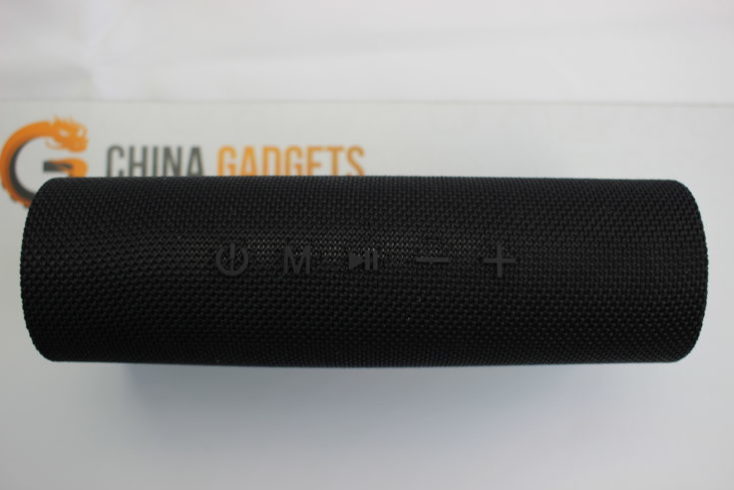 The battery capacity of the Aukey Eclipse is 4000 mAh, so the speaker is in the solid midfield. According to the manufacturer, this should last for about 12 hours of playing time, at a volume of 50%, the recharging process should last 4 hours.

During our tests at a volume between 40%-70% the battery lasted about 9.5 hours, which is a solid value despite the difference to the factory specification. Of course, the speaker can also be charged via a power bank.

The charging time varies depending on the socket adapter or USB hub used. In our case, charging only took about 3.5 hours. What I also like is that the speaker does not give any linguistic feedback – there is therefore no such thing as an annoying “low battery” announcement, as with the JKR KR – 1000.

Aukey is an established Chinese manufacturer with a broad product portfolio at Amazon Thanks to its reliable and accommodating support, Aukey has earned a good reputation. The Aukey Eclipse is no exception either, like almost all of the manufacturer’s products it shines with solid workmanship and a simple or timeless design. The construction of the speaker allows it to be stored space-saving in a bag, but it can also be placed inconspicuously on the shelf in the apartment.

The sound of the speaker is basically solid. I like it in the high and midrange, but unfortunately it wasn’t quite convincing in the low range compared to other speakers of its size. However, if you place less emphasis on super strong bass, the performance of the loudspeaker will suffice completely – but it will not overdrive in the bass range, which other loudspeakers tend to do. Smaller speakers, such as the Xiaomi Soundbox 2, are also far superior in bass.