0 Kommentare March 7, 2021 by Maike
Hey, guys! Just a heads up: The linked offer is already a bit older and the price of the gadget might have changed or it might not be available anymore.

After several burnt frozen pizzas I can tell you, an egg timer is still more than practical. The whole thing also works with a smartphone, but it’s better used for watching Netflix on the side. How handy if there is a fancy magnetic egg timer from Baseus, which is not stuck in the 20th century in terms of design. 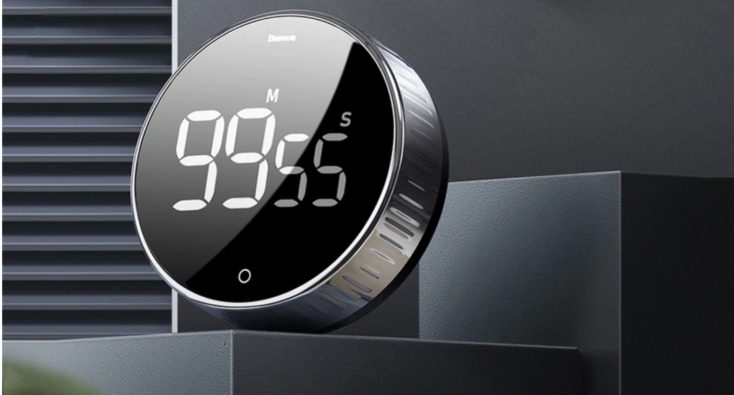 Anyone can be boring: The magnetic egg timer with display

If you are still looking for a chic accessory for your kitchen, you should take a closer look at the Baseus egg timer. On the front side there is a large LED display, which does not have a touchscreen. That would probably be too susceptible, as the device has to survive in the kitchen, too. Instead, the gadget is operated over the edge, which can be turned to set the appropriate time.

On the one hand you can classically set a time, which then expires. It works in five-second increments, up to 99 minutes, so you can set the time pretty accurately. At the end an alarm will go off and you can choose between three different volumes. You can either leave it silent (60 – 70 db), or at normal volume (80 – 90 db).

If you only want to use the clock as a stopwatch, you can also do that. If the clock is set to zero seconds, you can also activate a simple stopwatch with a switch. Surely only a little thing, but nevertheless quite nice.

The watch is powered by three AAA batteries, which probably everyone has in his household. Unfortunately they are not included in the scope of delivery. The gadget is made of ABS plastic and weighs only 90 grams without batteries. The magnet on the back is also very practical, so you can hang the egg timer anywhere.

The Baseus model measures 7.8 x 7.8 x 27.5 cm. Apart from cooking, the device can also be used for taking time during presentations, sports exercises and the like, although this is not a unique selling point of this egg timer.

Baseues didn’t reinvent the wheel with the magnetic egg timer, but for under $10 you get a cool gadget. Of course you can also get it for much less, so you can get a simple model for about one dollar. Which model you prefer remains your business – but at least the design is convincing, isn’t it?