2 Kommentare December 23, 2019 by Maike
Hey, guys! Just a heads up: The linked offer is already a bit older and the price of the gadget might have changed or it might not be available anymore.

Blackview almost resembles Xiaomi in its highly clocked release rhythm. Thus, the manufacturer surprises us towards the end of the year with the Blackview BV9900, which also puts a lot of emphasis on the camera.

Technical data of the Blackview BV9900

You notice immediately that the BV9900 is an outdoor smartphone. Even though they now also carry other, “normal” models, their outdoor design is very concise. The four corners aren’t really rounded, but simply bent at a 45° angle. The frame contains a 5.84 inch display with a 2280 x 1080p Full HD+ resolution. The front camera is hidden in a waterdrop notch at the top of the screen. The display diagonal is relatively small, but due to the robust design, it’s still not exactly a compact format. 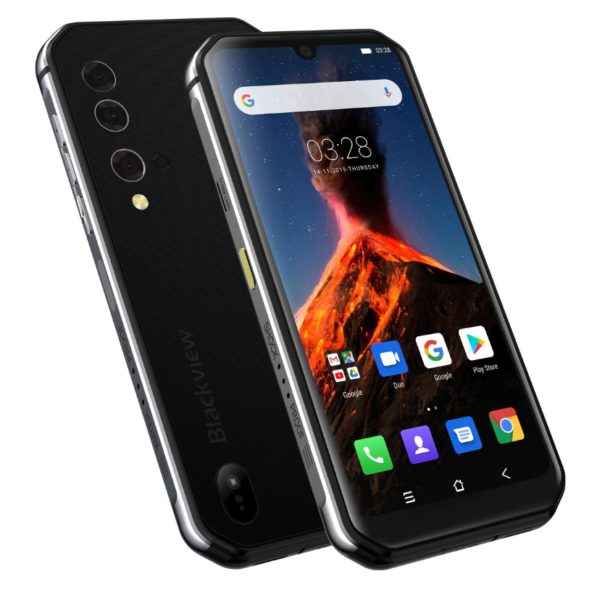 On the back side, we can expect more understatement, even if the quad camera certainly catches the eye. There are not only four sensors in the upper right corner. At first glance you think there is also a camera sensor in the lower left corner. This is obviously a heart rate monitor, however, for whatever reason it is integrated. Next to it is the Blackview logo. 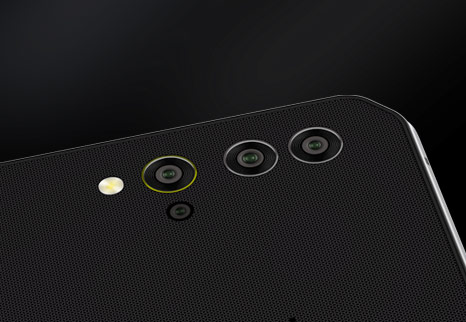 As it should be for an outdoor smartphone, the Blackview BV9900 is also protected according to the respective classifications. It is protected against dust and water according to the IP68 & IP69K standard and even offers an IceMode. Even though we will probably never be able to test it, we have to believe Blackview that the BV9900 can still be used at -30°C. However, only a few functions are then available.

That the smartphone is Blackview’s top smartphone can be seen from the CPU used. The MediaTek Helio P90 chip is MediaTek’s most powerful chip in the P-series. In addition, there is even 8 GB LPDDR4X memory and 256 GB fast UFS 2.1 mass storage. So the BV9900 offers enough memory that can actually be expanded. The UFS 2.1 memory is much faster than the eMMC memory, which is still used in China smartphones, but there is also the even faster UFS 3.0 memory.

We have already mentioned the quad camera on the back, but it deserves special attention. After all, Blackview uses a 48 MP Sony sensor here, so most likely the Sony IMX586, which also sits in Xiaomi’s Mi 9T Pro. There is also a 16 megapixel ultra-wide angle camera with a 120° shooting angle, a 2 megapixel macro camera and a 5 megapixel depth sensor for portrait shots. The hardware setup is thus somewhat above average, but Blackview was able to surprise us in the image optimization with their software in the processing, e.g. in the BV9000 Pro. So we are curious. 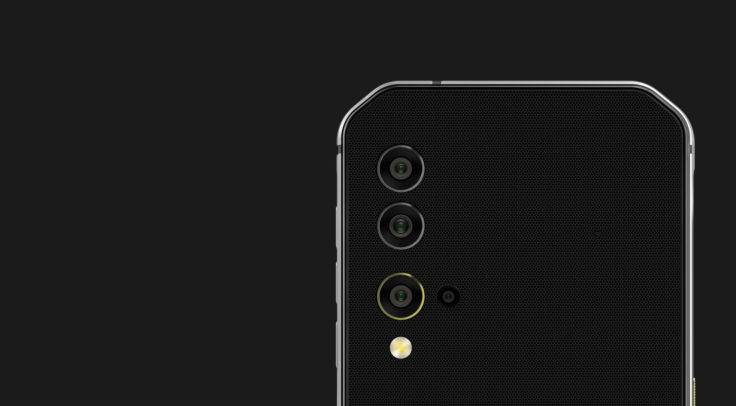 Power is provided by a 4,380 mAh battery, which is somewhat below average for such a robust smartphone. Even a Redmi Note 8 Pro offers a higher capacity. This supports 18W wired charging as well as 10W wireless charging. Even though I initially thought that Qi charging would be unnecessary in an outdoor smartphone, it probably makes almost the most sense there. After all, this is how you have to open the USB port shutter. The Blackview BV 9900 also offers global LTE bands, as well as NFC and runs on a multilingual Android 9 with pre-installed Google services.

The Blackview BV9900 is not quite as hellebore as the in-house BV9800 Pro with thermal imaging camera and focuses on a larger target group. In return, there is a strong processor, outdoor qualities as well as NFC and Qi charging. But at the moment the mobile phone still costs almost $500, which is clearly too expensive in our eyes. Of course, the target group is much smaller, so the price increases. Nevertheless, you can get a Xiaomi Mi 9T Pro for less money, which is even more powerful. We haven’t tested an outdoor smartphone for a long time, would the BV9900 be a good test device again?