2 Kommentare May 29, 2021 by Maike
Hey, guys! Just a heads up: The linked offer is already a bit older and the price of the gadget might have changed or it might not be available anymore.

By now, I’ve taken my fan out of the basement again. Could be that you need him soon. While I paid considerably more back then, the BW-FUN1 has since become cheaper and cheaper. I am still satisfied and can only recommend it. Unfortunately, Banggood and the other stores no longer carry the fan, but have some successor models or alternatives in the range.

A fan that is not only made for the desk. In this hot season of the year, it is almost impossible to do without a fan. Even better is one that is also versatile. The BlitzWolf BW-FUN1 can be folded up to the size of a medium-sized Tupper container and is height-adjustable thanks to its telescopic rod. 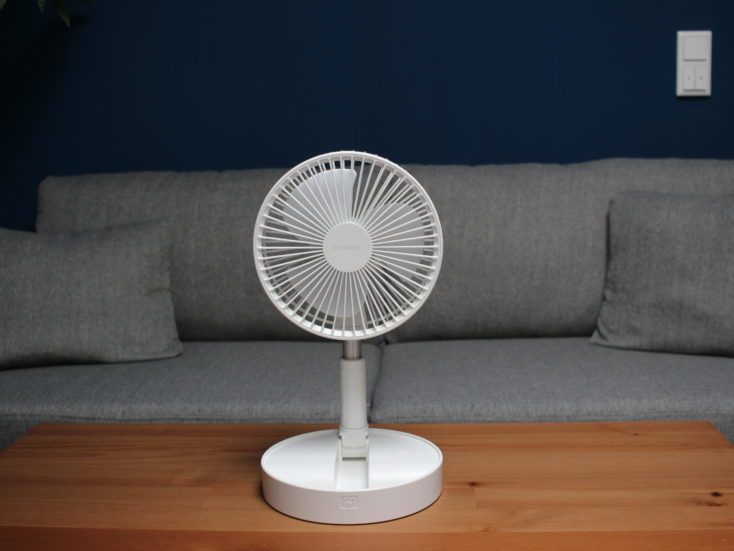 The obvious first: The fan is completely white and made of plastic. The only exception is the telescopic rod, which is made of light aluminium. The only imprint is the BlitzWolf lettering in the middle as well as some technical data and the CE marking on the underside.

There are also three rubber surfaces here (below), which prevent the fan from slipping. On the side there is also the Micro-USB connector for charging the battery. We’re a bit disappointed that it’s not a USB-C. Well, it’s all right. A 1.50 m long USB cable is included.

When folded up, the fan measures just 9.25 cm in height, the diameter is 19.7 cm. Although it is a good one meter tall when fully unfolded, it fits into the small cardboard box.

Basically everything feels solid and high quality. Only the pole with its various elements could show signs of wear after prolonged use. Even if this is the case, the fan would probably have to be in use for months before they occur. 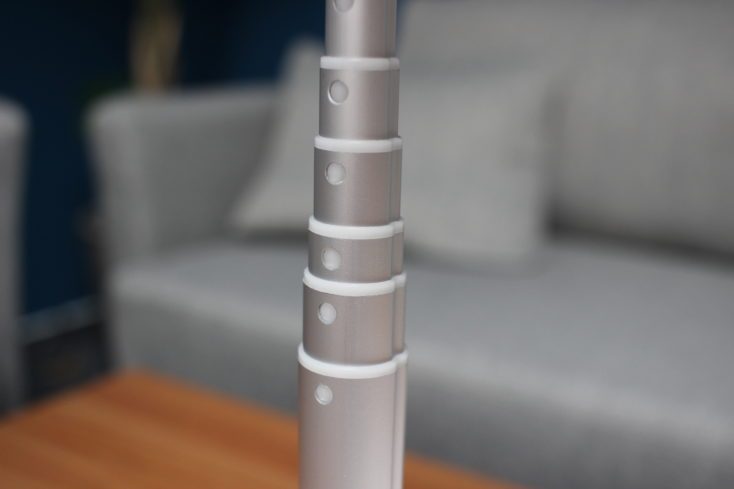 The cover of the rotor can be easily removed by turning it counterclockwise to clean the inside more easily. 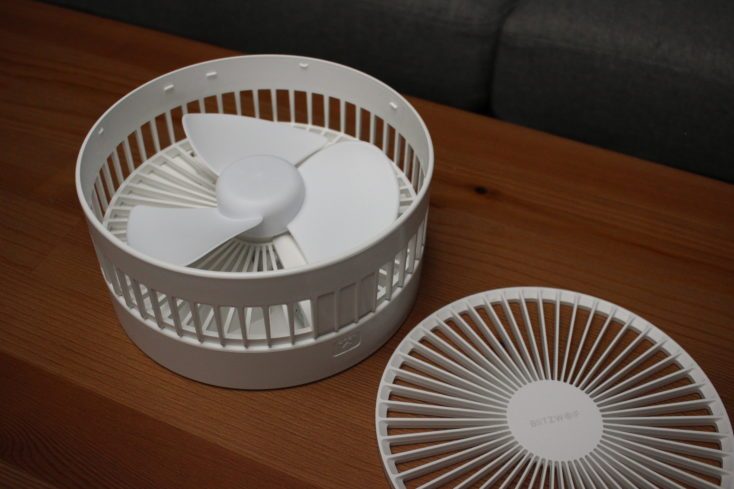 Folding out is done in a few easy steps. On the side with the imprint “OPEN” the fan can be opened and erected. The holding bar can also be fixed so that it cannot be folded in again. 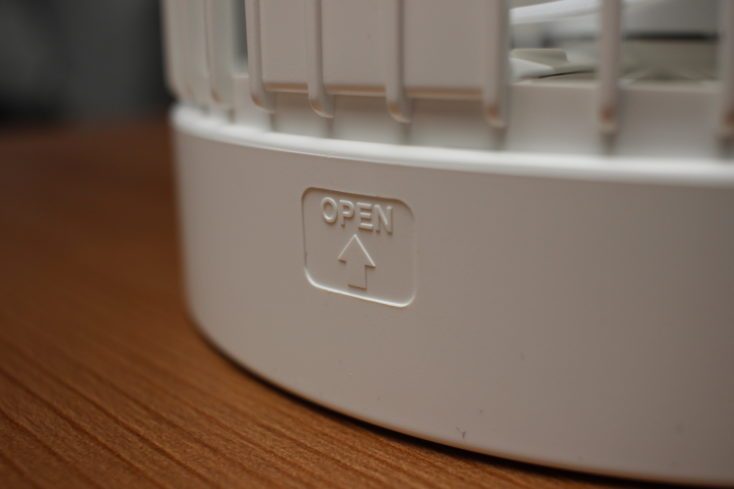 Now the “head” of the fan is raised and the desired height of the rod can be adjusted. The telescopic rod can easily be pulled apart and compressed again. “Simple” is relative, because you need some power.

On the lowest setting the BW-FUN1 is about 35 cm high and fits loosely on the table or the windowsill. The maximum height is 97.4 cm, so you can also place the fan on the floor. 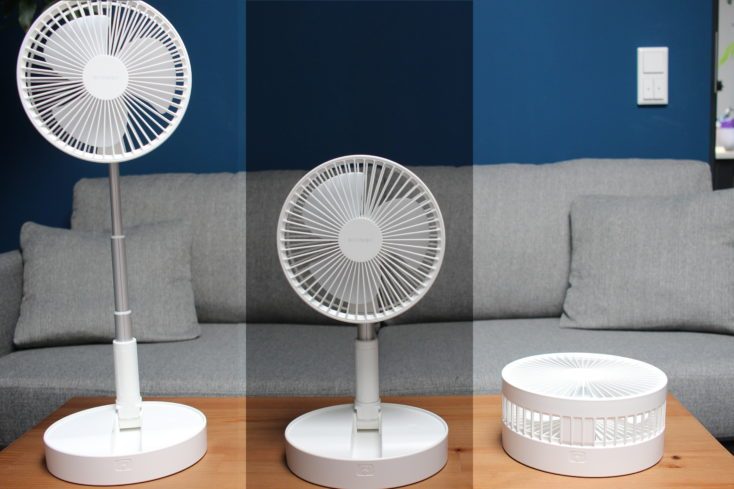 By the way, you can’t use it completely packed up. It can be switched on, but since the back of the rotor is then covered, it does not generate any wind. BlitzWolf itself calls the fan a “3-in-1 fan”, but in our opinion this is not entirely true. There are a total of four settings for the wind; height settings are either two (maximum and minimum) or infinite, if you want to evaluate the stepless setting that way.

The head of the fan can be tilted very freely by about 200°. You can’t turn it sideways.

The BW-FUN1 is operated completely via a single key. This is located on the stand and becomes visible when the fan is unfolded. A simple push of a button “activates” the unit; if you press the button again within about three seconds, you can switch between the different modes. One of the four LEDs above the button indicates which mode is currently active. 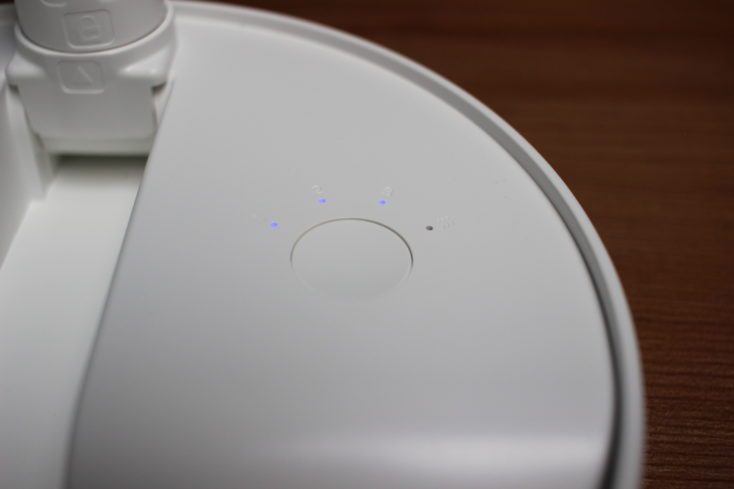 During operation, the LEDs change to indicate the battery status after three seconds. Depending on the remaining charge of the battery, one, two, three or all four LEDs light up.

The fourth stage is supposed to simulate wind and changes between different speeds. Every three to four seconds, the fan switches off briefly so that it emits short bursts of air again and again. It doesn’t feel really natural, but it provides an alternative to constant airflow.

Unfortunately the fan already vibrates noticeably from the first stage. Depending on the base, this effect may be intensified. On a not completely fixed table with wooden top you can clearly see the vibrations of the fan head, on carpet it is a bit better.

The vibration actually decreases with increasing strength, and is clearly lower on the second and third stage. On the other hand, the noise level of the motor increases. The third stage in particular is no longer suitable for a quiet working atmosphere – for example in the office. BlitzWolf itself speaks of 30 – 40 dB.

In a louder environment or outdoors, however, the volume is not a problem and we did not find it disturbing.

In addition to portability, the built-in battery is probably the biggest advantage of the fan. The capacity is 7,200 mAh. As already mentioned, it is charged using a micro USB cable and 5V at 2A, i.e. an ordinary smartphone charging adapter. A complete charging process takes about five hours.

BlitzWolf itself also provides information about the battery life:

We have not been able to check the data 100%, but roughly they do. If you use the fan only at the lowest level (which is sometimes enough) you can use it for 20 hours. As soon as you add the other modes, the running time decreases considerably; however, you can get more than ten hours if you change the modes more often.

The battery makes it possible to use the BW-FUN1 on the go. Since it fits loosely into a bag when folded up, you can build up a comparatively powerful fan at any time if the hand fan is not enough for you or you would like to have your hands free. Unpack the fan at the stop? In the train? In the park or in the sultry waiting room? Those who are not ashamed (and perhaps show a little consideration for other people) can theoretically enjoy a breath of fresh air everywhere.

The fan is definitely interesting due to its compact format and flexibility of use. The only real weakness is the slightly too high volume. If you are really only looking for a fan for use in the home (and only at one, fixed place), other models might be better suited.

But if you are looking for a flexible fan, which can be installed in any room and also outdoors, then the BW-FUN1 is a good choice. With less than $30 the price is more than fair. For comparison: the battery fan from Xiaomi (which, to be fair, has a little more power and is much more robust) costs more than $100.