0 Kommentare June 26, 2021by Jens
Hey, guys! Just a heads up: The linked offer is already a bit older and the price of the gadget might have changed or it might not be available anymore.

The standing fan BW-F1 from BlitzWolf works wirelessly, is quiet and has several modes. Thanks to the folding mechanism, it can be stored in a space-saving way. We have tried the fan ourselves in summer temperatures. For the hot days a great gadge 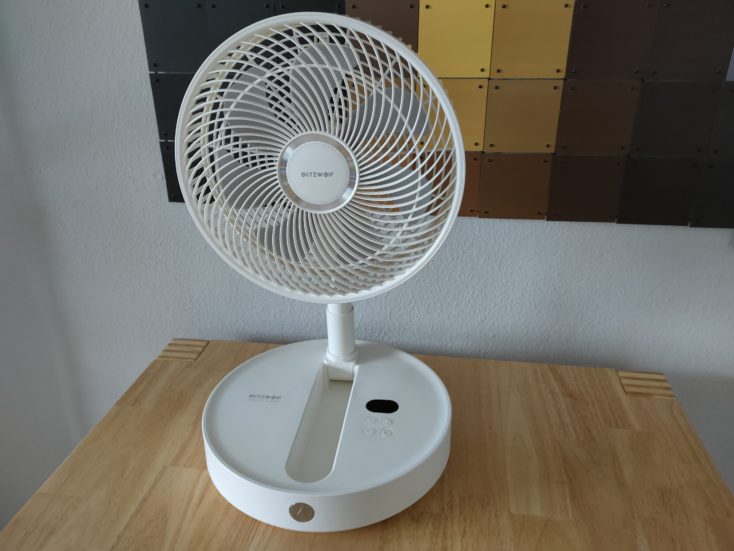 I bought the BW-FUN1 from Blitzwolf in 2018. By way of explanation, this is just as much a foldable fan as the BW-F1, just one size smaller. You could also call it the “predecessor”, as far as I know the BW-FUN1 was in fact the first model of this type that Blitzwolf sold.

It’s still not entirely clear how Blitzwolf (part of Banggood, by the way) actually gets its products and how they select them. After selling mainly charging cables and socket adapters in the beginning, the Chinese brand with the German-sounding name sells everything from selfie sticks to kitchen appliances, from PC monitors to headphones. It is not uncommon for the devices to disappear from the market after a few months; the BW-FUN1 mentioned above is no longer available today. 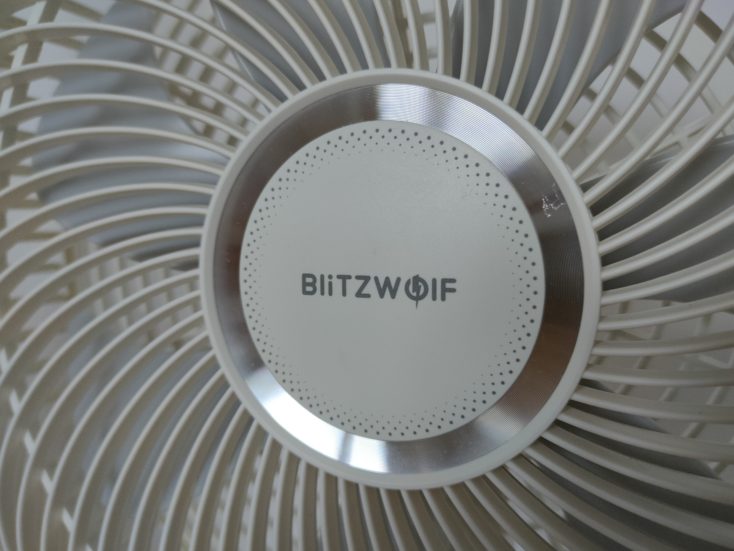 But you still do something right, at least okay, sometimes even pretty good. The small fan also does its job for me to this day, and does it very well. It’s not used on so many days of the year, but when it’s 30°C again, the fan is as good as it was at the beginning, even after three years, and has been stored away to save space in the meantime. This also gives hope for the BW-F1.

But about the BW-F1: The fan comes padded in foam in a typical BlitzWolf box. Unusual here is already the shape. No long cardboard box like other fans, but a square box. Because the BW-F1 does not need much space, but can simply be folded and so it arrives like that already in the packaging. 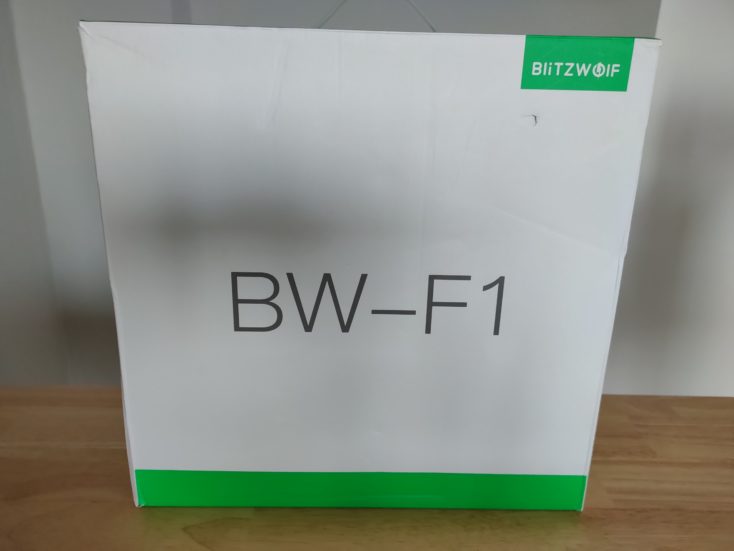 Besides that, you will find a short manual in several languages (including German), a small remote control and a USB-C cable of 1.5 meters. The remote control looks rather cheap, but it serves its purpose. The cable could be a bit longer since you have to be very close to a power outlet, and there is no power plug included. However, most people probably have a USB adapter for the socket at home. Ideally, 15 watts (5V/3A) are needed.

Setting up the fan is not a science. The head is simply erected and the telescopic rod extended to the desired height. At the bottom, at the “foot” of the fan, the rod can be screwed tight so that it does not tip over. The head can then theoretically also be tilted, but that’s it.

The variable height allows different uses. If you do not extend the bar at all, for example, the BW-F1 is only 50 cm/20 inches high and you can also place it comfortably on the table or dresser. When fully extended, it is then 1.06 m/42 inches high.

As with many other fans, there are different modes here. Once a “normal” mode with constant wind strength, but next to it also a “nature mode“, which varies the strength a bit and is supposed to simulate natural wind. In both cases, 9 levels can be set. The lowest level is a barely perceptible breeze that only moves the air in the room a bit, but level 9 generates a lot of wind. In my opinion, you almost don’t need the maximum wind strength. I found level 4 sufficient even on the hot days.

Unlike the small BW-FUN1, the BW-F1 is also rotatable. However, it is not the head that rotates, but the complete fan around the base. The rotation takes place thereby in an angle of approximately 90°. 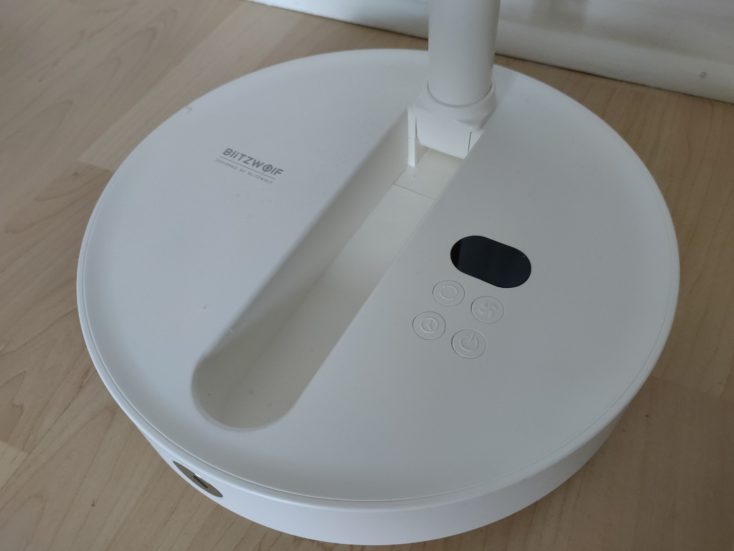 It is possible that the fan makes a clicking noise during operation. In this case the rotor is probably not tightened. You can then simply remove the cover and tighten the rotor. Markings on the side indicate the direction of rotation. Correctly established, there should be no more disturbing noises and nothing should come loose so quickly.

Overall, the fan’s noise level is pleasantly low. The manufacturer states under 25 dB. Always difficult to measure that exactly, and also dependent on the set level. In any case, it’s not loud, and you can run it at low speed at night without it disturbing your sleep.

Operation via buttons or remote control

A small display and four buttons for operation are located at the bottom of the fan’s base. However, since they are not always easy to reach – especially if the fan is located in the corner of the room – there is also a remote control. 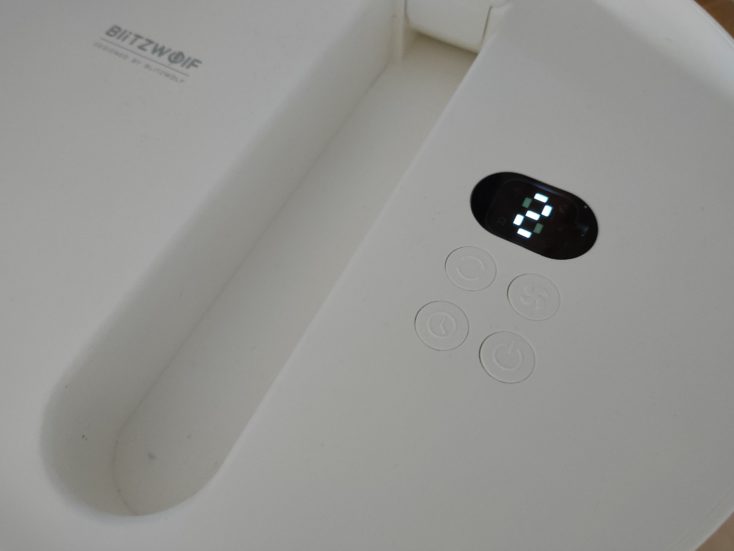 There is, in addition to the power button that turns the unit on, a button for adjusting the wind strength, turning the rotation on and off, and a timer. Here you can set the fan to turn itself off after a certain time (1-8 hours). 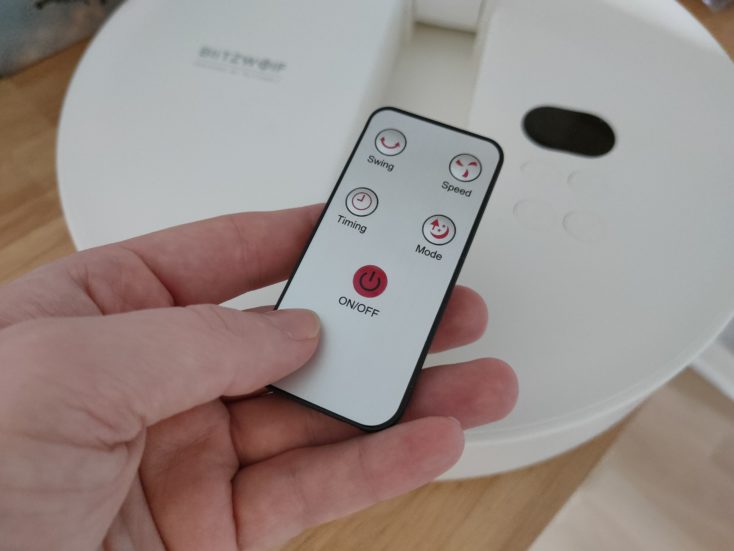 The remote control has one more button, this activates the sleep mode (also called nature mode in the manual). On the fan itself, you activate it by holding down the wind speed button.

The remote control could also be omitted in my opinion. Yes, it can be quite handy, depending on where the fan is located. However, you don’t play around with the settings that often, and for me it’s just another remote control that I simply misplace when in doubt and then have to look for when I need it anyway.

How long does the battery last?

What makes the fan special, besides the folding mechanism, is its battery. A power outlet is not always necessary for operation, and if necessary, the BW-F1 can be quickly moved to the other corner of the room, next door or anywhere else. No cable, no problem. I have also used the BW-FUN1 in the summer in the train on the way home.

The manufacturer specifies a runtime of 2 to 37 hours. Not a very helpful value, and of course depending on the wind strength. I could not now completely empty the battery at every level (and with turned on and off) – whether 37 hours are really possible at the lowest level in the style stand, I can not say. However, I managed 10 hours, and a cable can still be connected in case of need. However, it can take a few hours to fully charge the battery.

Assessment – The ideal fan for me

As with the predecessor, I have little to complain about. I just like the fact that you can fold the BW-F1 up like this, because most of the year you don’t need it, and then you don’t want to have to store a bulky fan in the apartment or even just the storage room or basement. Compared to the smaller BW-FUN1, other functions such as sleep mode and rotation have now been added here. All of that combined with the fact that you can run it wirelessly on battery power makes it almost perfect for me.

Sure, it’s not smart. If you’d like it to be integrated into your smart home, you’ll have to look elsewhere. Here, for example, there is the Mi Smart Fan 2 from Xiaomi. Those who can do without the folding or the battery also do not have to spend the money and get away cheaper. However, these features are definitely worth the price for me.