3 Kommentare April 3, 2019by Tim
Hey, guys! Just a heads up: The linked offer is already a bit older and the price of the gadget might have changed or it might not be available anymore.

In the meantime, more and more models with laser space measurement and corresponding mapping are coming onto the market, now another manufacturer with a promising model is coming up. The BlitzWolf BW-VC1 vacuum robot has very strong values on the technical data sheet – and costs considerably less than the RoboRock S50 and even less than the 360 S6. I wonder if everything is going right? 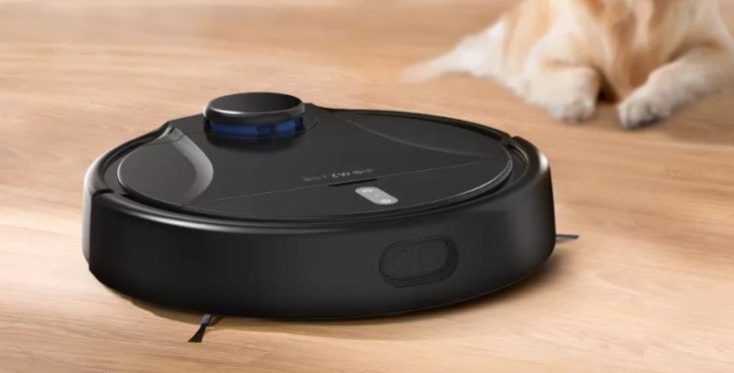 Direct comparison is the basis for the following conclusions: In terms of suction power and working time, the BW-VC1 seems to leave the RoboRock S50 behind ( this has yet to be proven, of course), but it has fewer functions than the current top model. BlitzWolf even has the audacity to make its own comparison table:

Courageous, courageous. In fact, the BW-VC1 (which probably stands for BlitzWolf VaccumCleaner1) is not the manufacturer’s first model, we already knew the BW-XRC600 (ages ago). This turned out to be a mass-produced model, it also appeared under the name GBlife 680G and as LIDL’s own brand. A typical product that costs different amounts under different branding.

On the upper side is the laser distance sensor (LDS), with which the robot scans the premises and creates a virtual map, which is then displayed in the app “Blitz Clean”. Virtual walls and no-go zones can be drawn on it. No-Go zones are areas that the robot does not travel through. If the BW-VC1 encounters a virtual wall, it immediately turns around and does not cross this line.

Furthermore, the BlitzWolf divides the rooms into different areas, as we know it from the DEEBOT Ozmo 930. This allows the robot to set specific working times for a specific room (living room 9:30 a.m., kitchen 13:00 p.m., for example). With one battery charge (5200 mAh), the BlitzWolf can work a full 3 hours, making the robot definitely suitable for larger rooms (280 m² according to the manufacturer). Practical: The BlitzWolf detects when the 0.38 l small dust chamber is full and sends a push notification via the app to its owner.

Of course, it should also be remembered that vacuum robots can only be connected to 2.4 GHz networks up to now, so you have to change your WLAN settings accordingly. Newer modems are capable of operating both 2.4 GHz and 5 GHz.

On paper, the BW-VC1 does a good job, even though voice control (Alexa control is still being developed), wipe function and carpet recognition are apparently missing. From my point of view it is bearable, if the price is lower. A blatant (and at the same time questionable) value are the 2200 pa suction power, which make even the RoboRock T6 just announced look jealous, if these apply in practice.

You can choose between four different suction levels: Silent (low operating noise), Standard, Powerful (almost max.) and Full speed (max.). On one of these levels, the robot reaches an operating volume of 65 dB, on which is not clear. This is an average value for a household helper. Of course, the usual vacuum robot features such as fall sensors and the autonomous retrieval of the charging station are also included.

The competition for the current top dog Xiaomi is getting bigger and bigger: More and more models with laser room measurement not only provide more competition, but also more confusion on the market. According to the product description, the BlitzWolf BW-VC1 has a lot to offer: high suction power, long working hours, many functions in the app and above all a price below $300. But it’s precisely the latter that makes people sceptical; after all, the Chinese don’t always take the truth of their product descriptions so seriously. But if the technical data are correct in practice, we may be dealing with a good alternative to the RoboRock S50.

What do you think: Shall we get a test model and check out the data mentioned here?