0 Kommentare April 15, 2019by Alex
Hey, guys! Just a heads up: The linked offer is already a bit older and the price of the gadget might have changed or it might not be available anymore.

After Thorben already found his personal gadget of the year with the electric skateboard Acton X1, the BlitzWolf KS1 Karaoke Box is my hot candidate for this title. I’m a horrible singer, but the Karaoke Box is just fun! 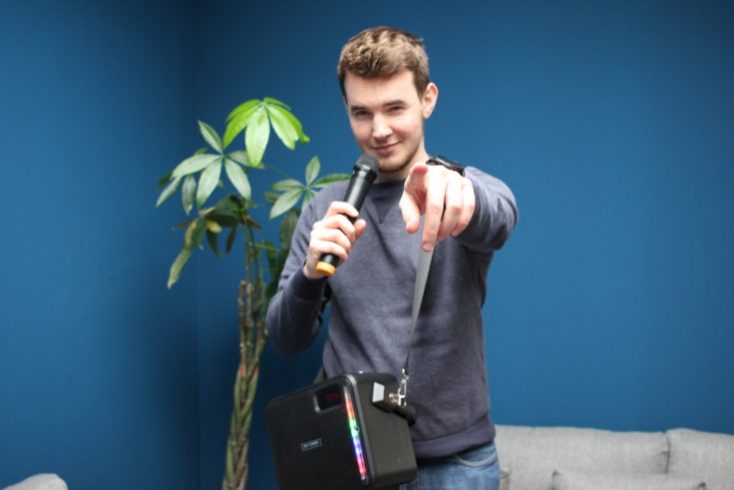 BlitzWolf is not to be lumped and delivers a carrying strap (67-120cm), a small remote control and an 80 cm long charging cable in addition to the box and the wireless microphone. Also included is a manual in six languages, including English and German. 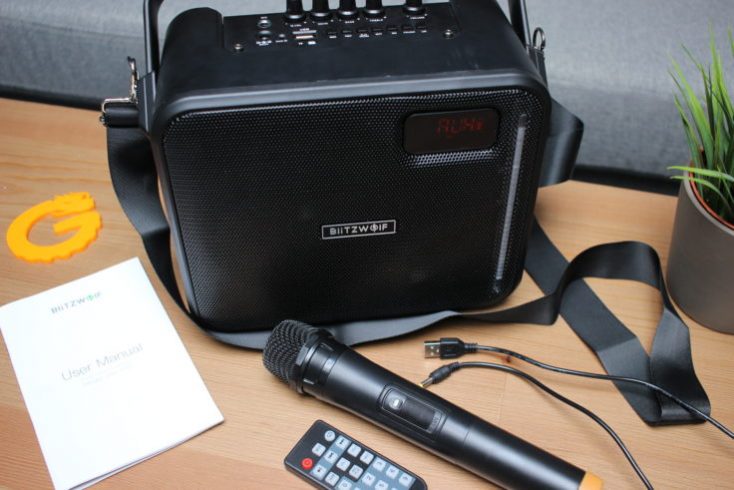 Processing & Design of the Karaoke Box

The loudspeaker consists completely of plastic except for the metal grille at the front and a few screws. Nevertheless, it feels quite valuable, also due to its weight of 2.4 kilograms. Apart from the movable eyelet for the supplied belt, nothing wobbles or sits loosely. The handle is stable and the knobs and buttons are also easy to operate. All in all, the box is solidly crafted, even if a little more metal would certainly not have hurt here and there. 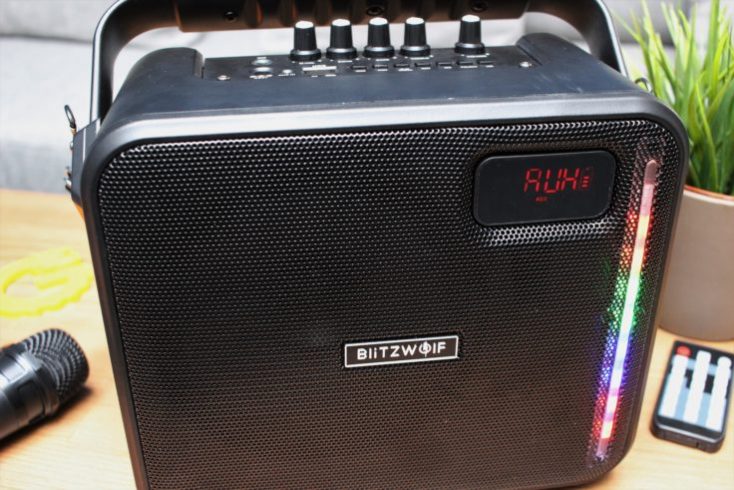 The design of the box is very simple and, except for the knobs, the nameplate and the LED strip, it is completely black. According to BlitzWolf, these LEDs should also light up to the beat of the music, but they only follow a pattern of fixed animations. A really cool effect like with the Soundcore Flare is unfortunately not possible. Therefore one can actually do without the use of the LEDs, in order to save some battery.

To the left of the LED strip there is also a small display in red that shows the current mode of the box and how full the battery is.

The Blitzwolf BW-KS1 Karaoke Box is equipped with a 40 mm tweeter and a 140 mm midrange and bass speaker. Despite the relatively large woofer, the speaker can’t score with a rich bass. The same applies to the tweeter, which doesn’t sound particularly detailed. 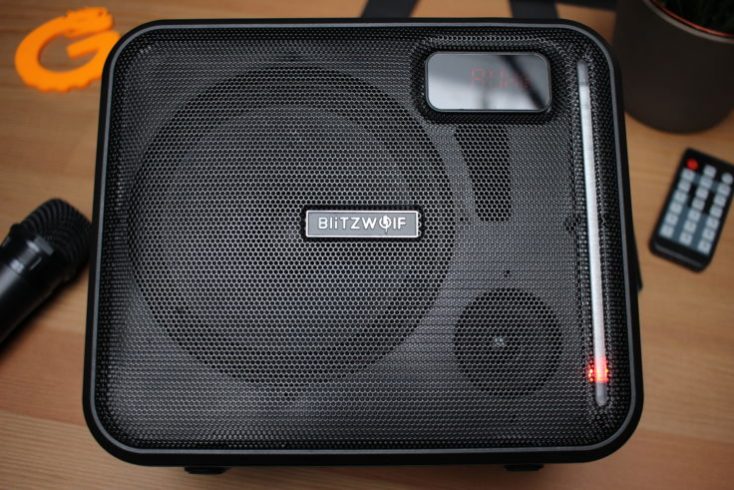 Overall, the sound is fixed to the midrange. Voices are reproduced undistorted and that’s what it’s all about with a karaoke speaker. In addition, the overall volume of the loudspeaker is surprisingly high, which is certainly an advantage for a party where it can get louder. The maximum volume is 113 decibels, measured from a distance of 30 cm. I can’t recommend the Blitzwolf BW-KS1 as a Bluetooth loudspeaker with which you primarily want to listen to music. As a small karaoke speaker in this price segment it fulfills its purpose perfectly enough.

Like most karaoke boxes, the KS1 also offers quite a few functions in a compact format. You can play music in four or five different ways. Smartphones can be connected via Bluetooth 4.1 or Aux cable. Alternatively, you can also transfer your music to a USB stick or a microSD card and connect it. But here you have to say that navigation through folders and songs on the storage media is more of a guessing game, as the display only shows the title number and the playback time. 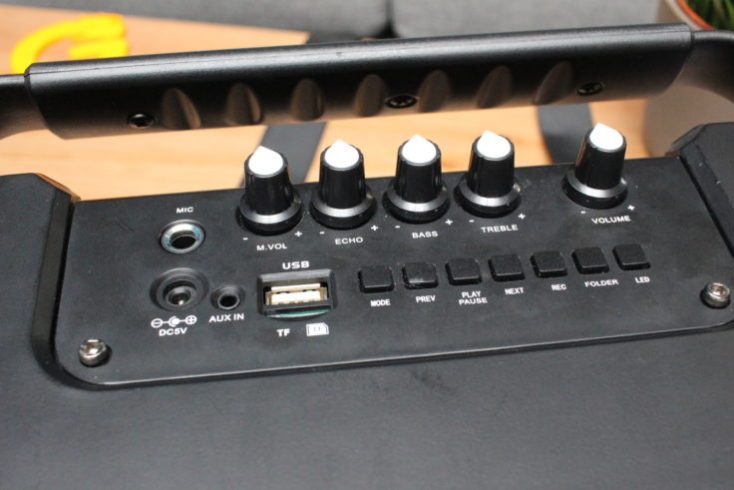 So USB and SD cards are rather unsuitable for playing music, but essential if you want to capture your angelic voice for posterity. According to BlitzWolf, both modes support the recording function. Unfortunately, this only worked with the USB stick in the test, the box didn’t want to store our recordings on microSD cards. In addition, you can only record your voice via microphone and not play or record music at the same time. So our cover version of Robbie Williams “Angels” still has to wait a bit ? . In theory there is also the possibility to listen to the radio with the speaker. But the reception was so bad even for the local radio station that you can ignore the function. 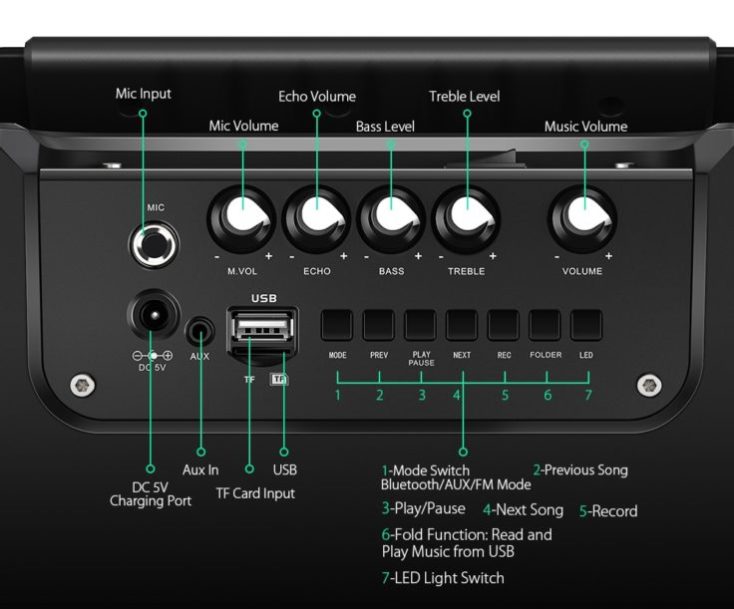 In addition, there is a 6.35 mm jack socket for connecting a wired microphone, the charging connector and the on/off switch on the rear. The small supplied remote control (91 x 41 x 11 mm) takes over the functions of the buttons if required, but the knobs are not replaced. 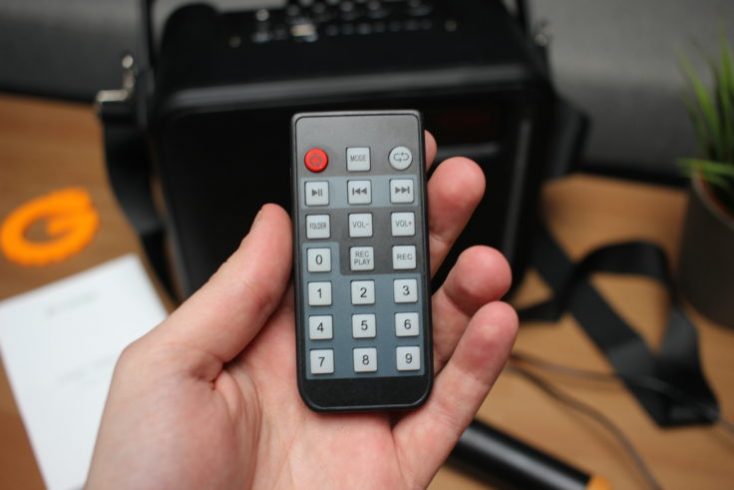 The supplied microphone is 24.2 cm long and has a diameter of 3.3 cm to 4.8 cm. It is powered by two AA batteries, which are not included. The radio connection is established via the 268.85 MHz frequency and is surprisingly stable. The specified 10 meters distance between loudspeaker and microphone are bridged loosely and even 15 meters are in direct visual contact inside. 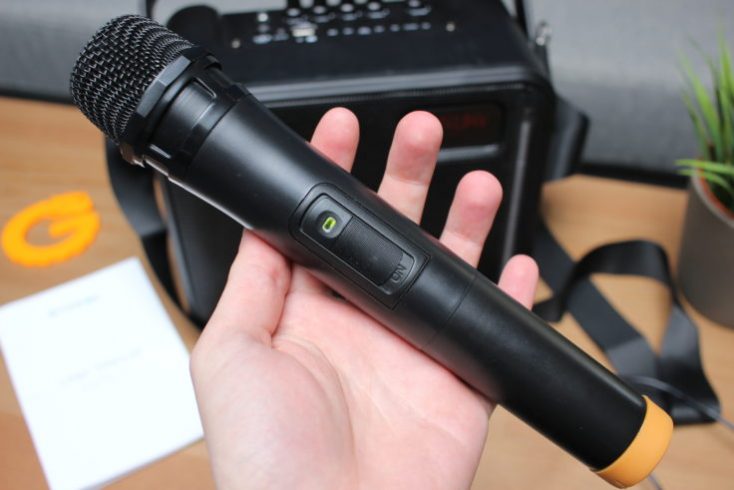 The quality of the microphone is quite solid for the price. Of course it is completely made of plastic except for the metal grid at the top, but it offers a sound quality that is completely sufficient for karaoke and above all a very fast transmission without noticeable latency. So you can’t put your crooked and wrong vocals on the microphone.

The battery capacity of the karaoke box amounts to 4,500 mAh and is thus below that of many a smartphone. Fortunately, the box only has to play music and no mobile games and therefore has a runtime of four hours at half the volume. BlitzWolf indicates four to five hours and is therefore just as realistic. It then becomes unrealistic at the specified 4 hours charging time. This was four hours and 30 minutes with a 12 watt charger. Fortunately, the box can also be operated with a constant power supply. At full volume the box should last two hours, but I couldn’t do that to my neighbours or colleagues. 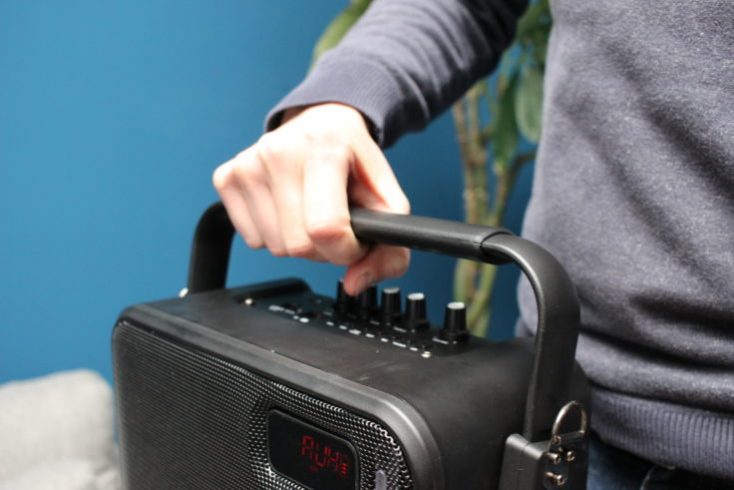 Conclusion: Why is the box fun?

Karaoke is a social phenomenon, especially in China, where this box comes from. Instead of going to a bar in the evening, you go to one of the numerous “K-TVs”, where you sing karaoke with some friends in a private atmosphere. This isn’t nearly as common with us. (And the times when a Playstation with “SingStar” was set up at every party are also somehow over.)

To be honest, I never thought about a karaoke box before, maybe that’s why I have so much fun with it. So far we/ I have annoyed our colleagues with it and delivered a few Grammy-suspicious performances this weekend. Thanks to the integrated battery, the handle and the carrying strap, the box is also very portable and could be used at garden parties.

Of course you can get such boxes also at Amazon, but there is often only a wired microphone or they cost far more than $80 with wireless microphone. Here you simply get a good overall package with which you can start right away and which at least has given us in the editorial office a lot of pleasure. Are we or I alone with the enthusiasm or can you relate to it?