0 Kommentare November 26, 2021by Thorben
Hey, guys! Just a heads up: The linked offer is already a bit older and the price of the gadget might have changed or it might not be available anymore.

If you’re not only taking a tent and sleeping bag to a camping trip, but also various gadgets like smartphones or tablets, you need more power than a powerbank can provide. That’s where the Bluetti EB55 Powerstation comes into play. Thanks to its 100W power and 537 Wh capacity, it acts more like a small emergency generator. 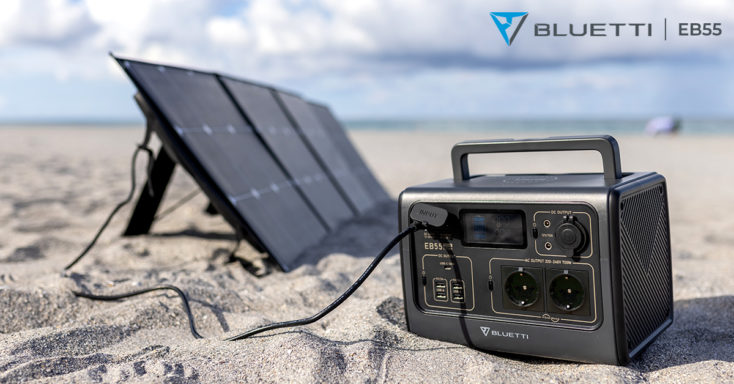 Robust design with a lot of ports

Like most powerstations, the EB55 from Bluetti looks like a block at first. With dimensions of 27.79 x 19.99 x 19.79 cm and a weight of 7.48 kg, the power station is even more portable than one would first assume. The manufacturer relies on a supposedly fire-resistant ABS material paired with polycarbonate. It is available in blue and gray, and there is a carrying handle on the top. All ports are located on the front, where the display with the remaining capacity is also hidden. However, the manufacturer also offers much bigger and more powerful power stations, if they fit in your trunk. 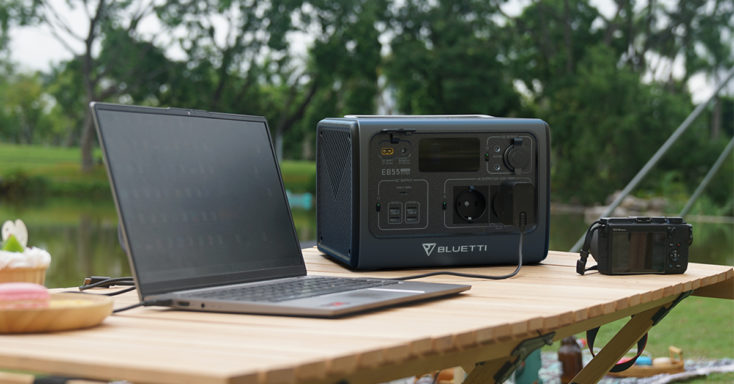 However, the capacity and performance are much more important. The manufacturer specifies 537 Wh. Converting that to mAh at a voltage of 5V results in 107,400 mAh, or 107.4 Ah. Taking the 3.7V voltage, which is often used for power banks, results in a capacity of 145,000 mAh, i.e. 145 Ah! A 16″ MacBook with just under 100 Wh battery can thus be completely charged over four times! The battery is supposed to survive over 2500 charging cycles until the battery performance shrinks to a still acceptable level of 80% of the original performance. 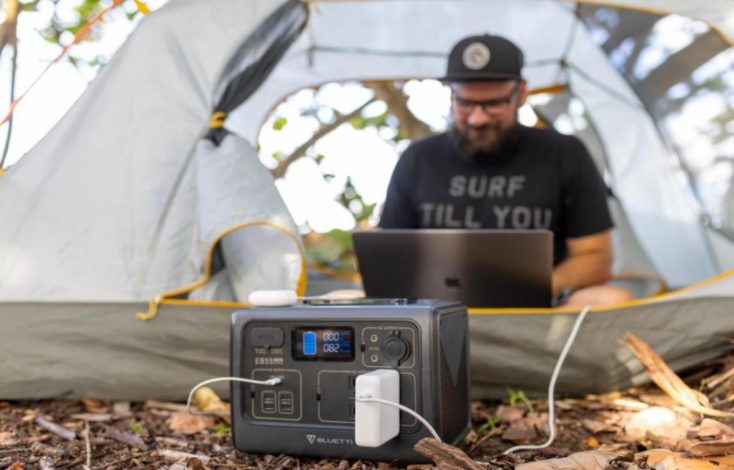 You can use one of the many ports for that. There are four USB-A ports on the front, each of which supports a maximum output of 5V/3A, i.e. 15W, and a USB-C port that even offers a maximum output of 100W and supports the Power Delivery 3.0 protocol. In addition, there is a 15W Qi charging area on the top, which allows you to wirelessly charge a OnePlus 9, for example. But that’s not all: There are two AC sockets with up to 700W power at 220-240V, as well as two DC outputs with a maximum of 120W!

How do you charge the Bluetti EB55 Powerstation?

So much capacity has to come from somewhere. Fortunately, the Bluetti EB55 Powerstation can be recharged in different ways. You can fully recharge the station with 200W in 3.5 hours via the included power adapter. On the road, it is also possible thanks to the car charger, but that takes up to six hours. If you really want to use the EB55 for camping, it might make sense to buy a 200W solar panel, since you can also recharge the battery in three to four hours. If you combine that with the power adapter, the power station is even charged in just under two hours! 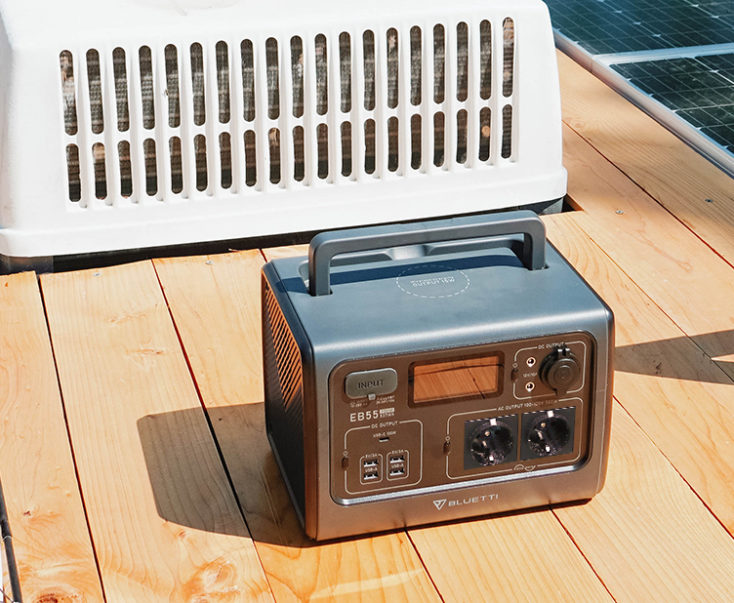 The Bluetti EB55 is still one of the manufacturer’s cheaper models, but it already delivers more than enough power in this version. The large capacity should be enough for several devices over a weekend and with 100W of power, you can easily charge a notebook completely. The ports are numerous. In contrast to the somewhat smaller model from BlitzWolf, the device does without gimmicks like a flashlight or integrated speaker, but places more emphasis on performance. Unfortunately, Bluetti charges a bit more for this, but you can still get it for the special price of $460 instead of $520.