0 Kommentare July 17, 2020by Jens
Hey, guys! Just a heads up: The linked offer is already a bit older and the price of the gadget might have changed or it might not be available anymore.

After CaDA has recently launched a number of interesting models (especially the very cool sports car with almost 4,000 parts) and I personally want to see more of the brand again, we are now looking at another model. 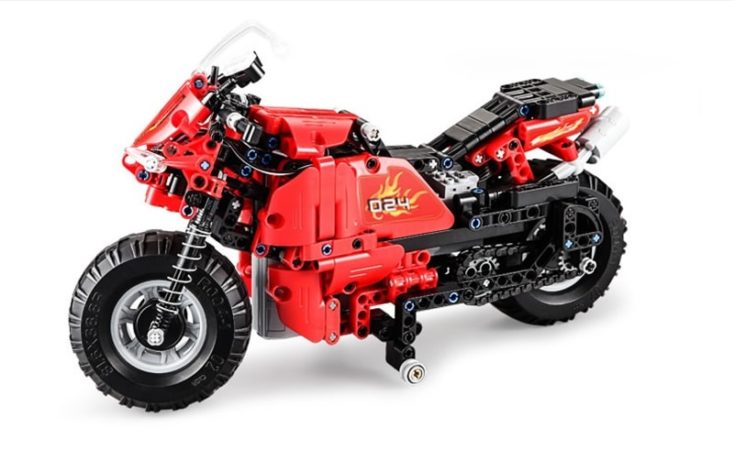 My very first CaDA model was also a motorcycle a few years ago. It was from the series of military vehicles and had a sidecar, but was also remote controlled. Since I started with it (and was already enthusiastic at that time), I have a bit of a heart for motorcycles of that brand. The CaDA C51024 is now a sports bike.

Special functions of the model are the suspension of the front wheel, the drive of the rear wheel over a chain and of course the engine. These are the usual parts, which are also used in all other motorized CaDA sets (for example in the CaDA C61006). In addition there is also the remote control, which can be equipped with a small steering wheel. Since a motorcycle of this size is difficult to balance, it needs a little trick to ride it. Therefore there are small support wheels on both sides. If you just want to put the bike on show, you can leave them off, but they are important when using it as a toy.

The engine is not the only part of the electrical system. Thanks to LEDs in the front, the bike also has lights, but only in the front. The (blue) rear lights are only transparent stones.

There are a few stickers, which you can of course also just ignore if you don’t like them. I can imagine the model without them, but that remains a matter of taste. 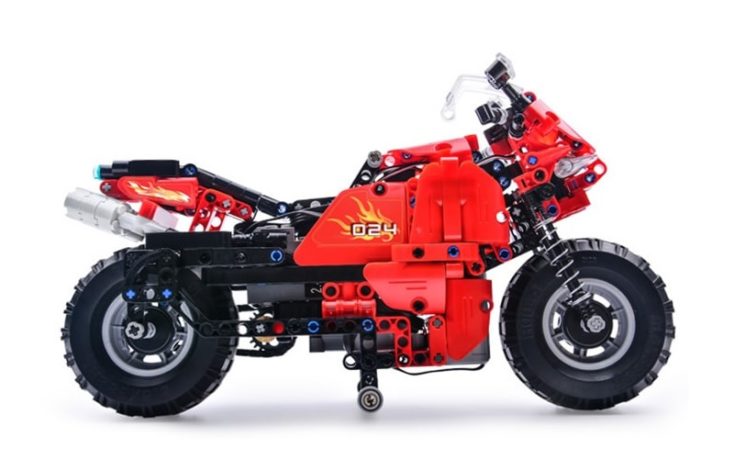 484 parts are enough to make the construction fun, but not too much to make it stressful. Experience shows that you can finish it in less than two hours if you are fast. A printed manual is of course included, but the original box is again optional. If you want to have the set as cheap as possible, you can order without this packaging, which saves the shop on shipping and makes the final price cheaper.

If you are interested in more of these building blocks, have a look at the other sets at our site, some of which we have already built.

Unlike many sports cars, the motorcycle is less an exhibit than a toy. Nevertheless, it is also a good choice for the showcase, if you just want to expand your collection with it. Which variant do you choose?