0 Kommentare October 5, 2019by Jens
Hey, guys! Just a heads up: The linked offer is already a bit older and the price of the gadget might have changed or it might not be available anymore.

The biggest kit so far! Almost 2000 single parts and with the enclosed set of motors and remote control also “remote” controllable. The CaDA kit C61006 has occupied me for hours just for the construction. My whole experience report can be found here.

The CaDA models have given us a lot of pleasure in recent times and have convinced us both in terms of construction and workmanship and quality. One model was a rifle, which can shoot foam arrows. Comparable with the C61006 is the CaDA 919 Racing-Car, which can also be equipped with an engine. 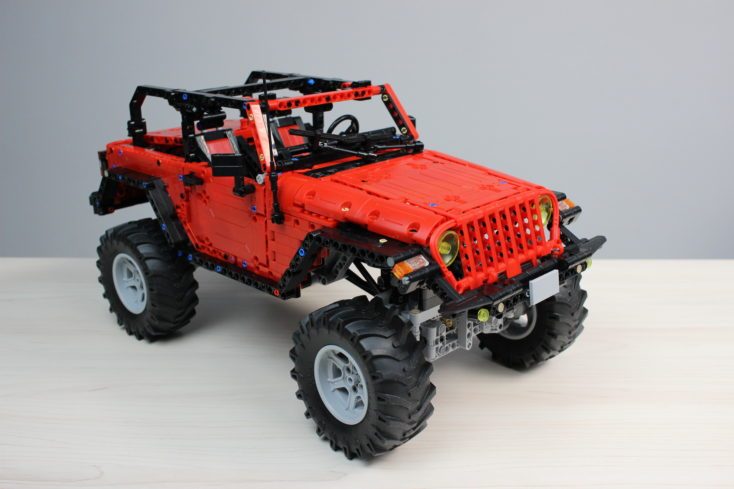 We ordered the kit from GearBest, from where the package was delivered after two weeks. I hadn’t suspected a building blocks set at all: Due to its size and weight I would have thought of a vacuum robot, some of which also arrive regularly. The carton weighs 3.8 kg and measures 48 x 38 x 15 cm – the largest we have built here so far.

The carton was undamaged, apart from a few mini dips on some edges. Printed on the model itself we find information about the number of parts, the minimum age and accessories. On the far right there is a list of the electronic parts, because the kit comes directly with battery, motors and remote control.

Even when opening, the picture is different from that of smaller models. There are not several bags loose in the box as usual. Probably because of the size there are more small boxes inside, in which the single bags are stowed. (The hint: don’t unpack the individual boxes immediately!) This provides more stability and looks really nice after opening. Generally, the quality is a bit higher here. Instead of an outer packaging and an inner part made of folded, brown cardboard, this is a two-piece box consisting of cover and underside.

The manual is no longer a thin booklet (but two not quite as thin), and has 127 pages. So you know from the start what to expect. It is nice that the stones are pre-sorted according to individual work steps. Directly on the first page it is explained that the five smaller boxes inside should be opened bit by bit. So if you want to make the assembly a bit easier, don’t unpack everything immediately, just the box necessary for the work step.

The manual is no longer a thin booklet (but two not quite as thin), and has 127 pages. So you know from the start what to expect. It is nice that the stones are pre-sorted according to individual work steps. Directly on the first page it is explained that the five smaller boxes inside should be opened bit by bit. So if you want to make the assembly a bit easier, don’t unpack everything immediately, just the box necessary for the work step. The bags are not labelled, and once unpacked it is no longer possible to determine which one was in which carton. Before I looked into the instructions, I simply unpacked all the bags and made the assembly a little more difficult for myself. If you don’t want that – follow the instructions. ?

You should also check all electronic parts before assembly. This is also indicated in the instructions. For some motors the connectors have to be in the right position. You can also check that everything is working before you set it up. With the finished model you can’t get to most of the parts anymore, and it’s hardly possible to correct something afterwards without taking everything apart again.

As always, I still tilted the stones roughly sorted into single bowls. To tilt all 1941 stones on a heap is a bit too stressful for me. Who likes to live at the limit and stands on extremes, does it of course like this. The construction time should almost double again. 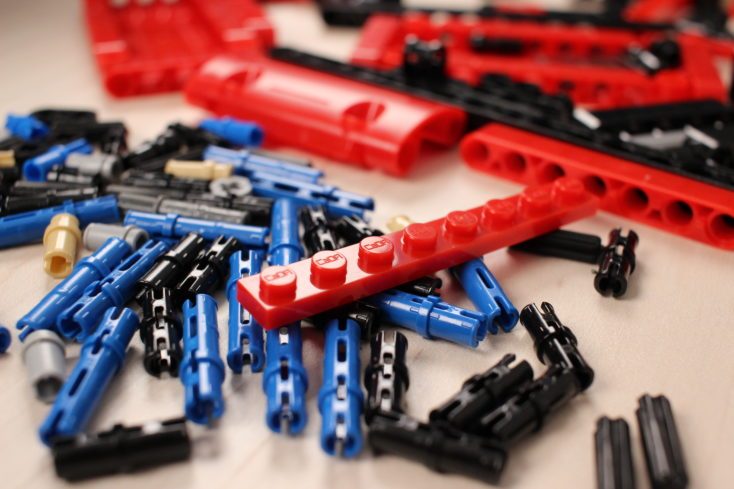 As usual from CaDA the manual is very detailed and leaves nothing to be desired. There’s nothing to say here that hasn’t been mentioned by me in many other tests. The difference is here simply the extent and the time for the construction. I sat over one week at the model, it might have been altogether about 8-9 hours. In one day it’s hard to do that if you don’t really lock yourself in on a weekend and do nothing else.

Quality of the stones

I have to criticize the workmanship a little this time. Maybe it’s only because there are so many parts and therefore more mistakes. But especially with the crossbars I found more often than usual small, pointed plastic residues, which then stick unpleasantly into the fingertips.

Also, I broke a part of a CaDA kit for the first time. The rod at the bottom of the photo is usually attached to a pin and remains movable. That happens only with a little pressure, whereby with a part the middle element is broken off to me. Something difficult to describe, looks at the picture, which hopefully explains it.

In addition, it’s a bit harder to join larger parts together. This is not only due to the quality of the individual bricks, but also to the fact that you have to join a two-digit number of plug connections at the same time. But especially the plugs (and here especially the red ones) don’t always fit perfectly into the holes.

Altogether the quality of the stones gets just a B minus from me, because the small imperfections don’t really stop the construction or make it heavier, but just annoy a little bit. I still had sore fingertips after three hours of building.

Apart from the construction, which already takes a lot of time, the associated electronics are also a small highlight. Front and rear tires are each driven by a motor, and the front tires are of course steerable. But here the tires only hit hard to the left or right, you can’t regulate the impact. In addition, two small LEDs are included, which serve as headlights and can also be operated via the remote control.

Speaking of remote control: It is powered by two AA batteries and can operate all the functions of the car independently using several levers and buttons. The receiver, on the other hand, has a rechargeable battery and is charged via a micro-USB cable. The latter can be reached by opening the tailgate.

All in all a nice gimmick. It’s especially fun to see how gears and rods mesh, and then everything works together and the truck really drives. But you shouldn’t expect any speed frenzy: Since the small electric motors rotate only slowly, the maximum speed is given as 0.58 km/h. The speed of the truck is not to be underestimated. After all, the car can negotiate terrain up to a gradient of almost 50°.

By the way, the finished model is 46 cm long and 23 cm high – so it provides enough space on the shelf. ?

With about $100 the C61006 (for which you could think up a more catchy name) is one of the more expensive models. But if you consider the price in relation to the number of parts and the time for the assembly, then this is still a very good offer. I’m slightly disappointed by the quality of some of the stones, because I’m used to better things from other CaDA models. Since this only concerns some stones and also no stones are defective or missing, this does not lead to a too large deduction of points.

Mostly the construction was fun, and the model itself is damn cool thanks to the suspension and the mechanical parts. A project for many hours of fun, especially for or together with children.

Do you already have such models at home? If you are interested in other models, have a look at our articles about the other models from CaDA or Xiaomi Mitu.