0 Kommentare June 5, 2021by Jens
Hey, guys! Just a heads up: The linked offer is already a bit older and the price of the gadget might have changed or it might not be available anymore.

The first set of the CaDA Master Series, which is almost a bit forgotten between the newer ones. The blue Lamborghini replica is a damn cool, albeit very elaborate set that will keep you busy for hours.

Is CaDA getting better and better? At least with this model they are going a newer way. The set CaDA C61041 is a replica of a Lamborghini and consists of 3,842 individual parts. This means that it is already in the premium range, even if the price is only half as high as a very similar Lamborghini set from Denmark. 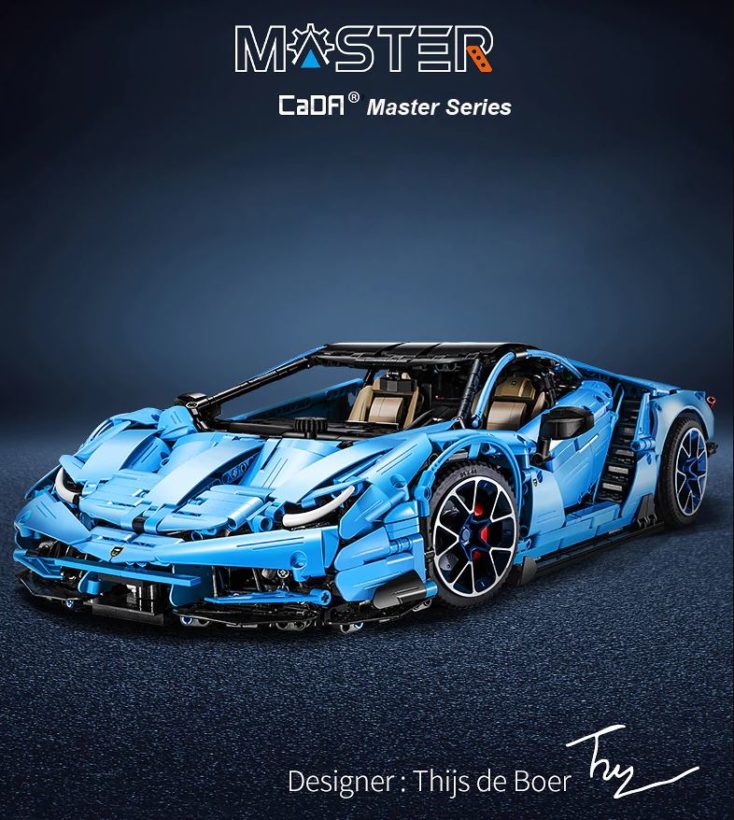 A few words about the background of the model: This was originally a MOC (My Own Creation), i.e. a self-designed model of a terminal block enthusiast. CaDA has teamed up with him and launched the vehicle as a set. Not a stolen model or a copy of an existing set? We like the direction we are going in here. But CaDA can’t officially market the set as a Lamborghini, because they don’t have the license, so it’s simply called “Supercar”.

What is there to say about the model itself that the pictures don’t already convey? 3,842 parts are a hell of a lot, and after all I’ve read about the set so far, the construction is not exactly easy. Be prepared to invest a lot of hours and bring a bit of frustration with you. Besides, this is clearly a display model, so it’s one for display. It is not a toy and because of the complex construction it is not intended for small children. (Nobody keeps you from playing with it, but that’s certainly not the intention, and if something breaks it’s a pity for a $140).

Some parts are movable, for example doors and the engine and boot can be opened and the rear spoiler can be extended. All tires are separately suspended. The car can be steered by hand-of-god control; the steering wheel turns with the car. The engine, which is located in the rear of the car, is also a spectacular sight. It even seems to contain a real gear shift with a total of seven gears.

At first sight I like everything here. The design is absolutely impressive; respect to the designer. Not everyone likes every detail, but that can’t be avoided. I can’t say much about the construction, so I’ll ask around if we can get a set to build it up. But be prepared that it will not be a walk in the park. But if you generally enjoy building and celebrate the model, you might be willing to accept that. And afterwards the joy about the finished model is even greater.

Concerning the quality of the stones I can only refer to my other experience reports about CaDA sets, there I was always very satisfied so far. Please have a look at my articles about the C61018W sportscar or the C61006 offroad truck.

Of course, we had to order the set ourselves once – we just couldn’t help ourselves. I had heard before that the assembly was quite demanding and anything but easy. And although I was quite confident and have already assembled many sets with well over 1000 parts, this model was by far the most strenuous.

But first a few sentences about the packaging. Since we often receive sets, they usually arrive in their original packaging. GearBest, from whom we got the set in this case, also offer a cheaper shipping method that lacks this cardboard box. For the first time, we also received the set in this form. Three individual, small packages arrived with the bags of parts stuffed into them to save as much space as possible. While nothing was missing and all the parts as well as stickers and instructions were included, this type of packaging is still using “interesting” to describe it cautiously. There are a total of five instructions with a combined total of almost 300 pages. The instructions are basically okay, but in some places a bit confusing. For example, several steps are arranged on one page, sometimes from left to right, sometimes first from top to bottom, so that it is easy to skip a step (which is usually noticed immediately). Also, not all steps are really explained, sometimes only an arrow points approximately to the place where a certain piece is to be attached. There is nothing that can’t be explained logically, but all in all it is not the most user-friendly manual I have used from CaDA so far.

At least it is helpful that all parts are pre-sorted and packed in numbered bags. For part A of the instructions, unpack only the bags with a 1 on them, then for part B, unpack 2, and so on.

Why is the construction now more difficult than others? You don’t do more than put bricks together. Nevertheless, there are several points that cost me a few nerves during assembly. Point one: Not all parts are immediately “firmly” mounted. Single gears or rods are plugged in, but are still loose before they are fixed by other parts in a later step. By tilting, these parts sometimes fall off, and then it is sometimes tedious to reassemble a part that you have mounted twenty pages before. Quite apart from the fact that the parts may no longer be easily accessible, because you have built around a lot in the meantime.

Which brings us directly to point two: If you put two larger assembled elements together, which you have to do several times during the build, there are sometimes 10 or even more connectors that have to be connected at the same time. It’s hard enough to align the parts and somehow get all the connectors into the holes provided. But it becomes almost impossible when you can’t even see all of those connectors. 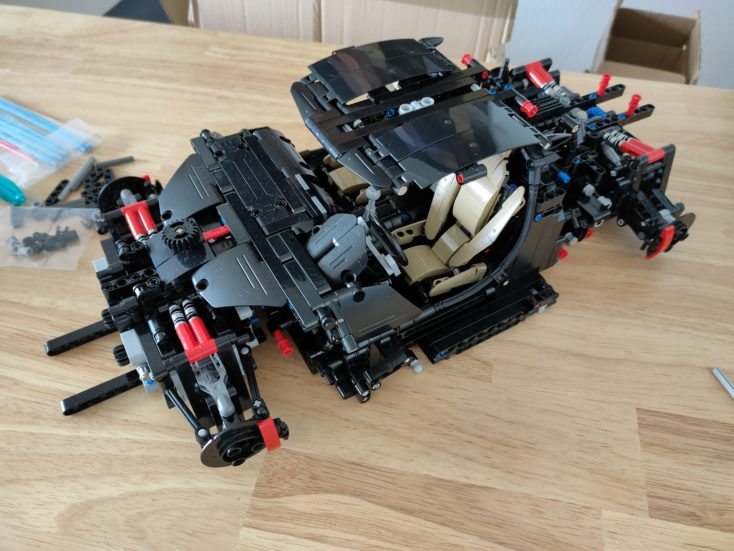 Unless there are some secret building block tricks I don’t know about, the assembly is really challenging. Putting together the larger intermediate steps took some frustration and was usually the point where I quit building for the day.

However, there are only a handful of these steps during the build, and everything else is just as fun as usual. Especially when building the engine or mounting the tires, it’s just fascinating to see how everything falls into place in the end and then actually works.

Price and availability of the C61041 Supercar

CaDA itself wants $189.99 for the car. If you compare this with the model mentioned at the beginning, then this is – measured purely by the range of functions and the number of parts – a damn good price. Meanwhile, they even have their own, official store. GearBest is also cheaper, because you don’t need the original cardboard box when importing from China.