0 Kommentare November 15, 2021by Jens
Hey, guys! Just a heads up: The linked offer is already a bit older and the price of the gadget might have changed or it might not be available anymore.

CaDA is launching new models on the market non-stop. This of course pleases terminal block fans, and this time they even use a very popular model. The C61082W set is an excavator, which thanks to hydraulics also has a fully movable arm. 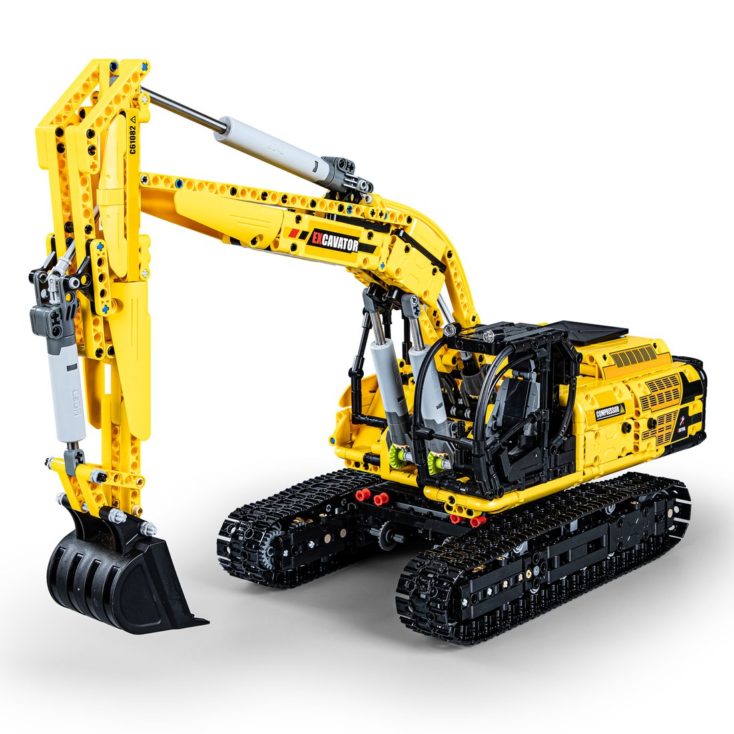 Construction vehicles are a joy to use. Personally, I would like to see more excavators, trucks and cranes, as much as I like many of the sports car sets. CaDA already has a few in its lineup, too, such as a mobile crane, a bulldozer and a telescopic loader. A couple of years ago, Xiaomi also launched some construction vehicles made from sticky bricks, a few of which I’ve also built and liked. So the new excavator from CaDA is in good company.

Construction and quality of the bricks

The set consists of 1,702 parts and is in 1:20 scale. Optionally, it can be equipped with motors, the Power Pack must then be purchased separately. We don’t have the motor here ourselves yet; according to the description, retrofitting is still possible after assembly and should take about 15 minutes.

The assembly is fun throughout and does not require an extraordinary amount of skill. Only a few parts, for example on the arm of the excavator, are a bit more complicated to put together. The instructions also leave nothing to be desired and are easy to understand, the colors are easy to distinguish and all steps are well illustrated. By the way, there are a total of three booklets with a total of almost 200 pages. It is helpful that the parts are pre-sorted. The different bags are numbered, so you don’t have to dump everything out at the same time – this makes the assembly very clear.

A small point of criticism this time regarding the quality of the bricks. On several rods there were small protruding plastic pieces at the ends, which made it difficult to install and partly also hurt the fingers. In terms of the quantity of parts, there were still very few parts, but significantly more than I am used to at CaDA. Hopefully, one is not negligent here in quality control and it is an isolated case. 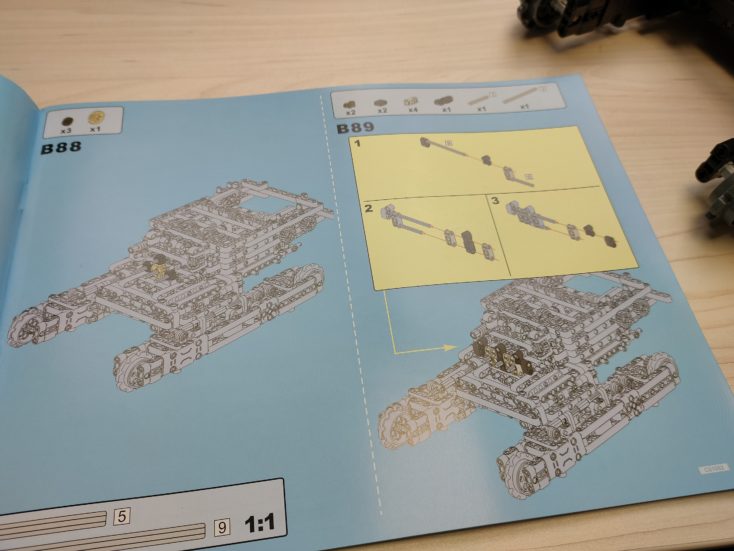 The interior, which contains the transmission and the many, many gears, is also very colorful. Not everyone likes that either, even if you can’t see any of it, at least from the outside, after the assembly. Personally, I like that because it makes it easier to see how everything works. 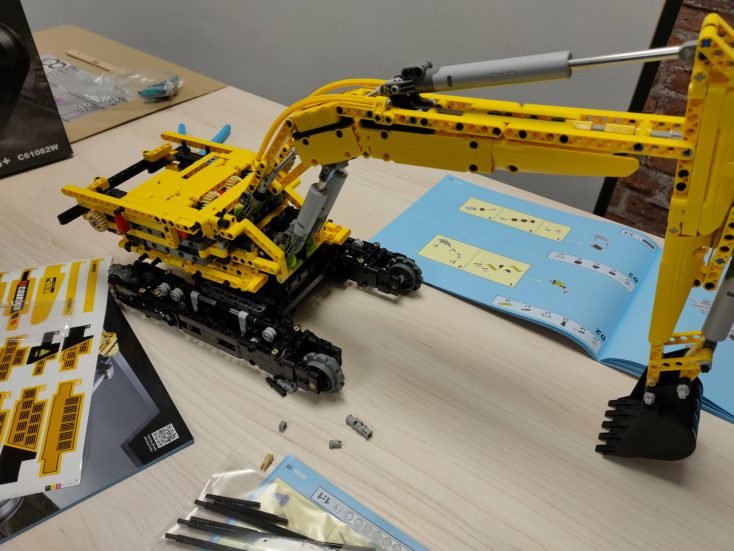 Movable is the excavator even without the engine, many of the parts can be controlled by gears. Thus, the cab can be rotated, the arm and the shovel can be tilted and with the chains of the excavator, of course, he can also move. 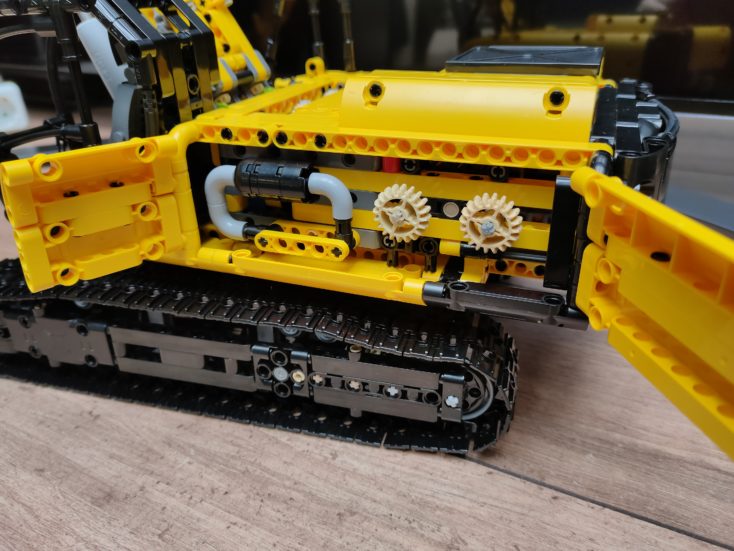 All functions can be controlled – in the non-motorized version – via three wheels. A toggle switch still changes these functions, so two wheels turn the chains of the excavator, in the other settings the arm is moved with it. During assembly, this switch is the part that takes the longest, but is also the most fun for me personally. To see how little by little the various gears mesh and in the end a everything works has something extremely satisfying. 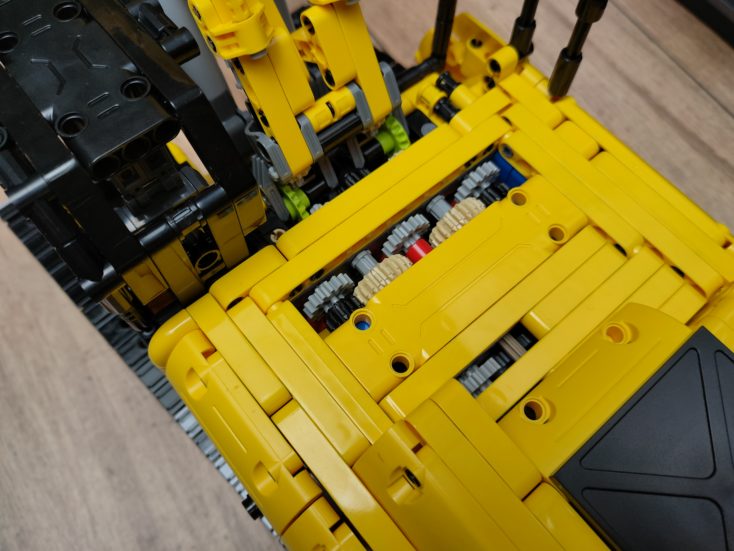 However, this is also one of the biggest criticisms I have of the set. The movement of all elements is extremely slow. Extremely slow. No kidding, to move the arm of the excavator from “fully extended” to “fully retracted”, I have to turn the wheel for several minutes. It’s possible that I made a mistake during setup and some transmission is mounted incorrectly, otherwise it would be really annoying. In addition, the chains can only be moved over them; if you push the excavator, they don’t move unless you put a lot of pressure on them.

On various sides, the crane can be opened and then reveals the view inside. There are a few stickers, which at least according to the pictures fit well to the model. If you don’t like them, you can of course simply leave them off. 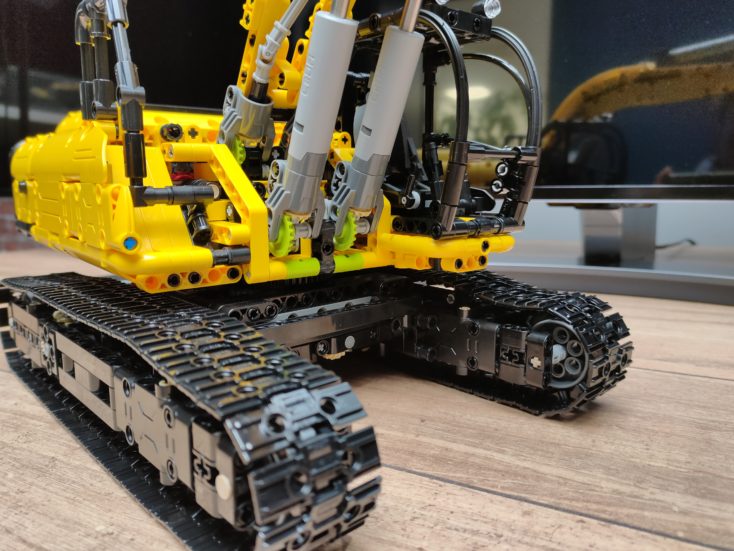 Overall, in my personal opinion, the excavator is perhaps the most beautiful set of CaDA’s year so far. I like just about everything here. With 1,700 parts, the set is extensive enough for a non-boring build. It can be used for play, but also looks nice in the display case. In terms of color, everything here also matches well for me (apart from the two green gears at the bottom of the excavator’s arm).

One real point of criticism is the operation, which is just way too tough by hand. Upgrading the set via motor and remote control is almost a must.

The set is available for about 91€ at CaDA. You can also get it cheaper at AliExpress, but they ship without the box again to save shipping costs. Especially if you want to give the set as a gift (Christmas is not far away), you probably want to have the box.