0 Kommentare May 11, 2021by Jens
Hey, guys! Just a heads up: The linked offer is already a bit older and the price of the gadget might have changed or it might not be available anymore.

What’s better than two sets in one? Three in one. Or simply ten in one! The C71002 set is actually one truck, but contains nine other alternative models that all fit together thematically. 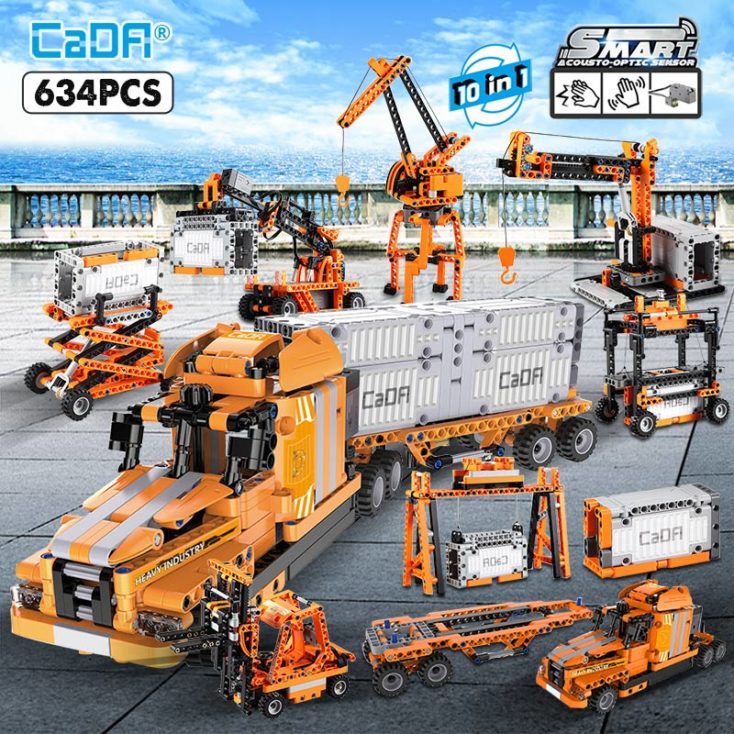 Most of the pictures show the semi-truck with a trailer, which is in fact the actual model. However, as mentioned, there are other models. A second model was quite common especially with older sets, but here there are nine pieces. All of them belong thematically roughly to the container port area, so we find here a forklift and especially various cranes. Almost all of them include the gray containers, which can be lifted, loaded and transported on the trailer.

Not all models require the same number of parts. Depending on which one you build, you will have different numbers of bricks left over, although you probably can’t build two of the models at the same time. Some of the models are equipped with a battery and have a visual and an acoustic sensor.

Unlike many other sets from CaDA, this is one to play with. The movable elements, the containers to be loaded and of course the different construction methods invite to leave the assembled vehicle not only in the showcase. Children in particular should have fun with this. Which doesn’t mean that adults can’t build it too 🙂 .

For the scope offered, the price is also really good. Only one problem remains: If you can not decide which variant you build (or just want to have all models), you have to buy ten times the same set? At least two sets are probably really not a bad choice here, if you are willing to pay more accordingly. On the other hand, of course, a simple way to increase the collection by simply buying another set at a later date.