0 Kommentare February 13, 2022by Jens
Hey, guys! Just a heads up: The linked offer is already a bit older and the price of the gadget might have changed or it might not be available anymore.

Time a slightly different set between sports cars and excavators. Some sets can also be simply cute and invite you to play. So also the very detailed little café of 768 parts with LED lighting. 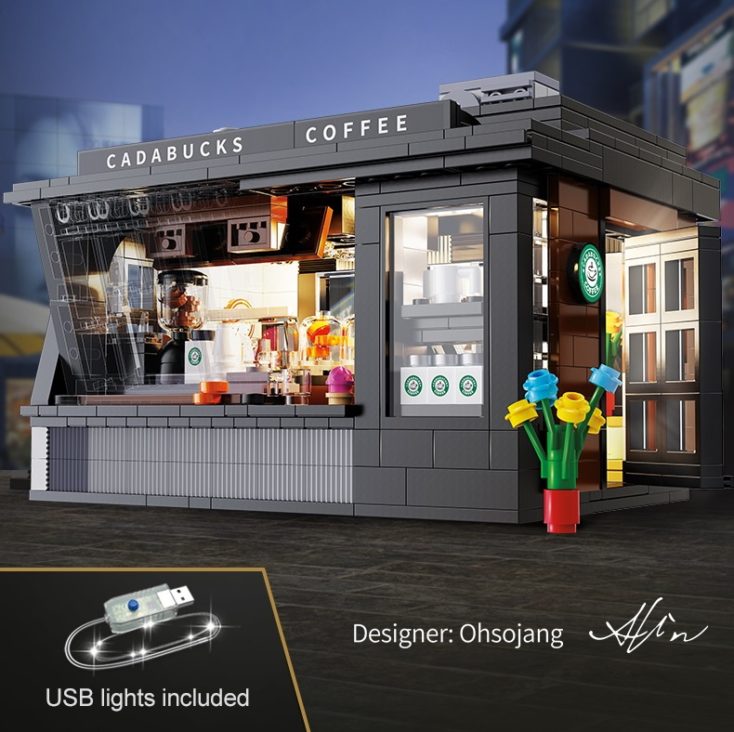 In our mission to really show every new CaDA set here, of course this little coffee shop can’t be missing. The set of 768 pieces was created by designer Ohsojang, which CaDA also states big on the packaging. Normally we know this only from the Master Series of CaDA. It’s nice to see that they’re bringing MOC designers on board for even more sets here. Honor to whom honor is due. 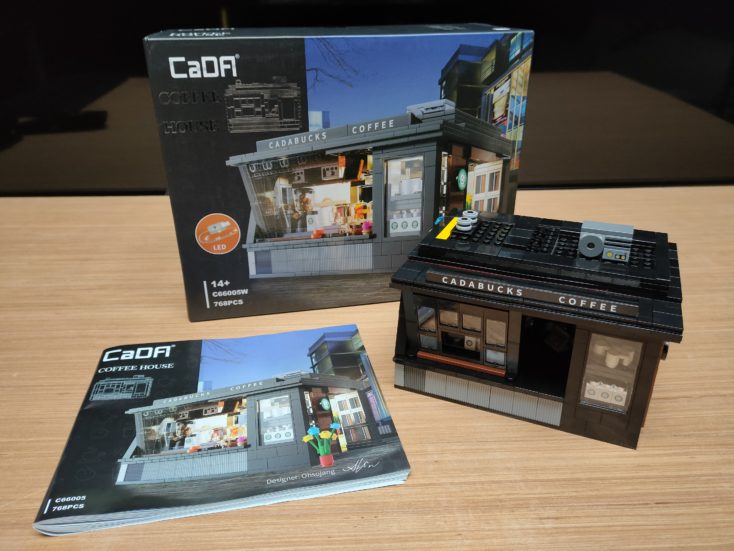 This is a very compact model measuring 18 x 13.2 x 13.5 cm, but it has a modular design and the interior is also very detailed. It is also a classic clamp building block set and does not require many technical elements. While pins, rods and lift arms are connected in the large sports cars, here you still put brick on brick. Tim, who built the set for us, already says that he would like to see more sets like this. I absolutely agree with that. It reminds me even more of the creative brick-building in the nursery than the other technology sets from CaDA.

By the way, the assembly is relatively easy. The enclosed instructions are, as always, easy to understand and explain each individual step very well. Some of the small parts are a bit tricky to attach, especially if you want to add something later in a small space. However, this does not interfere with the building fun in the slightest. Children can definitely manage the construction.

“Modular” in this set means, by the way, that you can easily remove the roof and two of the walls. You can see that well in one of the pictures. So to play with it you have a much better view inside, which by the way is also the right size for the typical mini-figures. The logo is relatively clearly modeled on the Starbucks logo, but a mostly green, round symbol adorns what feels like half of all cafés in China. Here, they also simply write “Cadabucks Coffee” directly above the store in capital letters. 🙂

The set comes with a small LED chain with USB connection. With it, the building can be illuminated and looks even more beautiful, especially as a displayed piece and with little light. Even with the lights installed, by the way, you can hide the USB port in a compartment in the roof of the building, so it does not interfere. While children will be delighted with the many small parts for creative play such as cups, cash register, coffee machine and cupcakes, adults may find joy above all in the chic, illuminated mini café on the shelf.

The word that actually everyone who has seen the set has used to describe it is “cute”. But that also just fits. The coffee machine with the round stones as beans, the cone-shaped white stones as coffee mugs next to it, and the arrangement of the cupcakes and cakes on the counter and behind the display case – it all looks really pretty. 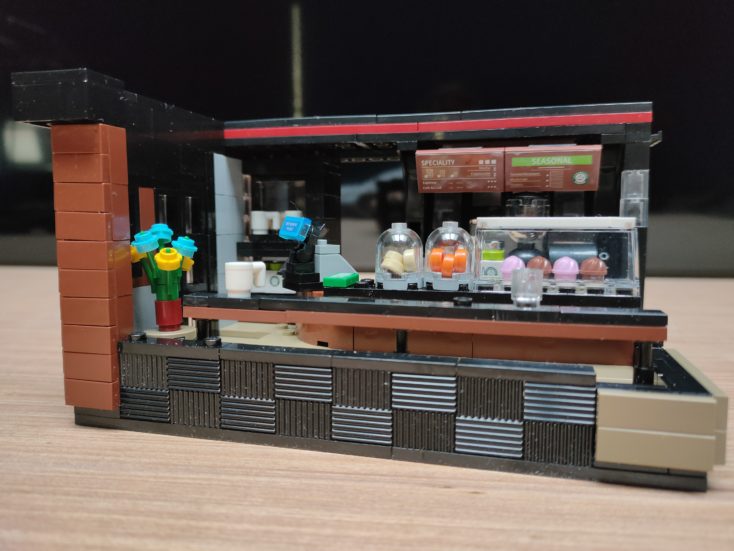 There are about 30 stickers that can be applied to the various elements of the cafe. While stickers are seen as a nuisance by some sticker fans (because printed bricks are just nicer and more durable) they are almost necessary here in my opinion and not really bad. In most cases, the color of the sticker also matches that of the brick, for example in the displays with the menu above the counter or the small pastries. Only the gray of the stickers on the cash register or the vent on the roof doesn’t quite match the stone color.

Who is the café for?

Maybe not a typical CaDA set, but still a very nice one, with a different target audience. If you are more interested in the building sets than the vehicles, you will definitely like this as well. Similar sets include CaDA’s Tofurestaurant or Mouldking’s Restaurants and Cafés (some of which seem to be from the same designer, by the way). Of course, there are even more sets in our themed world of terminal blocks.

Opinions about this set? Exactly your taste or too kitschy? Nice toy set for kids or just because of the LED also a chic decoration set? Coffee or tea? 🙂 Feel free to tell us your opinion in the comments. And in any case, the set has liked very well, we can definitely recommend it if it is worth the price of just under $60 to you.