0 Kommentare July 30, 2021by Jens
Hey, guys! Just a heads up: The linked offer is already a bit older and the price of the gadget might have changed or it might not be available anymore.

CaDA has been quite popular for a while now as an alternative in the field of clamp bricks – also with us. In addition to the almost consistently good quality of the bricks, there are also models that you would not find with other brands. This tank made of 1.722 parts is one of them. 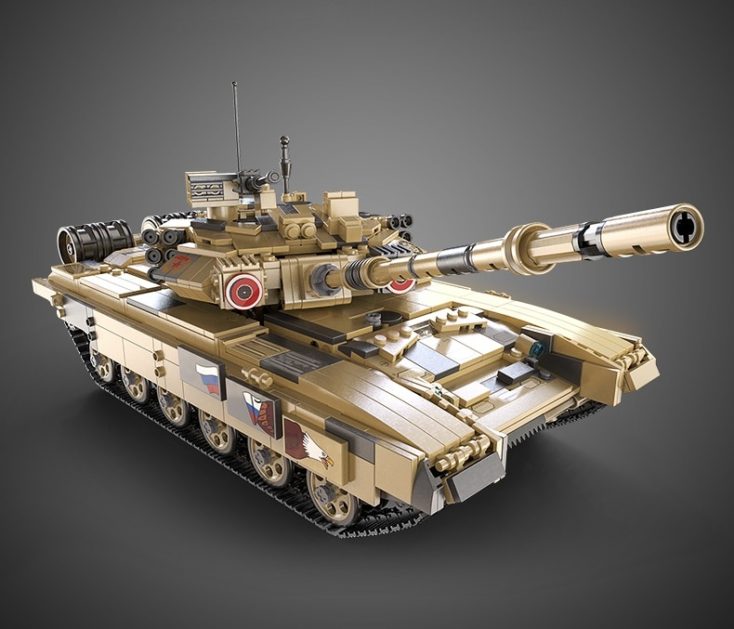 Also something for the eye

In my opinion, the model looks just great. When I discovered it rather by chance while scrolling through the store offers, my eyes immediately got stuck on it. Look at all the little details, the additional weapons and antennas on the turret, the complete armor around the vehicle, the tracks – purely visually I like everything here. 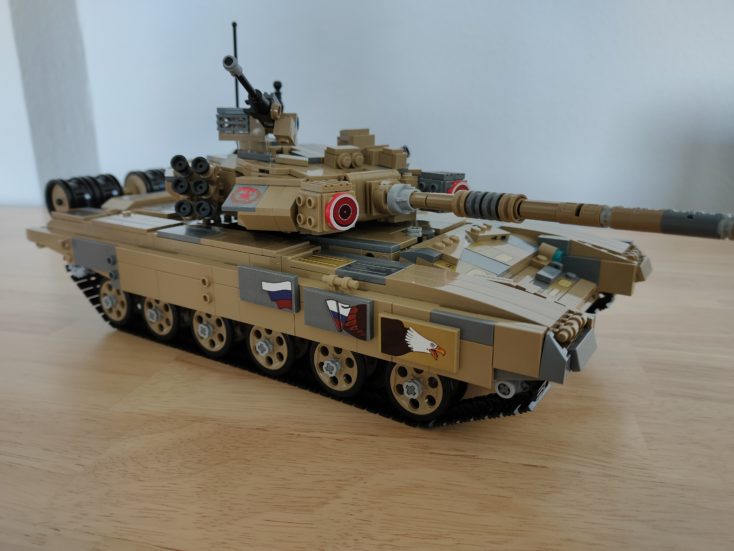 In addition, there are still a lot of functions, which makes the model absolutely suitable as a toy. So whether it’s an exhibit for the showcase or a toy for the kids’ room – both should be possible here. And with the number of bricks, you’ll definitely be busy building it on your own for a few hours.

By “functions” I mean primarily movable elements through which the vehicle can be changed and moved. Here, the weapons can be tilted and the turret rotated, and the tank can also be moved via the chains. It’s also particularly nice to take a look inside: the turret can be removed relatively easily, revealing three separate chambers. You can see this well on the picture below.

These chambers are also relevant for the perhaps most important function: the optional motor. Optional, because it is not included as standard, but has to be purchased additionally. But then the decorative parts inside can simply be exchanged for the electronics. The instructions for this can be found on the last pages of the enclosed printed manual. The parts needed (apart from the electronics themselves) for the conversion are already included and are simply not used when building without the motor.

With the motor, the tank is then remotely controllable. In addition to forward, reverse and steering, this also includes turning the turret – very cool.

The many motifs and lettering on the tank are stickers and not prints. Not everyone likes that, but at least you have the option to simply leave them off. A bit unattractive: while the gray stickers match the gray parts perfectly, the brown stickers are in a completely different shade than the brown bricks. 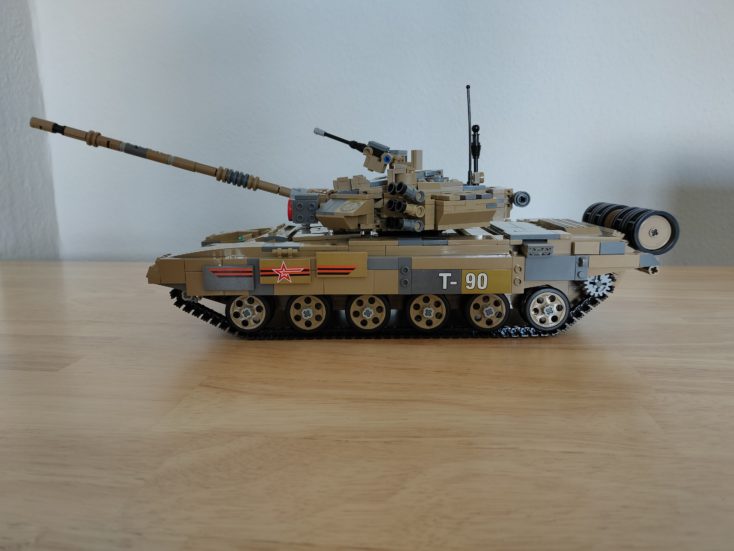 Because I wanted to build a set again, I just ordered the T90 by myself. It cost about 60€ at Amazon and arrived after two days. Even came in the original box, everything was wonderful. Since the delivery fell in the heat period in June, the package then stood around for two weeks. But when the rain came, it was time for the blocks. 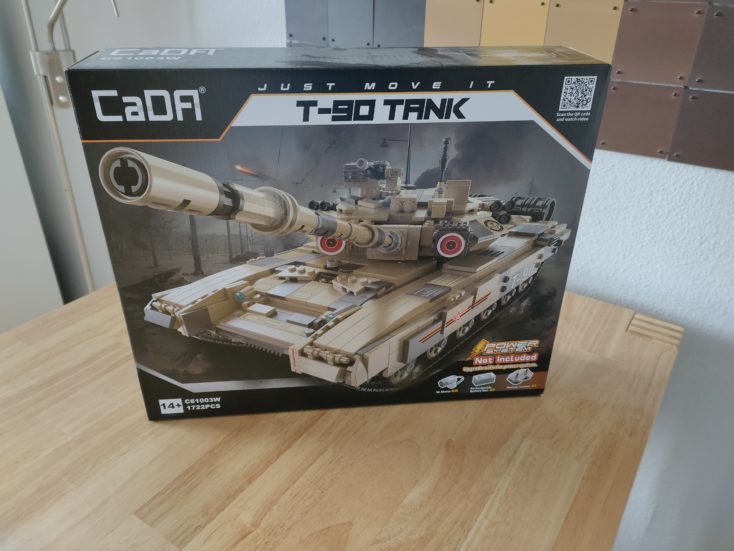 The CaDA box was again stowed in the Amazon box together with cushioning material. So the box was also undamaged and in pristine condition. 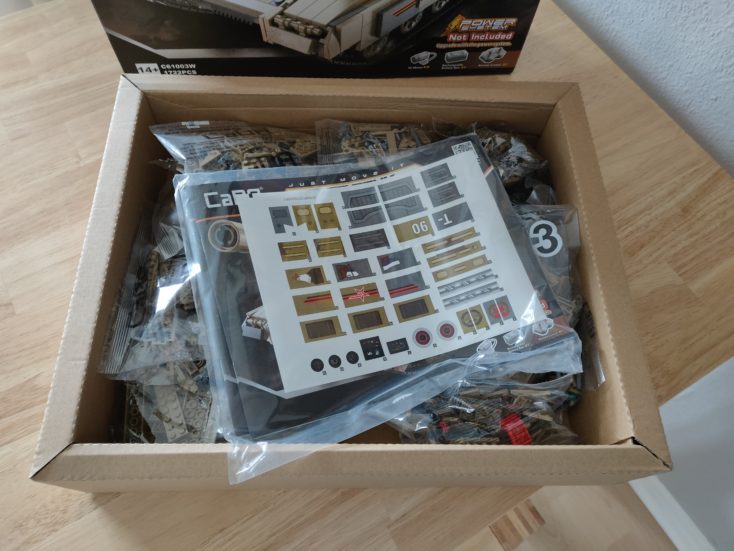 Inside then the usual picture. Instructions and stickers are packed in a separate bag, otherwise there are many small bags with the pre-sorted bricks.

The bags with the bricks are numbered and belong to the individual building steps. For part A you need all bags with a 1, for part B all with a 2 and so on. This makes the build very clear, as you never have to unpack more than a few hundred parts, which are also roughly sorted. 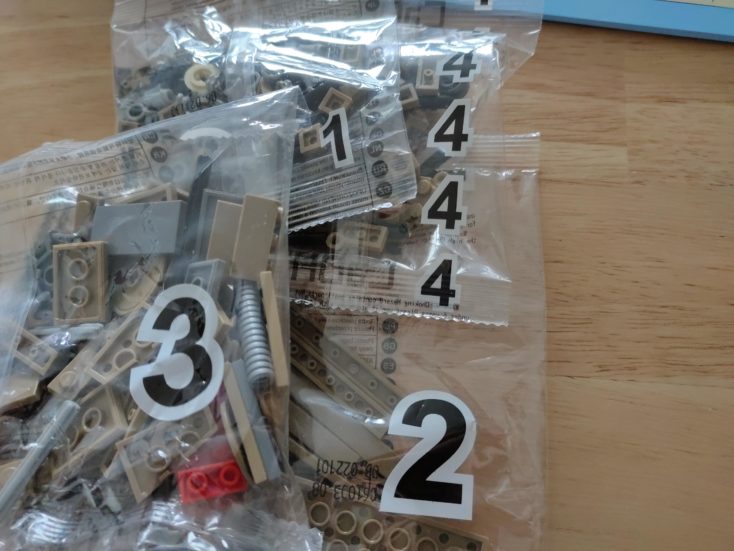 There is not much to say about the manual either. It is clear as always and consists of two booklets. The color is not always perfectly visible on some small parts. But since most of the set consists of only one color, this is almost never a problem. 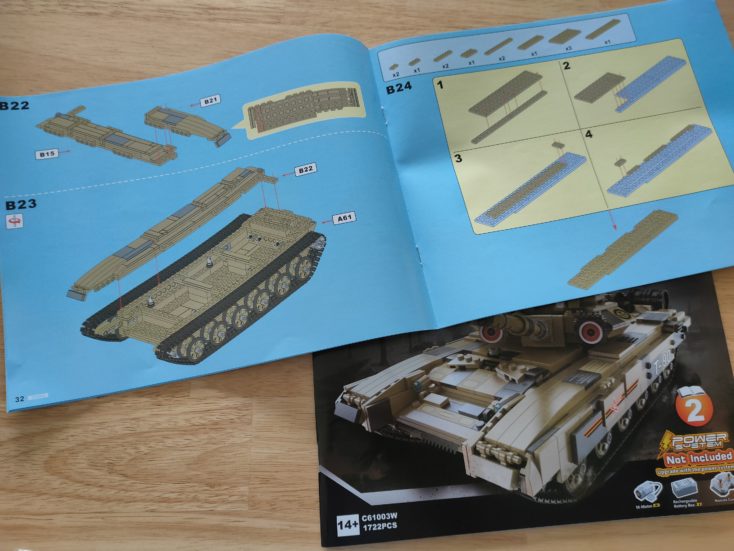 Although the build was a lot of fun, I would describe it as “easy” more than anything else. That’s not a bad thing, quite the opposite, it’s just extremely quick and straightforward. Also, because there are hardly any technical elements built in here and you just put plates and bricks on top of each other, it goes easily by hand. I was surprised how fast I was done.

In my opinion, the recommended age of 14 is way too high, at least in terms of the complexity of the build. Even younger children can do this without any problems. It feels like 90% of the parts are the same light brown, so there is almost never any confusion. There are also no really complicated steps.

If I had something to criticize, then at most that the tank might already be too boring in construction for experienced hobbyists due to the simple color scheme. I was mostly on autopilot here myself and the set built itself almost by itself. If you like that, however, that’s one of the advantages of the T90.

Maybe you could read it out, but the CaDA T90 just really appealed to me right away. Now that I have built it myself, I am also convinced of the quality of the bricks.For the price (and any even lower offer price) you can simply buy it without hesitation if you like the model.

If you want to know more about CaDA, you can read my articles about the 919 sports car or the action rifle, or search for one of the other CaDA models here on China-Gadgets.