2 Kommentare May 19, 2018 by Maike
Hey, guys! Just a heads up: The linked offer is already a bit older and the price of the gadget might have changed or it might not be available anymore.

You love sharpness, but Tabasco, Sambal-Oelek, Habanero and Piri-Piri are no longer enough for you? You want to cry again? How about the hottest, freely available chili variety in the world so far: the carolina reaper! 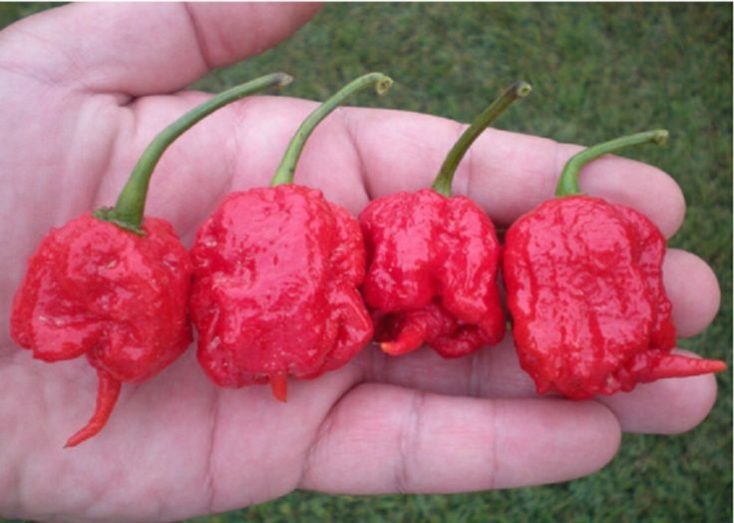 The second-hottest chili in the world has the inviting name Carolina Reaper and comes with a neatly high Scoville value. For those of you who are wondering: Sco-what? In Scoville – SCU for short – the degree of sharpness in pepper plants – which also include chillies – is measured. Whereas the measurement used to be purely subjective, the proportion of capsaicinoids in the plant is now measured. Capsaicinoids are alkaloids that have a single effect on the human body: They stimulate the heat and pain receptors in the body so that we feel hotness.

Now that you have a rough overview of the varieties and products many of us come into contact with in our daily lives – with the exception of pepper spray, I hope – what do you think the Carolina Reaper chillies are in? 600,000 SCU, which makes it roughly twice as hot as pepper spray? 1,000,000 SCU, about 10,000 times hot as peppers? Unfortunately you are just as wrong as all those who are already planning their next Chili Con Carne, or a bottle of mexican sauce who should literally knock down their friends. The Carolina Reaper chillies are around 2,000,000 SCU, which is about ten times as much as pepper spray. It is only surpassed by the HP48 Death Strain, which is not yet freely available.

Are you still so brave? Then dare – of course we expect an exact report of experience. But please don’t overestimate yourself as much as your colleague in the video ? (Spoiler-Warning: Nothing for sensitive people)