Eats up the money just like that – Coin Snacker piggy bank for $8.46

0 Kommentare January 8, 2019 by Maike
Hey, guys! Just a heads up: The linked offer is already a bit older and the price of the gadget might have changed or it might not be available anymore.

Piggy banks are out, they’re just standing around doing nothing. For you gadget lovers there are already some money boxes, but now there is Snacky, the face bank or even the coin snacker, probably the most casual way to create an emergency savings. Once you’ve seen him gobble up the hard metal discs, there’ll never be any change flying around your house again. 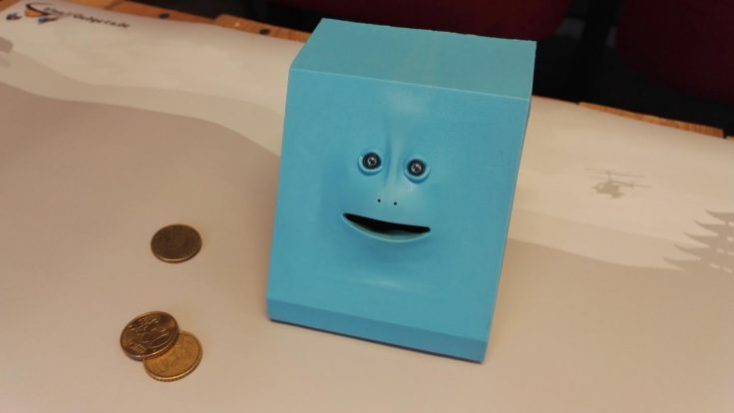 The face bank measures about 9.5 x 9.5 x 9.8 cm and weighs 350 g, without coins of course. Snacky is run with 2 AA-BAtteries, which are not included. You can choose between a pink, a blue and a red version. The enthusiasm for the gadget has not least triggered videos like this one, because it actually speaks for itself:

Just like the little boy on the video, most people react at the first sight of “Snacky”. We’ve now fed Facebank a lot of change, and it’s always fun to watch her chew. But unfortunately there is a small hook. This becomes clear when you look at how it works.

The money box is switched on by a switch on the back. Then she chews for about 10 seconds and tries to swallow coins between her lips. Then she refuses to eat until you turn the switch off and on again. In our opinion, it would be more practical to let the Facebank munch for as long as the switch is on, or instead to use a button instead of a switch, so that you don’t have to switch back and forth all the time.

Apart from this unnecessary complication of the gadget, it works/eats quite well. Sure, from time to time something goes wrong and a coin falls out of his mouth while chewing, but that’s probably what happens when you want to gobble everything down greedily. So there’s also an educational message hiding here: Better to eat carefully and not too fast. 慢慢吃, as the Chinese says.

Definitely an entertaining gadget, which isn’t expensive either. As a money box for money gifts at the birthday party set up, or even as a funny gift a great idea. But be prepared for the fact that the fun will probably go away and that after a while you’ll still fall back on the good old piggy bank. ?