0 Kommentare May 7, 2022by Jens
Hey, guys! Just a heads up: The linked offer is already a bit older and the price of the gadget might have changed or it might not be available anymore.

The absolutely lovingly designed and cute set from CaDA is crafting fun for children and leaves plenty of room for creativity. For clip brick fans also interesting: CaDA uses here for the first time the newly developed “Clip Bricks” – bricks that are built like clothespins and hold here the flowers and leaves of the plants. 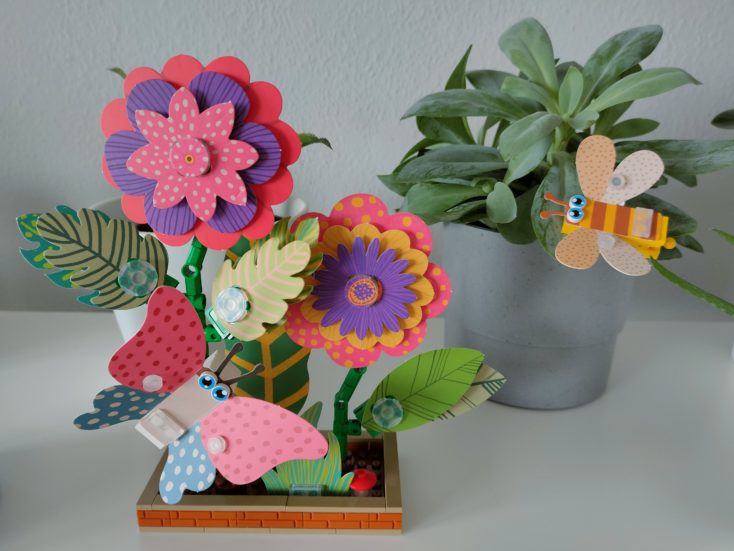 The manufacturer CaDA has been making high quality clamp brick sets for years. The bricks are 100% compatible with those of other well-known manufacturers and are made of the same materials that are safe for health. The most obvious advantage of the brand over the market leader is the price of the sets, which is usually much cheaper for the same number of bricks or the same size of the set.

Recently, however, the company has also become more creative and courageous in its choice of sets. After originally producing mainly vehicles made of technical parts, they are now steadily expanding the range. Most recently, the model of the solar system stood out for us – I’ve already mentioned here several times that it has become my absolute favorite set across all brands.

With the flower garden, CaDA is now breaking new ground once again. The set is not aimed at the actual target group of hobbyists and terminal block fans, but also invites people who are otherwise less familiar with them. Above all, it appeals to children, who can both tinker according to instructions and live out their creativity. In addition, with “CaDA Elements” they seem to be starting a new series; it’s quite possible that we can expect more sets like this in the future.

Contents of the box

The box is relatively compact – sure, there aren’t that many bricks here. I haven’t counted, but “230 PCS” probably includes the paper pieces as well. The manufacturer suggests a minimum age of six here. With appropriate help, younger children can certainly get started with this; however, some of the components are quite small. Since these can be swallowed, parents should consider from what age their child can really already handle it. 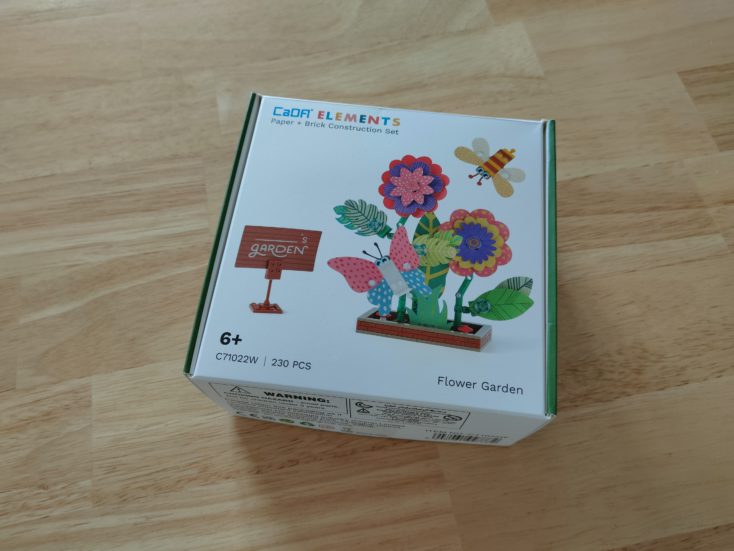 A familiar picture then awaits us in the box. The individual building blocks are packed in two plastic bags. In an additional bag are the instructions and the various paper sheets with the flowers and leaves.

The quality of all parts is good. When cutting out the flowers you have to be careful later not to tear the paper. This succeeds with a little care but very well, me no piece is torn. 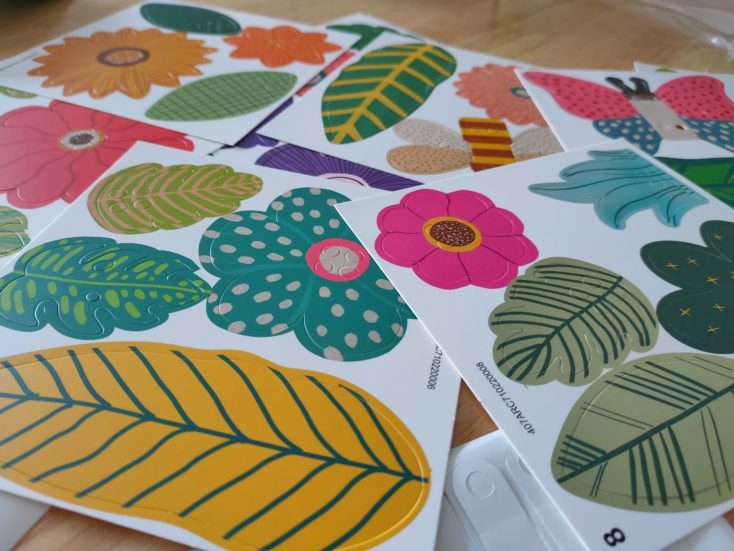 All in all, I am already very satisfied with the selection here alone – more about that in a moment. By the way, the cardboard can / should be cut up later. On the inside is a base for the bed. This is of course optional and I have my cardboard also not yet wanted to cut. 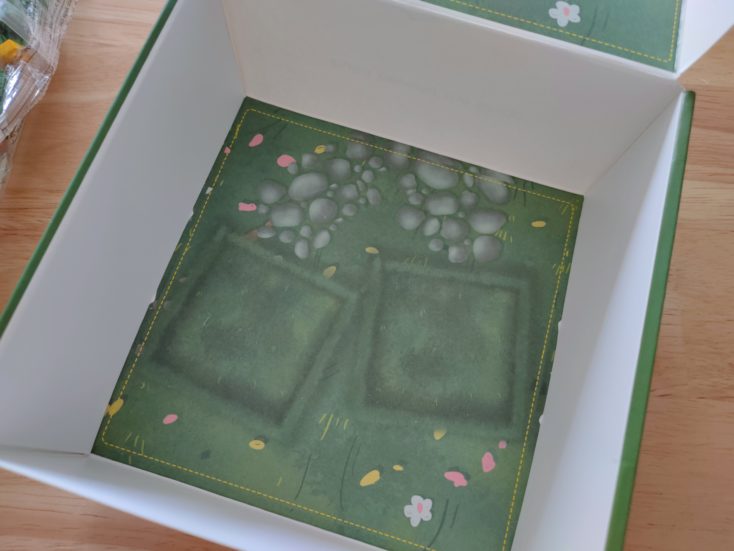 CaDA also states that biodegradable materials are used in the stones. CaDA also confirmed this to me again when asked, but I can’t quite understand it. The stones do not differ in color and feel to the touch from all other stones that I have had in my hands so far. 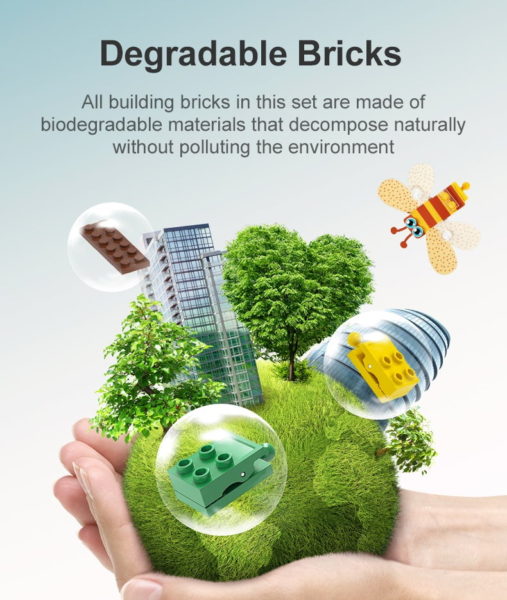 But if that’s true, it’s a big step, of course. I have no idea what this costs in production, and simply doubt that you can expect this from now on from all sets of the brand. For a set with a nature theme, however, it fits naturally and makes an important statement. Simply as a precaution, however, I would still dispose of the stones properly for now and not just throw them in the garden and expect them to dissolve 🙂

Build according to instructions – or freestyle

The instructions are not really that different from others. Right at the beginning, however, you have to make the decision whether to build one large “bed” or two smaller ones. For the construction of the flowers, this makes little difference, but the base on which they stand at the end, is then just a little different. Of course, it is entirely up to personal taste and can also be converted very easily afterwards.

There are not many steps here and with a little help even younger children can manage very well. In addition to putting together building blocks, a large part of the steps is to remove the flowers from the sheets of paper.

Although the instructions specify which blossoms you can use, and I followed them exactly in my construction. But you don’t have to do that and can simply use the flowers that you like. Do you like yellow better than pink? No problem, there is enough choice. You’ll find a few more suggestions in the instructions, but you’re completely free to design your own.

In fact, I was surprised at how much extra material is here in the box. The picture below shows the sheets after assembly – so many variations are left and could be used instead of the default ones. Since even a few extra bricks remain over, you can even craft at least one, maybe even two additional flowers.

And if you really want to be creative, paint your own flowers. The back of the paper is white and can, of course, easily be provided with color. Theoretically, you can also cut out your own flowers and connect them to the bricks. As I said, it’s more of a craft project than a classic building block set.

By the way, the bee and the butterfly also use the new clip stones. With them you can clamp them to the leaves of the flowers or other thin objects.

How the flower bed then looks ready built, you can see in the photos. I can not help but just admit here that I also find it damn cute. Maybe not a set that I put in my own collection, but what I would give my children without hesitation.

The manufacturer CaDA sells the set in their own online store. We’ve ordered from here as well, and the order is usually very reliable, but can take a week or two to arrive, as shipping is from China. Prices are in US dollars; $24.99 is roughly equivalent to 23-24€. Since the package is shipped from outside the EU, you may also have to pay taxes of about 5€ on delivery, which would make the price of the set more like 28€.

Assessment: Cute crafting fun for the little ones

The set was a surprise for me. As someone who usually builds racing cars and excavators out of clamp bricks, this was something different. With these sets, however, you can simply not compare the flower bed and I do not want that here.

I repeat myself, but it’s just a very nice craft set for children. The content of the package is very extensive and absolutely supports creative building. The quality of the individual parts is very good as usual from CaDA, in addition, even new bricks are used here with the Clip Bricks, which are not yet available in any other set. If I had something to complain about, then only that the price could perhaps be a little lower, if you fix this only to the number of parts. For the offered here I feel everything under $30 but still as absolutely justifiable.