0 Kommentare July 14, 2020by Tim
Hey, guys! Just a heads up: The linked offer is already a bit older and the price of the gadget might have changed or it might not be available anymore.

Under the name of “Daewoo”, Xiaomi is launching an extremely interesting fan from its own ecosystem, which does not have any blades and at the same time is intended to improve the indoor air. When designing the Daewoo F9, one inevitably has to think of the “pure cool” series of the British vacuum cleaner manufacturer Dyson. Is Xiaomi as functional as the top dog? 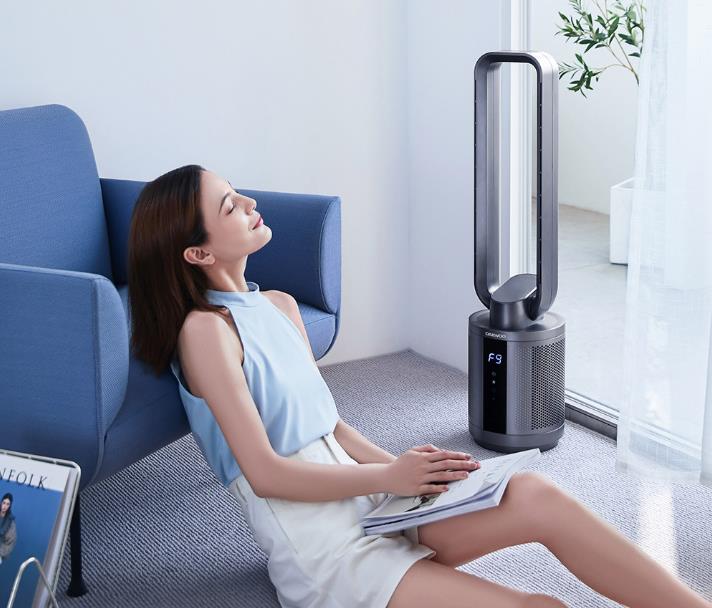 On Xiaomi’s own crowdfunding and sales platform “Xiaomiyoupin” you can always find exciting new products. Unfortunately, these can only be ordered by people with Chinese residence. The fact that a product is sold on Xiaomiyoupin does not necessarily mean that it was produced by Xiaomi. The Daewoo brand, however, has often come across to us as a company associated with Xiaomi. Thus, the wingless fan is also officially advertised under the Xiaomi flag.

The first fans were powered by people using cranks or pedals, today they’re almost always electric. They are supposed to distribute the air in the room optimally, that much is clear. The F9 Pro, like the Dyson fans, should also be able to detect particles and gases and remove pollutants. It also analyses and reports pollutants in real time. Its shape also enables it to provide a focused airflow, which “normal fans” such as the Smartmi Standing Fan 2 are also capable of.

A built-in HEPA filter absorbs pollutants such as mould, fine dust or gases. An activated carbon filter to remove gases such as formaldehyde, benzene and nitrogen dioxide is also included. Without having tested the device, we can of course not say how well it works in practice.

The display shows the current operating mode and the air quality in the room. We know this from the Xiaomi air purifiers. Air humidity, temperature, volatile organic compounds, fine dust and gases are also monitored by the Daewoo F9 Pro. So on the sheet of paper almost everything is the same as with the Dyson fans with air purifiers. 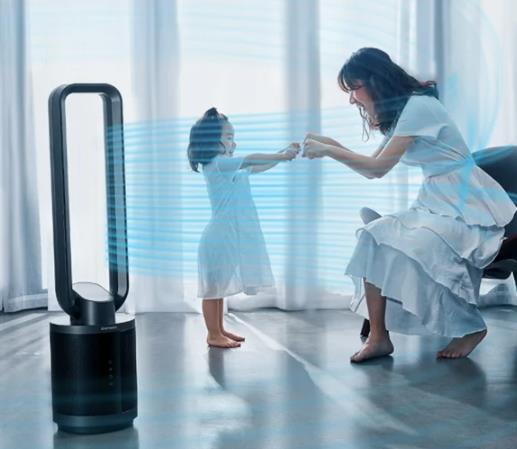 Flexible yes, but could be more

A disadvantage of the Xiaomi device compared to the pure-cool series is, however, that it can only rotate through 60° at the bottom and therefore has to be used very precisely. A 350° rotation as with the Dyson fans would ensure that really clean air is distributed throughout the room. But even the wingless fan at the top only rotates up to 18°. Dyson models are much more flexible in this respect.

Surprisingly, there’s no app for controlling the fan, although Xiaomi and its subsidiaries even provide their vacuum cleaners with app control. Thus, everything is directly adjusted on the device via display. For the nightly use in the bedroom there is also an adjustable mode, which is supposed to be quieter than the others. According to the manufacturer, the operating noise is then at 35 dB, which is a value at which you can certainly find sleep if you’re not too sensitive. Such devices are also useful in the kitchen.

On Xiaomiyoupin, the Daewoo F9 Pro costs 999 Yuan, the equivalent of $143, and although the price will be a bit more expensive for us here in this country, the fan is unlikely to crack the $600 RRP of the Dyson models. Questionable is the replacement filter supply, which is definitely needed when operating an air purifying fan. These should also not be as expensive as the Dyson filters.

In general and in this price range, a quite exciting device that of course still has to keep its promises in practice.

Are air purifying devices interesting for you?