13 Kommentare September 22, 2018 by Maike
Hey, guys! Just a heads up: The linked offer is already a bit older and the price of the gadget might have changed or it might not be available anymore.

With DJI we are in the top class of drones (also in terms of price), and the DJI Mavic Pro is one of the latest models from the Chinese technology company. The Mavic is more or less on the same technical level as the more well-known Phantom 4 of the DJI Phantom series, but it is much more compact and follows the trend of the “foldable” design that we can currently observe with quadrocopters of all sizes. The DJI Mavic is available since the end of last year. 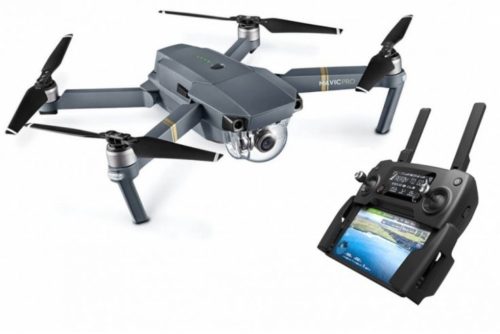 Some people could be taken by surprise when they see the price: “A drone for such a price, I thought technology from China would be so cheap?” China is not just China, and DJI has become one of the world’s most important names in the drone industry. And for the price you also get the according technology.

According to the description, the Mavic is “no bigger than a water bottle”, and thus much easier to transport than the Phantom 4 or other video quadcopters such as the Mi Drone. The “Mavic Pro Combo” comes with a transport bag, but smaller (and inexpensive) bags are also available from other manufacturers.

The remote control is similar, it is also comparatively small and can be folded up. With DJI one can assume a top processing of all components. Another special feature besides the foldable arms is the extremely small three-axis gimbal of the camera. This provides – if the drone wobbles – for a stable image.

The range of the drone is indicated with seven kilometers. The live image of the camera is transferred to your own smartphone, which is connected to the remote control and clamped into the provided holder, which additionally requires the app DJI GO, which is available free of charge for Android like iOS. The drone’s 240g battery has a capacity of 3830mAh, which is sufficient for a maximum flight time of 27 minutes.

If you have a good command of the drone after a certain period of acclimatization, you can try one of the five different flight modes. First and foremost the sport mode, which can be selected via a controller key and can thus be quickly activated. In this mode the drone reaches a top speed of up to 65 km/h! Tripod mode, on the other hand, requires lower speeds (<2 km/h) that allow precise camera shots. At such a low speed it should also be possible to take good pictures indoors. Active Track mode is like the drone’s selfie mode. A square around the person or the object to be tracked appears on the live image of the smartphone and follows it. The Mavic Pro not only remembers the outline of the person, but also the colours – very smart.

You can choose whether the drone flies to your side or normally behind you. Attention: With lateral flight no obstacle detection is possible, because the sensors of the Mavic Pro are located at the front. Gesture mode allows you to take photos without having to hold the controller or smartphone in your hand. The Terrain-Modous lets the drone know if you are running up a mountain or if there are any gradients in front of you. Normally the drone would fly into the obstacle (into the mountain), but in terrain mode the Mavic Pro recognizes this and climbs along with its user. This keeps the distance to the ground when it flies behind its pilot.

The camera of the DJI Mavic Pro

The camera records video at up to 4K @30fps; FullHD even up to 96fps and 720p at up to 120fps. The shooting angle (FOV) is 78.8°. The built-in gimbal allows the camera to be rotated (“roll”) or tilted (“pitch”, -90° to+30°). In order not to have to fly and film completely manually, the drone can fly off predefined paths via GPS and GLONASS, follow a moving object and avoid collisions.

Another special feature besides the foldable arms is the aforementioned extremely small three-axis gimbal of the camera. This provides – if the drone wobbles – for a stable image. The images are saved as MOV or MP4 and the quadopter takes photos with 12 megapixels in JPEG or DNG RAW format. Depending on the selected modes (tripod mode recommended), good videos with soft camera movements should be possible. In various shots I could see so far, the images were very sharp and rich in contrast.

Is it safe to order in China?

At such a price you understandably don’t want to take any risks. The China Shop GearBest recommended here offers payment via Paypal, so you don’t have to worry. If the goods arrive defective or are not delivered, you have up to 180 days at Paypal to report the case. Ordering in China is no longer a lottery but an order process like any other.

The DJI Mavic is not a Quadcopter for absolute beginners and discourages most of them just by the price. But if you have a little bit of experience, you will quickly get along with the intuitive controls, which will take a lot off your hands. The article is only meant to give you a first impression of the drone and maybe you’d like to go deeper into the matter.