0 Kommentare July 20, 2019by Jens
Hey, guys! Just a heads up: The linked offer is already a bit older and the price of the gadget might have changed or it might not be available anymore.

DJI, best known as the world leader in drones, has announced a new version of the Ronin Gimbal for DSLM cameras. The Ronin-SC is much lighter than its predecessor and can be worn with one hand. 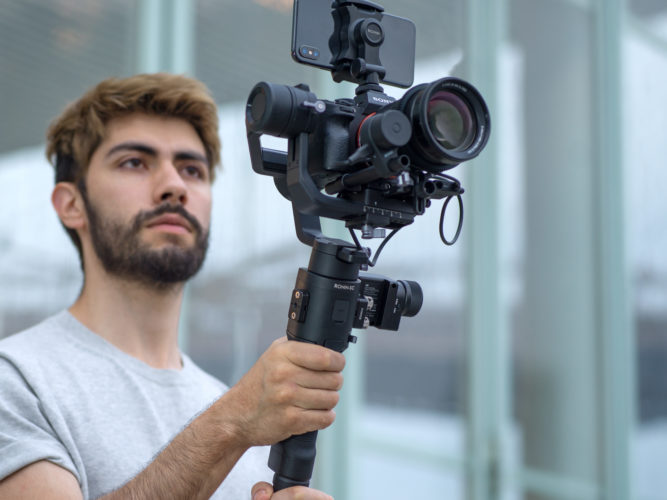 The new gimbal bears the name Ronin-SC (short for Ronin-S Compact) and is a 41% lighter version of the Ronin-S, which was launched in 2018. Its weight is 1.1 kg, the maximum weight of the camera is 2 kg. The dimensions of the gimbal are 220 x 200 x 75 mm. However, it can be dismantled or folded up, which saves additional space during transport.

It is also promised to make balancing easier. Once performed, the camera can be removed and the settings are retained by the new position locking system. Each of the three axes can be locked, which is an advantage for safe transport. In addition, the camera can be repositioned quickly and easily without having to rebalance it. Multiple smart shooting modes are designed to make filming even easier and more intuitive. The Active Track 3.0 feature, similar to the motion detection of DJI drones, makes it easier to detect and track people with the connected camera. In addition to the automatic functions, the gimbal can also be operated manually via the joystick. In addition, the gimbal can also be operated from a distance with the included remote control, for example when mounted on a tripod. A comprehensive range of accessories is also promised, such as a focus wheel and motor and a handle with integrated rechargeable battery. The battery life is specified by DJI as up to 11 hours.

For those who have a real use for it, the Ronin-SC certainly comes as a promising option. Those who are willing to spend several hundred dollars on the camera will not want to save on the gimbal either.

The Ronin-SC is interesting despite the price of $439. For $539 the gimbal is also available as a combo, in which the accessories for the focus motor are also included.