19 Kommentare January 25, 2019by Thorben
Hey, guys! Just a heads up: The linked offer is already a bit older and the price of the gadget might have changed or it might not be available anymore.

The year 2018 has already shown that smartphones are becoming more and more experimental. With the Doogee S90, the manufacturer is releasing a modular smartphone that will be part of the Kickstarter campaign from 15 January. You can save a lot in the module bundle, which is supposed to cost $399. Meanwhile we will try to get a test device, because we find the concept very exciting. Doogee has also mentioned some information about the modules that have been added in the article below. 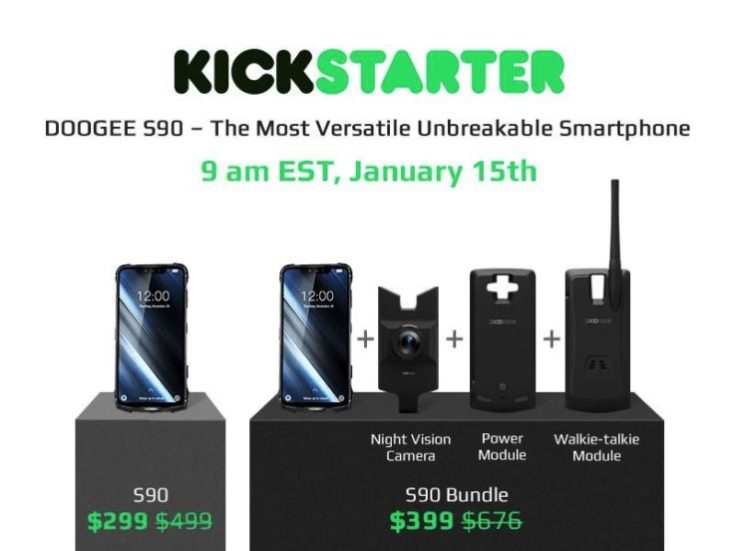 Doogee promised us a few more innovations at the beginning of the year, but now they seem to have specialized on rugged smartphones. The Doogee S90 is also a rugged smartphone, but with a modular system with which you can easily connect a powerbank, for example. 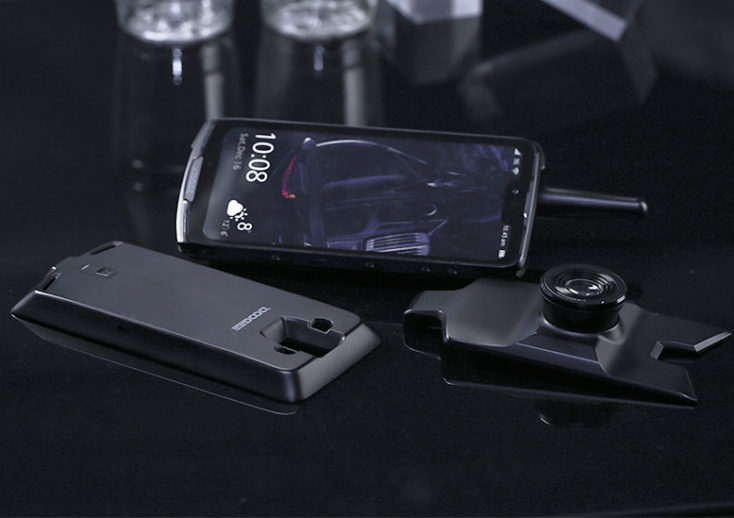 Whether it’s the S90, S60 or S70 is not obvious at first glance. The Doogee S90 is mainly black, otherwise not much happens on the surface of the S90. In order to be relatively “borderless” on an outdoor smartphone, Doogee also uses a notch here. We’re not yet told how many inches the display diagonal measures, but anything under 6 inches would surprise us somewhat. A clearly visible edge runs around the screen, especially because of the rubber elements around the four corners of the device you can already see that it’s an outdoor smartphone. 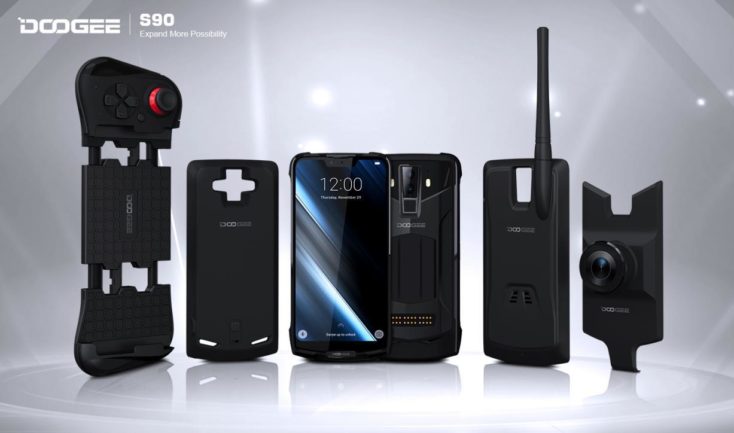 At the edge, the Doogee S90 naturally accommodates the volume control, the power button and two more buttons. At the bottom right there could be a camera button that serves as a trigger for photos. On the left side there is another button marked red. Possibly it is a PTT button (push to talk) or a kind of SOS button. 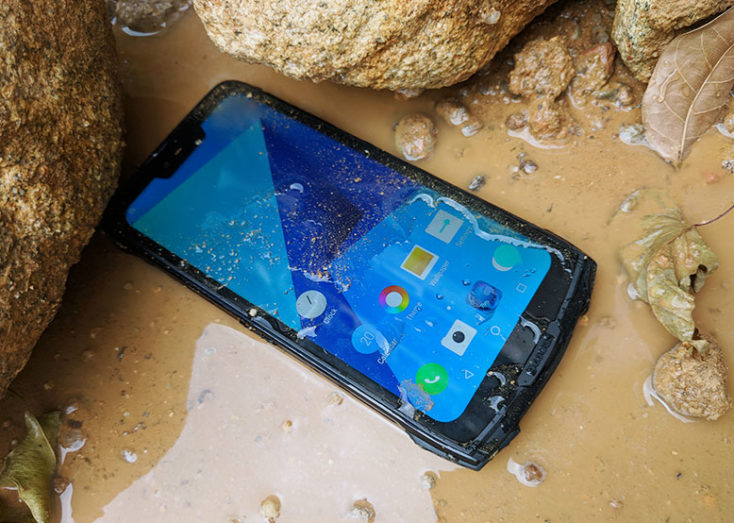 Doogee takes the outdoor claim seriously. According to the manufacturer, it is “the most robust smartphone ever made“. It’s protected against falls, moisture, extreme temperatures and more. It’s also interesting to note that it lasts from 1.5m to 2 weeks even in water depths – provided the battery stays on for that long. Such information should be taken with caution, especially since some of our alleged IP68-protected smartphones have already given up after a minute in the water.

Powerbank to clamp on

More exciting, however, is the back of the Doogee S90. In addition to the dual camera, flash and fingerprint sensor, it also has 24 gold metal pins for signal transmission. Because the S90 can be attached to various modules, similar to Motorola’s Moto mods. The module adheres to the smartphone via a magnet, eliminating the need for a cumbersome USB connection.

There will probably be four different modules. These include a 5,000 mAh powerbank to plug in, a night vision camera, a walkie-talkie attachment and a gamepad. The modules should work directly as soon as they are plugged in. This sounds relatively easy to realize with a Powerbank, but additional software is certainly needed for the night vision camera and the gamepad. We are curious to see how Doogee will solve this.

The night vision module uses a fast lens with an open ƒ/1.8 aperture and a combination of a telephoto and a wide-angle lens. The camera should be 12 times as light-sensitive as a normal smartphone camera, so that you can get bright pictures even at night. The 5,000 mAh Powerbank module doubles the battery capacity of the Doogee S90 to over 10,000 mAh, guaranteeing a long battery life. 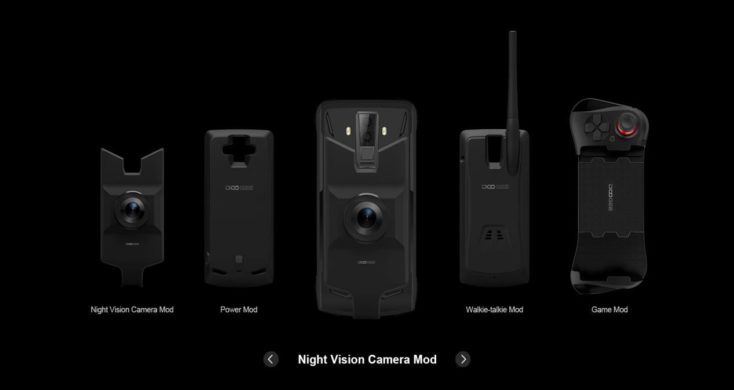 The walkie-talkie module is based on the DMR standard, which covers a frequency range of 400 and 480 MHz. The range should be up to 10 km and even group calls are possible. Doogee is not afraid to promote the module as a very good alternative to commercially available walkie-talkies. The Gamepad does not need thereby many words. It should make the S90 like the Doogee S70 a gaming smartphone, after all it can fall back on the good hardware of the S90 and is connected to the smartphone via Bluetooth.

In order for the S90 to run smoothly, the manufacturer uses the Helio P60 processor from MediaTek. In the past, we have seen this more and more often in China smartphones. The Octa-Core CPU already proved that its performance is in the same league with the Snapdragon 660 from the Xiaomi Mi 8 Lite during our review of the UMIDIGI Z2 Pro. You probably get at least 4 GB, if not 6 GB RAM and at least 64 GB internal memory. 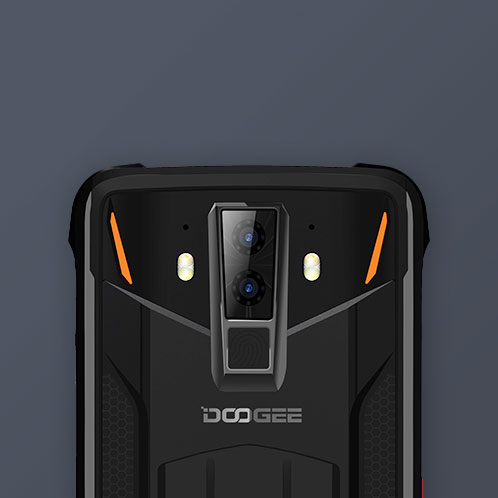 Otherwise Doogee still keeps some information for themselves. We only know that the dual camera on the back consists of a 16 megapixel and an 8 megapixel sensor. There is also a dual SIM slot with LTE support and adapted survival software in the form of an app package.

Actually, outdoor smartphones often lose themselves in trifles and do not concentrate on their real strengths. Will the module concept change that? We don’t know that yet. But we find this concept so interesting that we want to test how well it works. That’s why we asked for a test copy. What should we test with it? How do you find the module concept? Maybe one of you uses a Motorola with moto mods?