0 Kommentare January 18, 2022by Thorben
Hey, guys! Just a heads up: The linked offer is already a bit older and the price of the gadget might have changed or it might not be available anymore.

Doogee, Doogee, Doogee. The manufacturer has not been heard from for quite some time, but it used to attract attention with modular outdoor phones. The new Doogee V20 outdoor smartphone now surprises with a second screen, AMOLED display and wireless charging. Finally again! 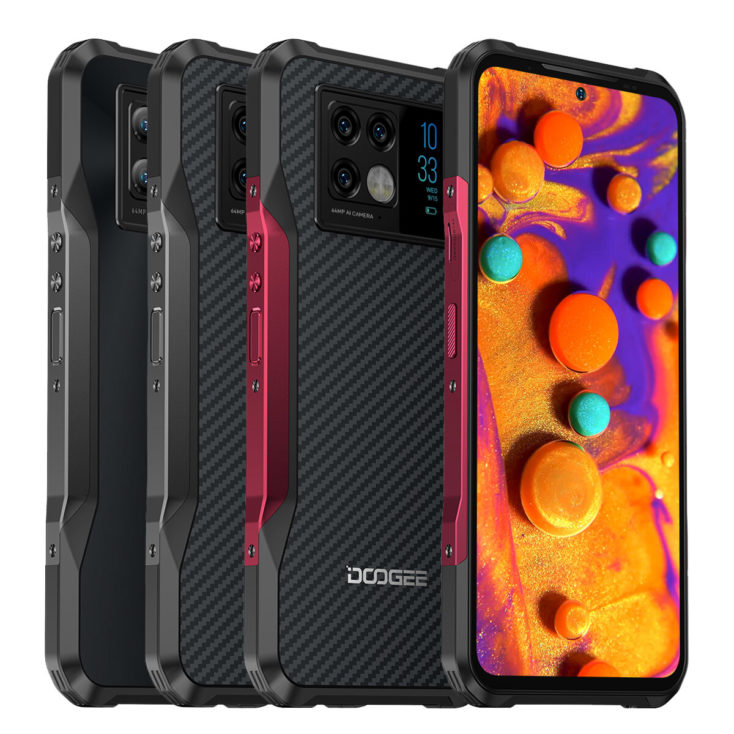 Technical data of the Doogee V20

The Doogee V20 looks more modern than most outdoor phones, similar to the Xiaomi 12, it relies on a central punch hole. This only steals a few pixels of the FullHD+ resolution from the 6.43″ display, which still gives you a sharpness of 409 ppi pixel density. Surprisingly, the manufacturer even opted for an AMOLED display, which is still rarely seen in an outdoor smartphone in 2021. This offers a much higher contrast than LCDs and thus a true black, since the pixels can simply stay off. The fingerprint sensor will not be placed under the display, but on the side. However, the screen is protected by Corning Gorilla Glass.

On the back, you can opt for a carbon look with red accents on the side, if you want. Alternatively, there is also a black or gray colorway that does without the carbon look. The eye-catcher is the camera module on the back, which houses three cameras and the flash. But not only that. Similar to the Xiaomi Mi 11 Ultra, there is also a small display. With a diagonal of 1.05″, the second screen can probably be used as a kind of always-on display – very cool! Furthermore, it also supports music control or answering a call, for example. 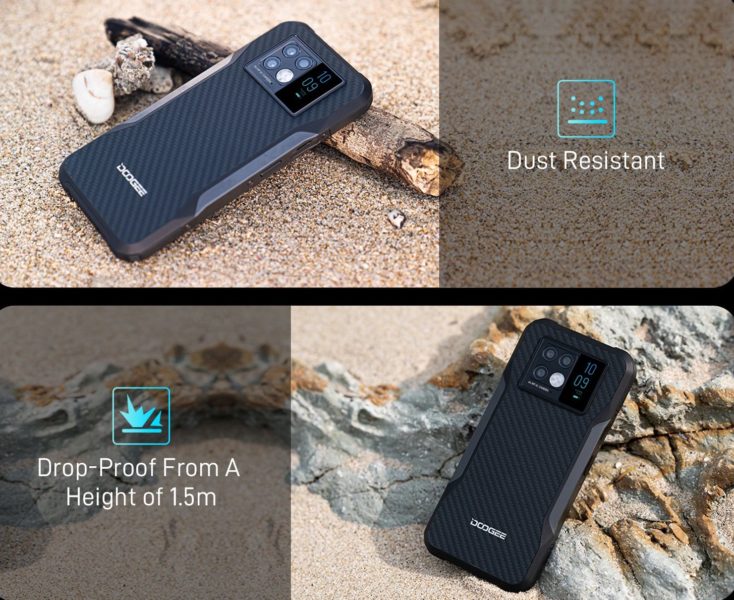 As befits an outdoor smartphone, the Doogee V20 is protected against water and dust according to an IP68 rating. You can theoretically use it under water for 30 minutes and a half, and it is also protected against drops from a height of 1.5 meters. In addition, it has also been tested according to the MIL-STD-810G military standards and can even withstand temperatures down to minus 40° C and plus 80°C.

Like most outdoor devices, the Doogee V20 is not a flagship, but it does not have to be. The MediaTek Dimensity 700 processor is chosen as the clock driver, and rightly so. After all, it is also found in the Redmi Note 10 5G, for example. Yes, you can get much more performance in this price range, but the CPU is up-to-date and offers enough performance for most games as well as social media and everyday applications. In addition, there is even a generous 8 GB of working memory and 256 GB of UFS 2.2 mass storage, which can even be expanded via microSD card if necessary.

Outdoor phones are often equipped with large batteries, just like the Doogee V20. An impressive 6,000 mAh battery capacity is supposed to provide endurance. In combination with the processor and the AMOLED panel, a runtime of a good two days is probably possible. Surprisingly, the manufacturer even integrates 33W fast charging, which should charge the phone relatively quickly despite the large 6,000 mAh battery. Alternatively, it can also be charged wirelessly with 15 W, which other manufacturers could take a leaf out of the book. 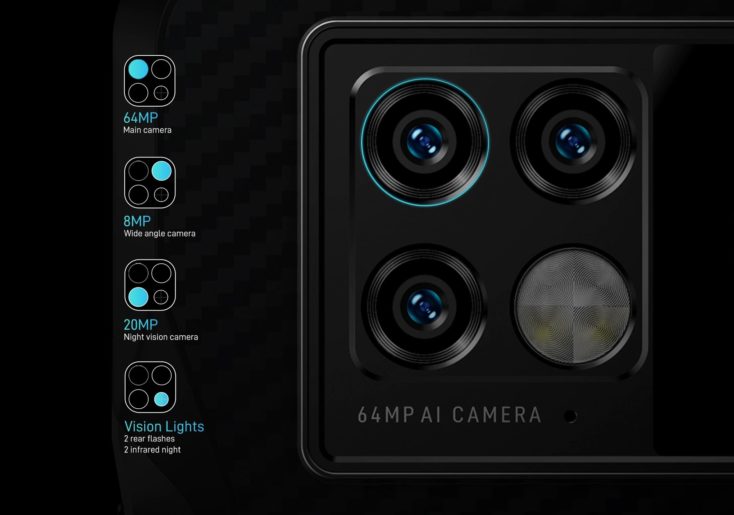 Three sensors are found in the camera module. The main camera is a 64-megapixel Samsung sensor with a ƒ/1.8 aperture, which also works with autofocus. In addition, there is a 20-megapixel night vision camera, the Sony IMX350 sensor was chosen. So that as much light as possible hits the sensor, the camera is equipped with a ƒ/1.8 aperture. In addition, there is an 8 MP ultra-wide-angle camera from Samsung that offers a relatively large shooting angle of 130°. On the front, there is a 16 megapixel front-facing camera from Samsung with a ƒ/2.0 aperture.

Mobile reception is especially important for an outdoor phone. Thanks to the MediaTek Dimensity 700 processor, 5G is even on board, which can be received on both nano-SIM slots. Therefore, the frequency bands n1, n28, n77 and n78, which are important for Germany, are integrated, but LTE band 20 and band 28 are also part of the repertoire. The manufacturer has installed seven antennas around the casing’s edge. 802.11 ac Wi-Fi is available for local Internet. GPS, GLONASS, Galileo and Beidou as well as Bluetooth 5.1 and NFC are also available. Thanks to the hybrid SIM slot, you can either insert two nano-SIM cards or one nano-SIM and one microSD card. The USB-C port, which also supports OTG, is located on the bottom. It is also nice that an extra button is integrated, which can be used for emergency calls, for example, but can also be freely assigned. 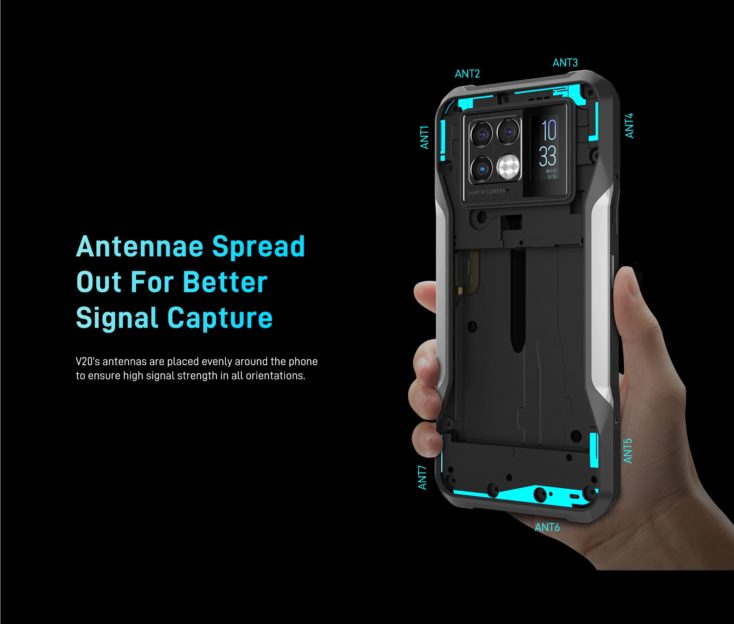 The Doogee V20 runs Android 11, which hopefully leaves Doogee relatively untouched. In any case, the Virtual Toolbag is integrated with an outdoor app, such as an SOS button, a magnifying glass or a compass. Unfortunately, we cannot yet evaluate how good Doogee’s update policy is.

Actually, most outdoor smartphones always follow the same pattern. The Doogee V20 does surprisingly much right with a look at the spec sheet: AMOLED display, fast charging, wireless charging, decent camera setup, IP68 rating and a decent processor. You do not make as many compromises as in many other devices. Still, an even stronger processor and a high frame rate would have been interesting, after all, a phone like this has to perform outside the outdoor context. However, Doogee also charges just under 350€ for this, the first 1,000 buyers get it for $299, which is the equivalent of just under 261€. The sale starts on February 21.

What do you think of the Doogee V20?