2 Kommentare July 18, 2021by Tim
Hey, guys! Just a heads up: The linked offer is already a bit older and the price of the gadget might have changed or it might not be available anymore. 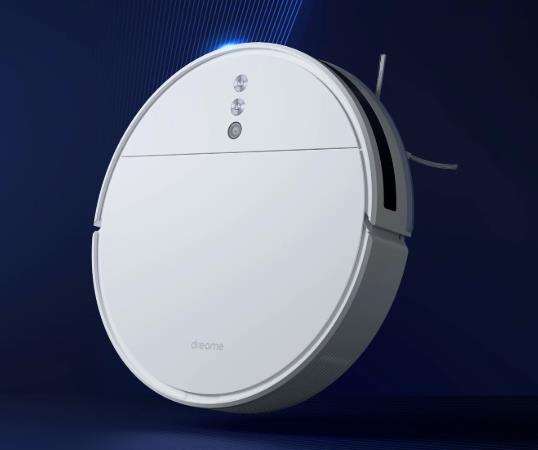 The optical and technical similarity to the Mi Robot 1C can hardly be denied. Here Dreame definitely got help from the parent company. First I thought of a different hardcover with two other buttons on top, but the two robots have some differences. There is no question of construction equality here. Even though the optical sensor (black lens) definitely suggests this.

No LDS, but selective room division

A vacuum robot without LDS (laser distance sensor) has the advantage of being able to be built flat. So the Dreame F9 with a low height of only 8.0 cm. This means that it can be placed under considerably more pieces of furniture than LDS models, which are usually around 10 cm high. The disadvantage: Navigation via laser space measurement is much more precise than other navigation methods. Apparently, Dreame has also thought about this.

Dreame’s first vacuum robot navigates via dual gyro sensor with TOF sensor (time-of-flight; the small black lens on top). With this optical sensor the F9 detects doors and passages. From a technical point of view, the vacuum robot measures distances with the TOF using a time-of-flight method (speed + distance). Optical sensors are devices that use light to detect objects and should not be confused with cameras. We know this principle from the very strongly navigating Mi Robot 1S, which uses it in addition to the LDS. Gyro sensors, on the other hand, measure the robot’s rotational movements from the charging station and thus determine its position.

An implemented SLAM algorithm (Simultaneous Localization and Mapping) enables vacuum robots without a laser tower to create visual maps and display them in the Xiaomi Home (Android, iOS) (Mapping). What is unusual, however, is that these models can also automatically recognize rooms and map them on this map, as the Dreame F9 can. This way, individual rooms can be targeted and cleaned in a pre-defined order.

Selective room division does not only include different colors for the rooms, icons can also be assigned to the respective room. For example, the bedroom can be marked with a bed symbol and the bathroom with a toilet. This has no particular advantage, but serves primarily only as orientation for the user. The owner can also draw virtual walls in the app and thus exclude certain areas or rooms for the Dreame.

With up to 150 min. working time (of course on the lowest suction level) and the 0.6 l dust chamber, the robot is also suitable for larger premises. Since it uses the Z-Shaped cleaning pattern, the F9 also covers all areas and normally does not leave any area out. Z-Shaped refers to the scanning of rooms in straight paths. If the vacuum robot encounters an obstacle in front of it, it turns around and continues in a straight path.

On the underside of the Dreame F9, a 0.2 l electric water tank including microfibre cloth can be attached. The hybrid robot recognizes this automatically and knows that it should wipe. The amount of water that the robot transfers from the tank to the wiping cloth can be set in the app (low, medium, high).

This is nice to have, but since the tank is not a vibration water tank, it can be assumed that the robot cannot exert much pressure on the floor and thus on stains. First impression of the wiping function: The robot will pull a wet rag behind it, as it often does, which can save manual wiping every now and then, but cannot be compared to a mop or similar.

If you say: “Hey, the robot only costs $300, the main thing is that it has a wiping function”, I ask you the counter question: Wouldn’t $250 be more attractive without a wiping function? Everyone must know for themselves. You can use the wiping function with the 5200 mAh battery for up to 90 min. until the F9 has to go back to its charging station.

With the Dreame F9, the signature of Roborock, who produce the vacuum robots for Xiaomi, is clearly visible again. The F9 can be seen as a kind of upgrade model of the Mi Robot 1C, which is now appearing under a new flag. Around $300 is a fair price for the first Dreame. If you want a flat model because of various furniture, but still have a lot of the current top features, you are certainly well served with this. It will be especially interesting to see how well the selective room division works in combination with gyro and TOF sensor. This model stands and falls with navigation. If the laser space measurement is replaced well, the Dreame F9 could become a price-performance hit.

What do you think of the first Dreame? No LDS = no problem?