6 Kommentare April 8, 2020by Tim
Hey, guys! Just a heads up: The linked offer is already a bit older and the price of the gadget might have changed or it might not be available anymore.

Xiaomi’s subsidiaries Roidmi, Dreame and Jimmy are among the biggest competitors of the British top dog Dyson. The reason: The models offer good performance for comparatively little money. The workmanship and design are also competitive in most cases. Now Xiaomis subsidiary Dreame is launching its new top model: We’ll tell you what distinguishes the Dreame V10 from its predecessor. 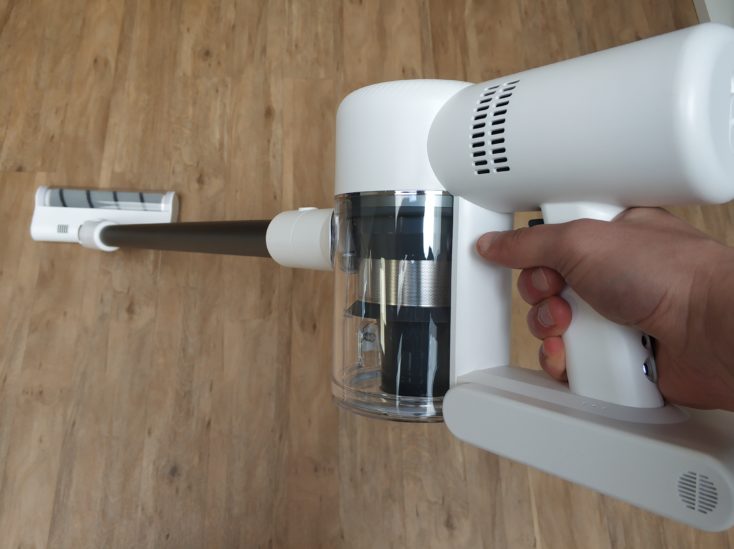 This review deals with the differences between the V9 and V10 models. All further information (what applies to both models) can be found in the Dreame V9 review.

Since the model is still quite new, a slight plastic smell was noticeable when unpacking it – but not so much because of the vacuum cleaner, but because of the plastic covers in which the parts were stored. The smell was gone after one or two days. Otherwise, unpacking is a joyful affair; the cardboard packaging is comparatively chic.

The practical wall mount of the V9, where you can charge the vacuum cleaner directly, can also be found on the successor. The power cable can be plugged in here and the battery is charged via two contact pins when inserted. This is what we want for each model. Screws and dowels are included so that you can mount the holder on the wall in a few minutes and save space.

Quote directly from the operating instructions: “The cradle should be installed in a cool, dark place near a power outlet, in a place where there is no sunlight and not near damp areas (e.g. kitchen).”

Despite the slight plastic smell at the beginning, there is little to complain about with this test factor – as is usual with other Xiaomi subsidiaries. Here it is commendable that the company has stuck with the matt white plastic that it already knew from its predecessor. Not because of the choice of color, of course, but because of the high-quality material. Operating the trigger (to use the suction process) and adjusting the suction stage via a regulator on the back works perfectly and feels good to use. Haptically, Dreame does everything right here – although much similar or even identical compared to the predecessor.

The shutter release button (also called the power button) must be held down like on the Dreame V9 or the Dyson models. Here the opinions differ, what would be more reasonable. Personally, it bothers me to keep the shutter release button pressed continuously. But I also understand the argument that the vacuum cleaner should be lifted from time to time and positioned in other places where continuous vacuuming is disadvantageous and not battery saving. Those who own a 3D-printer can simply force their vacuum cleaner to suck continuously. Here in the video you can see how it works.

Three small LEDs on the handle indicate the current battery status. This means that you can see in good time when the suction head with battery needs to be connected to the socket.

The Dreame V9 is like almost all models today a 2-in-1 model, meaning that the cordless vacuum cleaner can also be quickly converted to a hand-held vacuum cleaner. The CE mark, which is mandatory in this country, is on the suction head and the charging cable. The battery is permanently installed and cannot be replaced.

Even after closer inspection, no manufacturing faults can be found; design is of course a matter of taste, but those who liked the V9 will also like the V10, which is kept in grey. At least a modern design can definitely be attributed to the cordless vacuum cleaner.

Sure, the V9 was already a top-of-the-line device that deserved an upgrade, but Xiaomi is used to a little more innovation and inventiveness than a simple upgrade. According to Dreames’ official statement, performance has been improved by 25%, which can mean everything and nothing. The same goes for the new Space 3.0 turbo engine: a bit of marketing jargon.

At least, like its predecessor or the Roidmi F8, it achieves 100,000 rotations per minute (compare Dyson model V11 Absolute: 125,000 rotations). Before dust and dirt land in the 0.5-litre dust chamber, they pass through a five-stage filter, which is said to have been optimised compared to its predecessor. You don’t really notice much of this.

The differences are also small in terms of volume. With 66, 70, 73 dB (depending on the suction stage) in the V10, we have reached an increased noise level according to the sound level meter, but still largely within the limits. The values were always measured at the loudest point of the vacuum cleaner, so it is a bit quieter when in use.

Visually, the grey-white instead of white-red color selection is immediately visible. Besides the higher suction power, a possibly better filtering and theoretically lower operating volume, the new release of the Dreame V10 doesn’t necessarily make you want more. A simple upgrade of an existing model is certainly justifiable, but the differences mentioned are not so immense that one should put more money into it.

The advantages and disadvantages of the Dreame V10 compared to its predecessor V9 briefly listed:

If you want to look at it positively and not bored: Nothing has deteriorated. Well, at least. But to bring this out as a new model … what do you think?

We’ll soon have all the top models from China competing against the Dyson V11, so you can get a good overview of the state of the battery vacuum cleaners. Currently I see the Roborock H6 in this constellation (a duel in three is a triell, by the way) in front, even though the Roidmi NEX has no display, but LED lights and even a wipe function. None of these models is really cheap, but if you want to make money, the H6 is currently the best choice. It simply has the best performance. We are talking about larger apartments, however; if the area to be cleaned is less than 50 m², models below the $100 threshold will also do the job.

In terms of suction power the V10 can definitely keep up here. If you don’t need display, app, wipe function, LED lights or 90 min. working time, the V10 is the best choice. Sounds pejorative, but the mentioned functions are definitely not so elementary that you would have to pay over $100 extra for one of the other models here. It’s nice that consumers have such a choice here.

Although the Dreame V10 is a touch more chic, more absorbent and higher quality than its predecessor V9, it also costs more. A price difference that I would not be willing to spend privately for these small improvements. However, experience shows that many consumers act according to the “new is always better” principle and the V10 will presumably sell better than the V9 in the future.

My opinion: The surcharge is not worth it, with the Dreame V9 you are well served and don’t have to spend more for an upgrade model. If both would cost about the same, you can also choose V10 with a clear conscience.