0 Kommentare June 8, 2020by Timm
Hey, guys! Just a heads up: The linked offer is already a bit older and the price of the gadget might have changed or it might not be available anymore.

The Earfun Free are the first wireless in-ear headphones from the still relatively unknown Chinese manufacturer. In the past, Earfun has been able to convince with very good Bluetooth loudspeakers, such as the Earfun Go or Earfun UBOOM. Is Earfun building on the success of the loudspeakers with the first headphones? All information in the review! 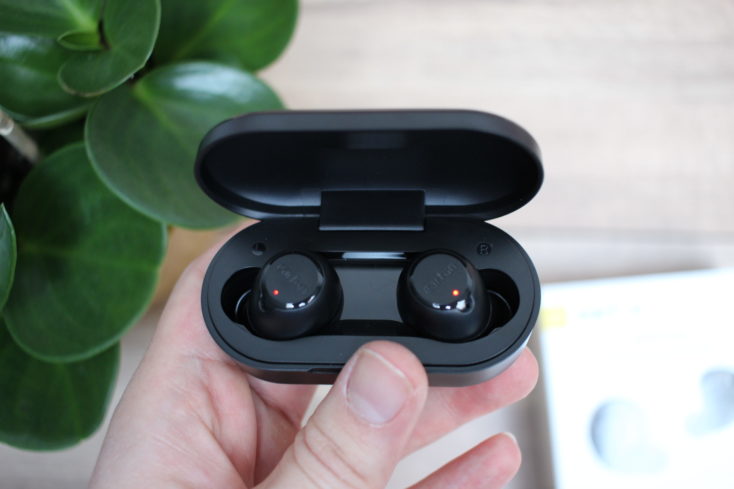 Like the Earfun loudspeakers, the headphones also come in a striking yellow/white packaging. Inside there is a generous foam bed that protects the headphones during transport and presents them beautifully in the receiver and charger box. 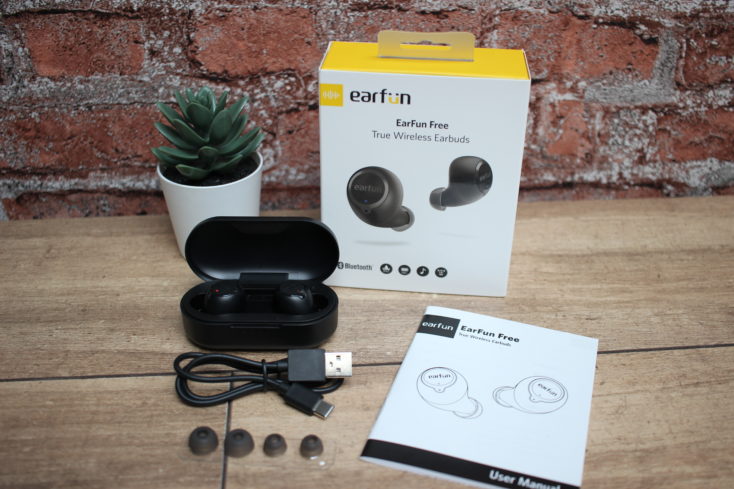 In a smaller box below, there are USB-C charging cables and ear pads in two other sizes. Under the foam there is also a user manual in different languages.

With a weight of about 5.5 g per listener, they weigh about average and are roughly comparable to the TaoTronics Soundliberty 53.

Also the total package of handset and charger is with almost 60 g not really heavier or lighter than other handsets. With the dimensions of about 8.5 x 3 cm the charger has a similar size as the QCY T2S and is therefore rather a big charger. The Redmi Airdots or the TaoTronics Soundliberty 79 are more compact, but they also offer a lower battery capacity. 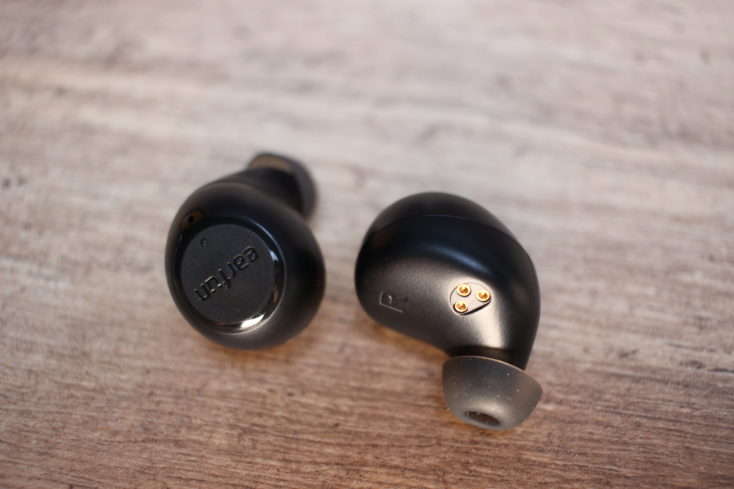 Despite the gaudy packaging, the headphones themselves are rather plain. With black earphones and black charging box, Earfun is taking the classic “safe” route here and is avoiding color experiments. Nevertheless, the Earfun logo is embossed black on black in the lid of the charging box and on the backs of the headphones. The latter is so discreet that no one on the street will notice it.

As always, the handset and charger are made of plastic, but the material is very well made, there are no production or processing defects whatsoever! Especially in relation to the price I have nothing to criticize about the Earfun Free wireless in-ears.

The Earfun Free are equipped with 6 mm dynamic speakers. The membrane used is a graphene membrane, a material which is characterised by high tear resistance and precise swing characteristics. 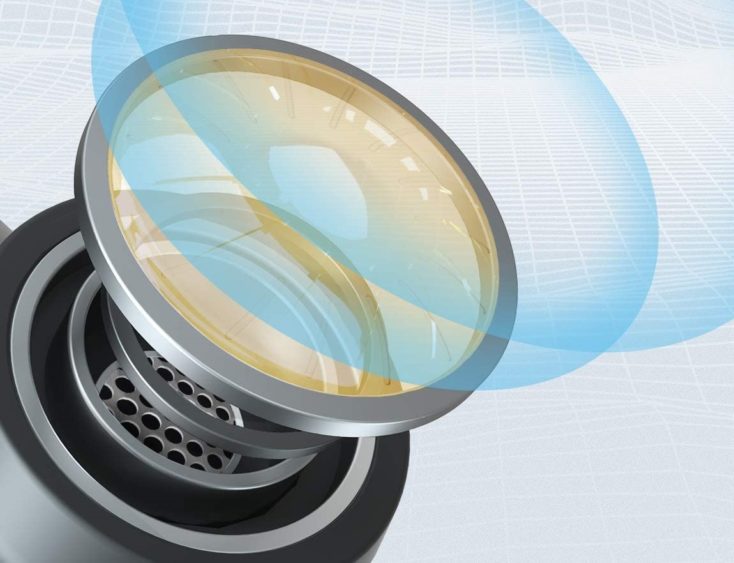 In the test, the Earfun Free could inspire me especially in the bass range. The in-ears have a nice bass and sub-bass, which conjures a strong “booming” in the ear when playing the right music. So the Earfun Free are a lot of fun, especially with bass-heavy music with “fat beats”.

In the midrange voices have a voluminous sound, which also makes it interesting for pop music with focus on a singer. In the upper midrange, however, the precession of the headphones decreases, and tones sound, depending on the interaction with lower tones, a bit more “blurred”.

The high frequency range is nevertheless satisfying for a single driver, especially if you put the sound in relation to the price of the headphones. Compared to hybrid driver in-ears, such as the Soundcore Liberty Pro 2, it can’t keep up in terms of sound precession, which was to be expected considering the technical requirements and the immense price difference.

Compared to the TaoTronics Soundliberty 53, the Earfun Free does a similarly good job and is therefore a great bud design alternative to the popular budget headphones. The TaoTronics Soundliberty 79, on the other hand, performs somewhat worse in my opinion, as it sounds more “muddy” in the high and upper midrange and therefore less differentiated.

All in all I like the sound of the Earfun Free in the test quite well. In relation to the price it offers a powerful sound. As always in this price range, one has to live with slight weaknesses in the upper midrange and high frequencies, but this is also “grumbling” at a high level. Unless you consider yourself a particularly audiophile, you should be more than satisfied with the sound in everyday life.

During my test phone calls with our older test model, the people I was talking to unfortunately expressed minor dropouts or “sagging” in my voice. However, as I was always able to understand my conversation partners well, the problem seems to be not the Bluetooth connection but the Earfun Free microphones.

Earfun had told us about this in advance and assured us that the current batch at Amazon is a new edition where this problem has already been solved. So if you choose the Earfun Free you should not have these problems.

The Earfun Free thus provides a firm hold in the ear that does not change even when jogging in the test – Very good!

While TaoTronics and Haylou allow touch panel operation even in the mid-range class, Earfun keeps up with the Free wireless in-ears and uses ordinary push buttons for operation. 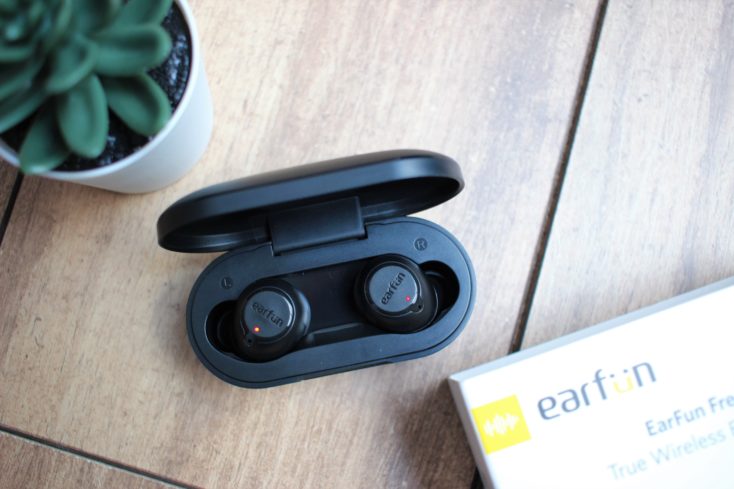 The Earfun Free is equipped with Bluetooth 5 and offers a stable connection of about 15 meters in open space in the test. In closed rooms it is, as always, a little less, especially when massive obstacles such as a concrete wall come in between. Inside a room I still had no problems.

The handsets can also be used separately, which is useful when used as a headset or to save battery power, for example. There is no need to connect the handsets separately to the smartphone. Once the headphones are connected to the phone in stereo mode, they also connect separately – smart!

The handsets are each equipped with a 50 mAh battery. In the test I could listen to music for about 5 hours on average with fully charged batteries and a music volume of 50%-70%. In the charger box there is also a 500 mAh rechargeable battery, with which the handsets can be recharged about 4.5 times in the test. 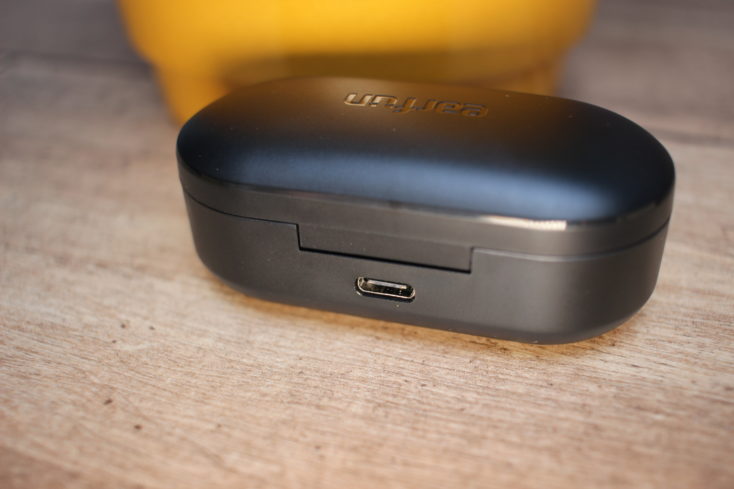 The charger itself can be recharged in about two hours with the included USB-C charging cable. Rather unusual in this price segment is the possibility to charge the case wirelessly. This takes almost twice as long as the USB-C cable.

The headphones are clean and well made without any flaws, giving a solid impression. The design is universal and simple, which should please most people. The battery life of 5 hours is perfectly ok, there are already headphones that offer more, but not in this price range.

The fact that ordinary push buttons are used to operate the headphones did not bother me at all in the test due to their ease of movement. Moreover, they are less sensitive to accidental pressing compared to touch panels. The only thing I have to criticize, unfortunately, are the built-in microphones, with which telephoning can become tiring for the conversation partners in the long run. But in this discipline, many cheap wireless in-ears have difficulties.