0 Kommentare March 23, 2020by Tim
Hey, guys! Just a heads up: The linked offer is already a bit older and the price of the gadget might have changed or it might not be available anymore.

Originally the Deebot Ozmo 920 was not intended for the western market. But since the “slimmed down” and therefore cheaper version of the current flagship model Ozmo 950 is very popular, the model is now also sold and promoted in this country. We show you the differences between the lite version and the current top model. 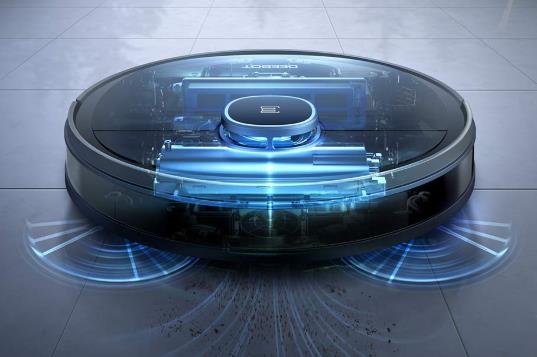 The Ozmo 950 is currently my daily driver in my home and leads our ranking of the best vacuum robots. Even though we always test the different models in different scenarios and apartments/houses, it must be taken into account that there is no one perfect vacuum robot for all rooms. Every home is different and has its own challenges.

The Ozmo 920 was originally aimed only at the Chinese, then only at the French, Italian and Spanish markets. Upgrade or lite versions of a successful model are not only commonplace for smartphones or battery-powered vacuum cleaners, but especially since 2019 also for vacuum robots.

But what are the differences between the Ozmo 920 and the Ozmo 950? In any case, the design has been changed only slightly on the LDS (laser distance sensor) on the top. It becomes clearer when looking at the technical data: Compared to the Ozmo 950, the 920 “only” has a 2600 mAh battery, the 950 has 5200 mAh.

In this respect the potential working time is logically different. The Ozmo 920 has a working time of 110 minutes, the 950 a strong 200 minutes. So the two are separated by one and a half hours working time. This is a significant difference, but for many homeowners it is negligible. After all, one gets along very well with almost two hours battery life, depending on the circumstances. Rooms above 120 m² are absolutely feasible, but above that it gets difficult.

However, Ecovacs has also programmed a solution to the problem of working hours, called “Continued Cleaning“. This allows the Ozmo 920 to return to the charging station when the battery power decreases, recharge the battery and then continue the cleaning process from the last point to complete it. This happens when the battery power is 20% and takes about 3 hours at the station before the robot continues.

If you only let the robot work while you are on the move, you will not notice the process of continued cleaning. Of course, it also depends on how long you are on the road. 😉 Ecovacs is said to have made some changes to the suction stages of the Ozmo 920, but this is not clearly visible from a distance. Maybe one step less?

All the differences not listed here apply to both the Deebot Ozmo 920 and the Ozmo 950. For more information, please have a look at our review of the Ozmo 950.

My first thought about the Deebot Ozmo 920 was: Joa, why not? The second: Why not much earlier in this country too? $100 difference in price to the Ozmo 950 would have been a good idea for some people. After all, the differences are only minimal in design, in the suction stages and above all in the working time. Depending on what kind of premises you own, you can save money and get an almost identical model. As long as Ecovacs does not launch too many lite or upgrade versions, the development of the O920 was a logical and right step.

What do you think: Is a test report with direct comparison worthwhile here?