10 Kommentare October 31, 2018 by Maike
Hey, guys! Just a heads up: The linked offer is already a bit older and the price of the gadget might have changed or it might not be available anymore.

Of course, technical developments are always progressing, but is that always good? This vacuum robot not only cleans the floor but also the air: the Ecovacs Unibot is an alarm system, air filter and SmartHome remote control all in one. This article explains why it is not for sale yet and whether its functions really make sense. 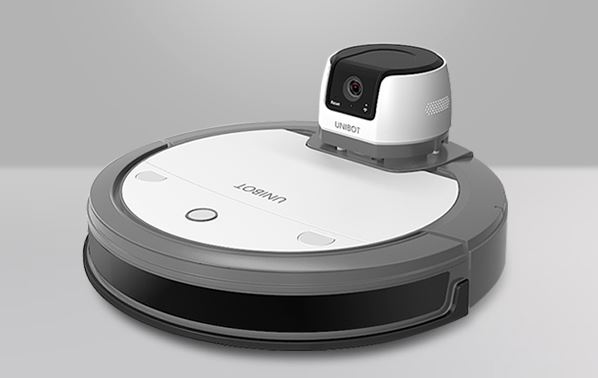 The vacuum robot of the future?

At the CES 2017 in Las Vegas, Ecovacs presented first impressions of its model of the future: Although the Ecovacs Unibot was already carefully announced for 2017 (and then 2018), the futuristic-looking model has practically not yet made it onto the market. There are other reasons for this in addition to the complicated and long development phase (which a vacuum robot with so many functions brings with it).

One reason why the Ecovacs Unibot is not yet on the market is certainly the high production costs – without the manufacturer being certain that a robot with air filter and alarm system will sell at all. After all, the idea behind it is very exciting and sensible – but do you really want to buy all this for a lot of money? Doubtful.

Although the vacuum robot works according to the chaos principle, which is no longer entirely fashionable, it still travels the premises like a snake, i.e. in straight lines from wall to wall, not crosswise. However, the camera is not used for navigation, so the robot does not know which part of the household it is currently in.

Although it has a SMART MOVE technology that is supposed to let it choose a particularly efficient cleaning pattern, this is probably more of a marketing move. The camera can be placed on the vacuum robot and removed again, the same applies to the gigantic air filter (which really is almost the size of a normal air filter). With the latter, the Unibot improves its recirculation air and also filters the air it emits itself. This is not as bad as with normal bag vacuum cleaners, but also exists.

The live image of the camera can be reproduced with the app “Ecovacs”. The Unibot can register burglary attempts with the help of door and window sensors attached beforehand.

This probably works in such a way that the vacuum robot receives a signal when the area around the sensor is moved or the vacuum robot detects changes to doors etc. with its camera. The robot then immediately sounds the alarm and informs its owner about the activities via push notification on his smartphone. So you can also get a good idea of what’s going on at home when you’re out and about.

The functions of the future?

In addition to the security camera gliding over the floor, the robot’s built-in sensors can also be used to detect smoke developments. An alarm signal with a picture is also sent to the owner here. “What Amazons Alexa and the Google Assistant can do, the Unibot has been able to do for a long time”, Ecovacs will have thought – and turned the Unibot into a kind of remote control for the smart home.

The Ecovacs Unibot can operate light switches, blinds or curtains and other devices that can be controlled via infrared. In other words, automation of lighting or darkening of rooms, raising and lowering of blinds, etc. If set correctly, this can also save energy. In addition, the robot reminds you of entered appointments.

Oh well, of course the robot can also vacuum. ?

We are in contact with Ecovacs and will keep you informed as soon as something happens regarding the possibly craziest vacuum robot model. It’s also possible that Ecovacs doesn’t see the Unibot as a sustainable financial model for the future and that it may never appear. Maybe they just want to show what they are capable of.