1 Kommentare October 23, 2018by Thorben
Hey, guys! Just a heads up: The linked offer is already a bit older and the price of the gadget might have changed or it might not be available anymore.

Alfawise works with a wide range of products; at CG we only know EKEN from budget action cams. From a kind of collaboration the EKEN Alfawise V50 Pro emerged, which is positioned more in the middle class. Do combined forces also result in a better product? 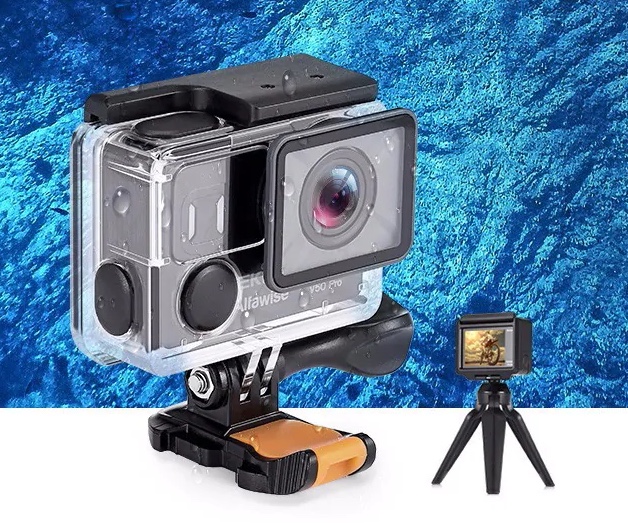 The EKEN Alfawise V50 Pro doesn’t reinvent the wheel, after all it doesn’t have to. At first glance, it is basically similar to any commercially available Action Cam. With dimensions of 5.93 x 4.11 x 2.14 cm, it corresponds to the compact design of an action cam with only three function keys and the display, which occupies almost the entire back. The camera sensor is located on the front, while the power button is located in the opposite corner. Below the sensor are the manufacturer’s names and the reference to “4K+”, which in this context is more marketing than truth. 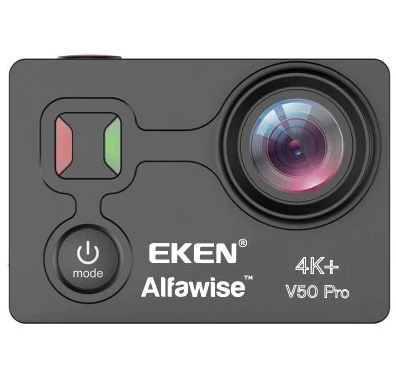 The 2″ LCD screen is located on the back, which unfortunately is not a touch screen. Accordingly, it is operated via the function keys. As there are unfortunately no explicit navigation keys, one has to get along with the power button on the front, the shutter release on top and the WiFi button on the right side. The status LED on the front shows whether you are recording or not.

4K isn’t equal to 4K. And even if some Chinese Action Cams are writing this on their flag, a second look often reveals that the promise can’t be kept. Inside, the Ambarella A12S75 uses a chipset that supports 4K shots at 30 fps. After all, the chipset is also used in somewhat higher quality action cams like the Xiaomi Mijia 4K or the Hawkeye Firefly 8SE.

The Sony IMX258 camera sensor is not quite as convincing, though. It supports 4K recordings, but you have to consider that it was used in smartphones like the Xiaomi Mi 5S Plus. So firstly, it’s pretty old and secondly, it’s not that convincing. In this respect, we already talked about a ” good camera ” in tests at the time. In bad lighting conditions, the EKEN Alfawise V50 Pro is likely to experience strong image noise. The camera offers a shooting angle of 170°.

Another problem we see in the missing electronic image stabilization, at least it is not mentioned with a single word. Only a test can show how blurred shots are in the end effect. Sure, as a time-lapse camera or for slow motion shots, which the V50 Pro supports both, this doesn’t carry so much weight, but it does for normal shots. It’s also a shame that 1080p shots can only be taken at a maximum of 60fps, 120 frames per second should already be standard for beautiful slow-motion shots.

The EKEN can make up for a little bit of this criticism with the included accessories. The battery comes with a 1050 mAh lithium-ion battery, which allows a recording time of 50 minutes. In addition, there is a waterproof case, a remote control, a mini tripod and various mounts with which you can attach the Action Cam to the bicycle handlebar, for example. It’s nice that Alfawise and EKEN deliver a certain basic equipment directly, Action-Cam accessories are available in a larger version but also very often cheap at Amazon.

The corresponding app is Ez iCam. An app that is used with different Action Cams. The app is not really good, but as a rule it serves its purpose, even if there is still some room for improvement in terms of design and functionality.

Too bad, the EKEN Alfawise V50 Pro sounded very good at first due to the good chipset. However, the sensor used seems to revise this first impression again. Of course, qualities such as operation, software, app and processing also play a role. But in the end you want to have nice shots on your memory card.