0 Kommentare June 19, 2022by Jens
Hey, guys! Just a heads up: The linked offer is already a bit older and the price of the gadget might have changed or it might not be available anymore.

The Elegoo Saturn 2 has a 10-inch 8K display and delivers correspondingly detailed results in printing. The print space has also become larger compared to the predecessor. The 3D printer is currently available for pre-order. 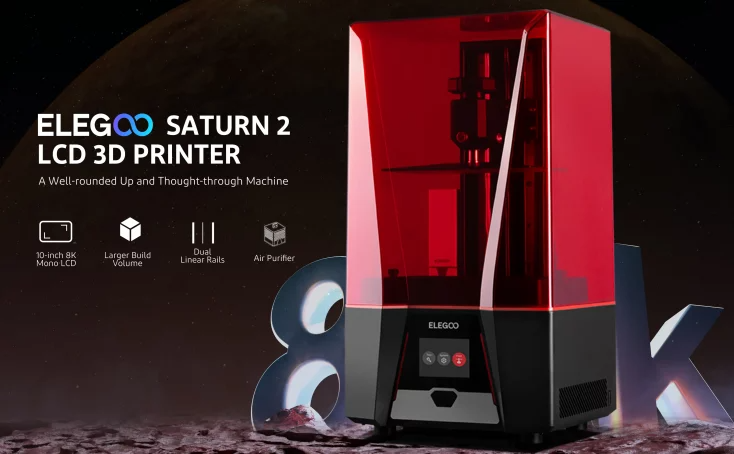 The Elegoo Mars was the first resin printer we tested in 2019. Since then, the manufacturer has been working its way through the solar system and has several Neptune and Saturn models in addition to the Mars series. The Elegoo Saturn 2 is now the latest offshoot of the series and has the highest resolution to date.

The installed display is 10 inches and has a resolution of 7680 x 4320 pixels, which the manufacturer calls 8K here. Well, it is not quite eight thousand pixels, but it is still the largest display so far and another big step after the 4K display in the Saturn (1). The display is also protected by tempered 9H glass, which should prevent scratches. A double Z-axis guide is supposed to provide additional stability. The thickness of the individual layers has not changed much; up to 0.01 mm per layer is still possible. However, lower values are not really necessary in the consumer sector. The speed is specified as 30-70 mm per hour or 1-3 seconds per layer. The values diverge a bit and depending on the print settings, there can be significant differences in the printing time. Like all models of the last few years, the printer has a monochrome display, which already allows shorter printing times than was the case with the old display of the first printers like the Elegoo Mars. There is an air filter with a built-in activated carbon filter that is supposed to reduce odors and harmful fumes. In my experience, no printer has been able to truly eliminate the smell of the resin, but certainly reduce it to a tolerable level.

Price and availability of the Elegoo Saturn 2

The 3D printer is currently available for pre-order, with first models scheduled to begin shipping in July and current orders in August. The price is $550 a proud price, but for which you get the manufacturer’s top model. The current model of the Mars series, the Elegoo Mars 3 Pro, costs just $300 from the manufacturer, which is almost half.

However, if you can wait and want the best and biggest model, you can take a look at the Saturn 2. We got a model in advance and will hopefully be able to share some impressions here shortly. Personally, I’ve had a few months off from 3D printing now, and I’m excited to get going again with a good model.